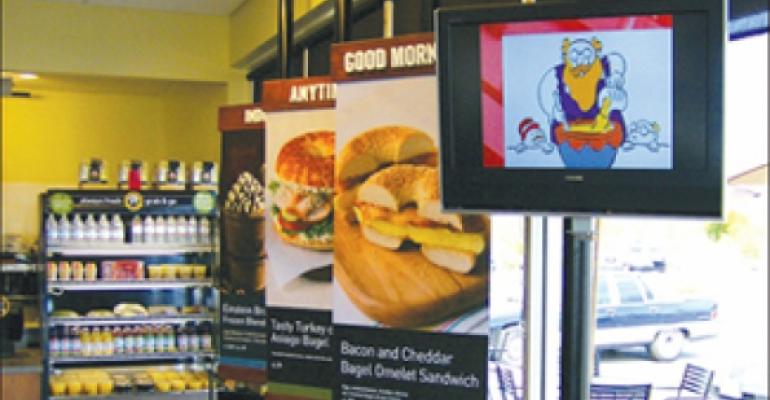 Moving beyond their bagel shop origins, major bagel chains continue to evolve into fast-casual cafes in bids to win back customers who’ve been lured away by bakery-cafe chains and others that have added bagels to their menus.

Bagel segment leaders New World Restaurant Group and Bruegger’s Bagel Bakery, which have nearly 850 outlets between them, are focusing on such initiatives as afternoon snacks, specialty coffees, improved merchandising and increased customer service to ward off further encroachment from the likes of Panera Bread, coffeehouse chains and traditional fast feeders with proliferating breakfast offerings.

While breakfast continues to be the strongest daypart for bagel shops, lunch and late afternoon have emerged as lucrative opportunities for additional sales.

“We have become much more of a restaurant; we are no longer a little bagel shop,” said Daniel Dominguez, chief operating officer of Golden, Colo.-based New World Restaurant Group, whose systems encompass 434 Einstein Bros. Bagels units, 76 Noah’s New York Bagels units and 80 Manhattan Bagel units. Dominguez noted that when he joined the company 11 years ago, all of its bagel brands offered little more than bagels and cream cheese.

Also evolving is Bruegger’s, the 256-unit chain based in Burlington, Vt., that opened its first shop 24 years ago when bagel brands were a novelty.

“We have made the transition from just a bagel bakery into fast-casual positioning,” spokesman Scott Hughes said.

As those brands have evolved, so has interest from potential franchisees, the chains say. Einstein Bros. expects to start franchising for the first time this year, and Bruegger’s said it was expanding at an accelerated pace, with plans to open at least 40 units this year and 50 next year, compared with 25 openings in 2006.

Einstein Bros. is promoting newer sweet and savory bakery items, along with frozen coffee items and, in some locations, espresso drinks, as ideal for afternoon snacks. Last year, the chain rolled out bagel pretzels, frozen coffees, fruit drinks and such sweet baked goods as a cinnamon twist and strudels. Noah’s will get the seasonal blended drinks this year.

Bruegger’s plans to introduce salty snacks and desserts, aimed at midafternoon customers, during the second half of this year.

“We see growth opportunity in the late afternoon,” Hughes said, adding that sales are now about evenly split between breakfast and the rest of the day.

Espresso beverages, now in six outlets, are expected to be added to more units soon, Hughes said. Specialty drinks, such as iced coffees, are offered seasonally.

Combo meals beyond a sandwich with chips and a soft drink are another new twist for some bagel chains. Bruegger’s Duo, a choice of a half sandwich and a half salad or soup, is expected to boost perceptions of value and menu variety.

Although combo meals may convey value, other elements being featured by bagel chains are geared toward establishing a more upscale position. Both companies are rolling out upgraded decor packages and implementing the first of several service upgrades.

“Hospitality is a major emphasis for our company this year,” Dominguez said. One service upgrade is a hand-held ordering system to reduce customer wait times. Crew members walk down the line of customers to take orders, which often are ready by the time guests reach the counter.

“This also makes sure orders are correct instead of using handwritten order forms,” Dominguez said. Crew members offer to deliver eat-in orders to the tables and to refill coffee cups.

The service upgrades, product rollouts and other enhancements appear to be paying off. New World reported a combined same-store sales spike of 4.5 percent for 2006, and Bruegger’s reported a 5.1-percent increase for the year.

Officials of Big Apple Bagels of Deerfield, Ill., whose system has at least 150 units, did not return calls seeking comment on their chain’s plans. But the company’s website depicts a varied menu of breakfast and lunch items, its proprietary Brewster’s espresso and coffee line, and a variety of smoothies.

Some franchisees of Westmont, Ill.-based Great American Bagels, a chain of 48 units in 11 states, have added an espresso bar and a line of smoothies to the chain’s regular fare. Operators are given some decor leeway, and at least one franchisee has added a fireplace, live plants and upholstered chairs to create a cafe atmosphere.