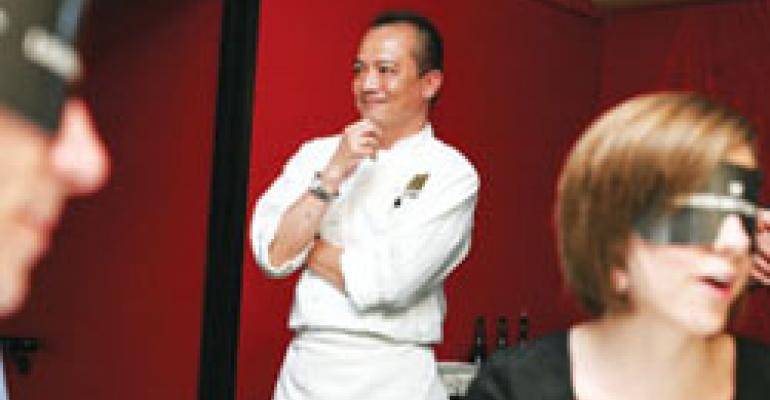 Peng Looi spent a good chunk of the 1980s studying engineering—only to discover he hated the trade.

“The studying part was fun, but the working part was boring,” says the Malaysian-born chef.

Cooking had been a lifelong hobby, one with which he’d later combine his engineering skills to open August Moon, a Chinese restaurant in Louisville, in 1987, and Asiatique, a Pacific Rim fusion spot in the same city in 1994.

Boring as it may have been for Looi, that technical training came in especially handy last spring when he hosted a Lights Out Dinner for about 50 guests. All were blindfolded throughout the two-hour meal, meaning every ingredient had to be carefully considered for how it would taste and smell, and how easily it could be consumed.

“Science plays a very important part in cooking,” Looi says. “Temperature is physics, chemistry is reaction and biology is texture.”

The event was not a cruel joke or some frightful fancy of Looi’s. The Lights Out Dinner was a part of Louisville’s second-annual IdeaFestival, a forum fostering out-of-the-box thinking in multiple disciplines, including culinary.

The meal’s creators believed that with a person’s sight removed, his other senses would work harder to fill in the blanks. Not only would diners have to deduce what they were eating, their guesses would be shared with their equally blind tablemates.

Guests used forks, “but no knives,” Looi says, implying the inherent danger in providing cutting tools to blindfolded diners. Wherever possible, “the food was bite-size, or they drank it, or they used their hands.”

“People really got into it, asking each other a lot of questions,” he says. “After each course, I came out of the kitchen to see if they could figure out what we’d fed them. They didn’t always figure it out.”

A pair of soups—sugar snap pea and gingered carrot-leek—was poured into sake shooters for easy sipping. Despite not seeking to trick his guests, few identified many of the ingredients correctly.

“My food is very flavor-forward, so it wasn’t my goal to fool anybody,” Looi says. “But without sight, things were very different for them.”

In an attempt to sharpen their senses, Looi’s menu reflected a “yin-and-yang approach, to have contrasting flavors.” Proof was evident in the third course: cold foie gras with a cocoa tuile and habanero sorbet. A tiny cocktail served to the side was the “Asiarita,” the house margarita.

“When you’re blindfolded, you work through what you’re eating with your mind first, and then your palate,” Looi says. “Since you’ve removed the visual sensory [component], you’ve got to replace it with something else to give the guest something else to think about.

“Whatever you replace it with, it can’t be something that’s overwhelming. If it’s too much, they’ll stop. You have to give them just enough to make them wonder.”

Without leaving them wandering. Looi designed every dish’s assembly to accommodate right-handed diners. He avoided putting sauces where solids weren’t, so guests didn’t have to blend the two blindly.

“I do all my plates linear—right to left—because people naturally eat [moving from] 3 o’clock to 9 o’clock,” Looi says. “I do this for every dish we serve at the restaurant. I always draw a diagram because I want things consistent. I show the cooks that fish will be here, sauce will be here, tell them how much sauce, how much garnish. Everything is drawn out. Then I prepare a prototype so everyone knows what it looks like. Then I break it down into steps.”

While that meant producing the meal for the blindfolded party was no different than usual for the cooks, it challenged the service staff. Where silence often is key to smooth table service, servers had to communicate with guests both verbally and through touch. Permission was asked, always softly to avoid scaring guests, to clear any item from the table, and a gentle warning was issued when something was delivered, particularly beverages.

“They had to take the guest’s hand and place it on the glass,” Looi says.

Other times, they were directed toward their forks.

“Before the dinner, we worried we couldn’t use regular wine glasses, that they’d break,” he says. “Someone suggested we use plastic, but I knew there was no way we could do that. The aroma of the plastic would kill the aroma of the wine, and they would really be using their sense of smell.”

“What we want to do is get people to see that thinking differently can be a lot of fun, and what better way to do that than through food?” Kimel says. “This was a lot of fun for us, and I’m sure we’ll do more of these next year.”