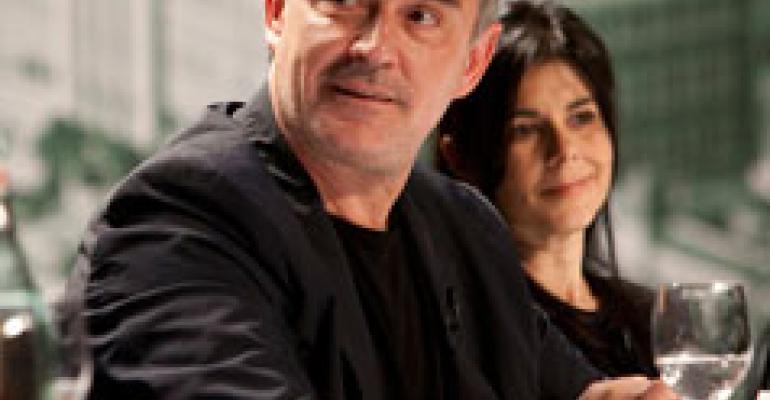 Renowned chef Ferran Adrià will not stop contributing to the culinary world after he closes his restaurant El Bulli this summer.

On Monday the pioneer of avant-garde cuisine detailed his plans for the El Bulli Foundation, a culinary “think tank” that Adrià plans to open together with his partners Juli Soler and Albert Adrià in 2014 at the location of his restaurant in Rosas in the Spanish region of Catalonia.

Adrià was speaking at The Culinary Institute of America in Hyde Park, N.Y., as part of a panel discussion that included Lisa Abend, author of “The Sorcerer’s Apprentice,” a book about Adrià and El Bulli; and two former apprentices at the restaurant, including George Mendes, chef-owner of Aldea in New York.

The foundation, which will be founded on the motto “Freedom to Create,” will work with an operating budget of between 600,00 and 800,000 Euros, according to a report from the Catalan News Agency.

It will grant between 20 and 25 year-long scholarships annually to chefs and front-of-the-house professionals, according to its preliminary mission statement http://www.elbulli.com/docs201001/elBulliFundacion_en.pdf.

The foundation will not be a school, but more a place for research and experimentation, which will be documented periodically. An additional long-term project is a comprehensive encyclopedia of contemporary cuisine.

The former restaurant will be redesigned by architect Enric Ruiz Geli, the CNA reported. The foundation’s mission statement said the dining room will remain intact, “given its emblematic nature.”

“The gastronomic creations, the fruits of the work executed by the cooking team of the foundation, will be able to be sampled every year starting in 2014, during a specific time and by a certain number of clients. At present we are unable to give more specific details as we are currently studying the most adequate model for this new operative,” the mission statement said.

“It seems as if [Adrià] is ensuring his technical and experimental legacy lives on while lifting the curtain to reveal an open-source library of techniques for future chefs to build on,” Baltimore-based food writer John Houser III said. “It’s as if he’s curating his own museum while bringing in artists to create his future work.”