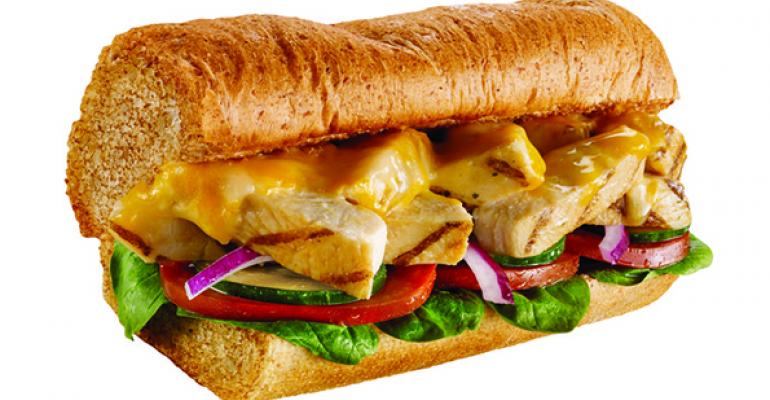 Subway has updated two of its signature ingredients — its chicken and its vinaigrette.

The new grilled chicken strips, like their predecessor, are all-white meat and arrive at Subway’s more than 26,000 domestic restaurants precooked and frozen. Franchisees thaw and heat them in the toaster or microwave.

The strips, which contain no artificial preservatives or flavors, have a more pronounced chicken flavor than the previous chicken, and have visual freshness cues, including pieces of chopped parsley, Subway executive chef Chris Martone said.

“It has a little stronger chicken broth flavor in the marinade, and nice salt and garlic in there, too,” Martone said.

Although the flavor is more assertive than its predecessor, it remains neutral enough to be used in a variety of applications, he added, including the chain’s popular teriyaki chicken and Sriracha chicken sandwiches.

“If you look closely, there are some parsley flakes,” Martone said.

Customers like the look of the new chicken, he noted, but some franchisees needed to be convinced that the parsley flakes were a positive attribute.

“We just let them know that it’s a positive thing to see that kind of particulate in there. The visual cue is nice,” Martone said.

To highlight the new product, Subway has introduced a new Monterey Chicken Melt, which tops the chicken strips with a blend of shredded Monterey Jack and Cheddar cheeses, and is then toasted.

Subway has also replaced its existing vinaigrette, a popular condiment for its sandwiches, with a lighter version.

Martone, who has worked for Subway for more than 15 years, said the new vinaigrette has been popular in Canada for longer than he has been with the chain. The condiment has been in test for a couple of years in some markets, and has been an option for franchisees, he said. This year, the company decided to replace the full-fat vinaigrette with the new one.