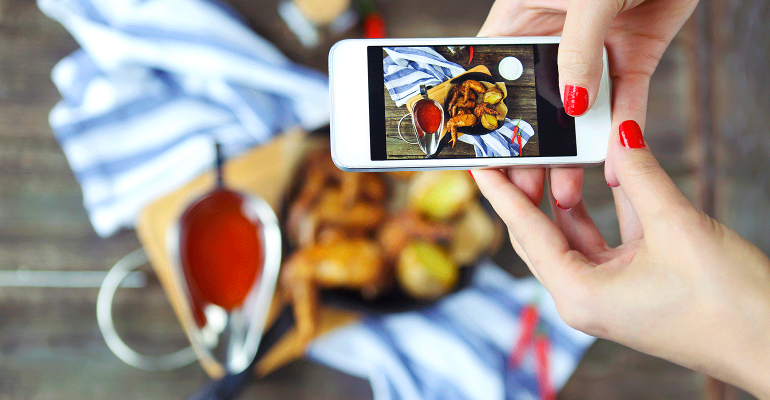 Kruse/Thorn: What is Instagram doing to the food world?

In a monthly series, menu trend analyst Nancy Kruse and NRN senior food editor Bret Thorn debate current trends in the restaurant industry. For this installment, they discuss the frenzy over food photography. Nancy, it’s often said that people eat with their eyes.

I feel compelled to point out that that’s not literally true. Of course presentation is important when it comes to food, but we eat with our mouths, which we use to taste and touch and even smell our food (via nasal passages in the back of the mouth). Food and drink are the only art forms that use all five senses, and I’d put sight in fourth place — maybe fifth if the food is crunchy.

But these days, with so many people broadcasting every part of their lives via social media, appearance has taken on a new importance.

As I write this, there are 217,351,183 Instagram posts with the hashtag #food. No wonder attractive menu items like well-garnished avocado toast (372,269 posts) have become so popular.

Even as companies like Panera Bread have stretched their sourcing skills to do away with artificial color in their menu items, social media is exploding with pictures of rainbow bagels and, recently, Starbucks’ Unicorn Frappuccino.

The super-limited-time offer from the coffee giant changed color from purple to pink, and flavor from “sweet and fruity” to “pleasantly sour” when stirred. It reportedly sold out quickly, helped drive traffic and brought ludicrous amounts of attention.

The Unicorn Frappuccino is gone, but it has spawned unofficial knockoffs that have gone viral, like the Mermaid Frappuccino, a purple-and-green thing that starts with the Pokemon Go Frappucino (vanilla base, raspberry syrup and freeze-dried blackberries) goosed with, for a 16-ounce Grande, eight (eight!) pumps of white mocha syrup, three pumps of toasted coconut syrup and three scoops of matcha powder.

I suppose people can drink whatever they like, but that just sounds gross. But it seems that taste isn’t the point when it comes to items like that.

Of course, there are less lurid approaches to making food photo-friendly — not serving New England clam chowder in a white bowl, for example. But some food that looks good in real life doesn’t photograph well. Should that disqualify it as a valued menu item? Are wonderful but visually unappealing stews like goulash and beef bourguignon destined for the garbage disposal of history?

As a food writer, restaurants have steered me to tables with photo-friendly lighting; one not-so-subtly seated me under a gentle spotlight. But it seems to me that restaurant lighting should highlight the customers, not what they’re putting in their mouths.

But as much as I moan about the visual nature of so much of the food fetishism out there, it is a fact of life for restaurant operators.

So I’d like to ask you, Nancy, with Intagram’s #food hashtag now at 217,353,940 images, how should operators respond in a food world where the importance of form seems to be outstripping function?

The power of the image When readers of our monthly exchanges tell us how much they enjoy it when we argue, Bret, you and I scratch our heads. Fact is, we virtually never disagree; we are in accord on most everything, even though we typically have our own take on any given subject.

I think you know that I have the somewhat dubious distinction of having studied both cinema and Russian literature and history at various times in my long university career. (What can I say? It beat getting a job.) Perhaps I thought that one day this unlikely academic pairing might come in handy, and thanks to your opinion on food fetishism, it finally has.

It’s well known that Vladimir Lenin’s first line of defense in getting illiterate Russian peasants to join his cause was powerful propaganda pictures. He utilized silent films, whose black-and-white images projected on the side of railroad cars were so persuasive, that they reliably rallied the masses throughout the vast countryside and delivered them directly into his ideological tent. From a far less political perspective, I’ll freely confess to you that a still image of Bogart selflessly sending Bergman off into the foggy airport of Casablanca makes me weep as reliably as a shot of Mel Brooks doing absolutely anything makes me smile.

On a more germane note, it goes without saying that the impact of the image hasn’t been lost on food and restaurant marketers. For years, mouthwatering close ups of backlit piles of pearly pink shrimp dripping in butter have driven patrons to Red Lobster as reliably as if Pavlov had rung his bell. What about the photography that appears in the pages of NRN, which makes food the hero and in doing so is both inspirational and aspirational to foodservice operators? And come on, Bret, haven’t you ever seen a dazzling dish put down on the table next to yours and told the waiter that you’ll have what she’s having?

I agree with you that some terrific foods are unfortunately unphotogenic. New York City chef Jonathan Wu talked about this at the recent Worlds of Flavor Conference in Napa Valley. To him, “unpretty” foods in shades of brown that signify hearty flavor and comfort are at odds with contemporary esthetics. I suspect that if gizzards were gorgeous and liver looked lovely, they’d be a much easier sell, and it makes me wonder if we’ll be seeing some new-age version of that old, institutional “G-bop,” the generous bunch of parsley piled on a plate just prior to service in order to amp up its sex appeal and thus avoid that truly scary garbage disposal of history.

I do wonder, though, if you’re talking apples and oranges in your commentary on Instagram. The lure of beautiful food is literally as old as time; after all, Adam chose to bite that luscious red apple over the joys of Eden.

But while Instagram, with its staggering numbers, is supposedly about glorious gastronomy, I suspect that many diners who post on the site are less into the menu and more into themselves. It’s the look-at-me, I’m-too-cool-for-school phenomenon that afflicts much of social media. Operators may post beauty shots as tactics for promoting their restaurants, but I bet lots of diners who follow suit are mostly promoting their awesomeness.

On the subject of menu beauty shots, it’s worth noting that we’re fast approaching the NRA Show, where the Foodamental Studio series offers hands-on instructional workshops. One really nifty session is devoted to food photography and how to make it attractive on social media platforms. It’s geared toward restaurateurs who don’t know how to show their dishes to advantage, and they get to practice with a noted food photographer to learn the do’s and don’ts of layout and lighting, which is very timely given your Instagram data.

Speaking of lighting, Bret, I have a final, serious bone to pick with you. On behalf of all women over the age of 40, I’d prefer to keep the spotlight firmly on the food, thank you very much. From my point of view, that’s exactly where it belongs.