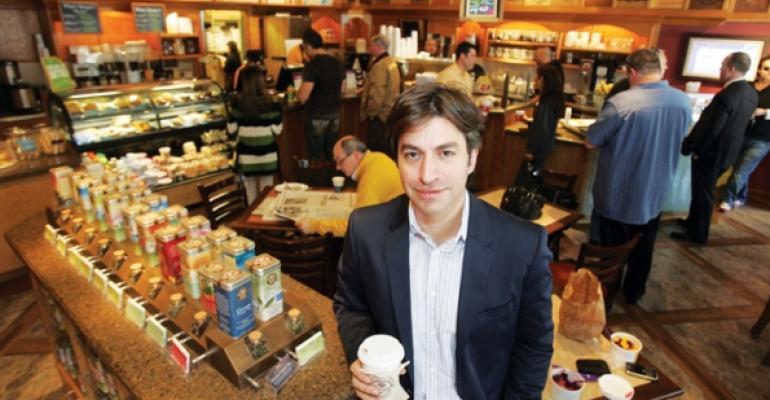 Cafe chains like Starbucks, The Coffee Bean &amp; Tea Leaf, Argo Tea and others are capitalizing on the growing market for tea among U.S. consumers.

When Starbucks announced its agreement to acquire the 300-unit Teavana retail tea brand in November for $620 million, the coffeehouse giant’s chief executive Howard Schultz pledged to “do for tea what we did for coffee.” 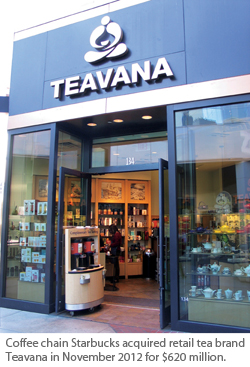 Considering that Starbucks was the chain that brought premium coffee to the masses, that was good news for those who have long promoted premium tea. It was a sign, they said, that tea’s time had finally come, and that coffee-loving Americans are ready to embrace a new brew.

Other observers, however, have expressed skepticism, saying Starbucks was simply looking for a growth story to tell Wall Street and that the coffee company would be unlikely to grow a brand significantly that has the potential to steal its own java junkies.

What Starbucks will bring to the tea world — both with the acquisition of Teavana and the recent launch of a new Tazo Tea store concept — remains to be seen. But others who see an opportunity in the estimated $40 billion tea market aren’t waiting around to find out.

The question is not whether Americans will learn to embrace tea, but how, said David DeCandia, director of tea for The Coffee Bean & Tea Leaf chain, based in Los Angeles.

“The road has been paved for specialty tea,” he said. “Now everyone is wondering and trying to guess how to do it. That’s the golden ticket.”

The Chicago-based Argo Tea chain is growing both in the United States and overseas. The parent of Jamba Juice recently invested in a line of premium teas. And Coffee Bean debuted a new tea-bar concept the 850-unit chain plans to add to new and existing units.

In addition, independent tea-bar concepts, such as the new Seventh Tea Bar in Costa Mesa, Calif., are designed to tap into what they see as growing demand for tea.

According to market research firm Technomic Inc., there is evidence of increasing consumer interest in seeing tea on restaurant menus.

Specialty coffee remains one of the leading nonalcoholic beverage choices among the top 500 limited-service restaurants, and it’s still growing. Specialty coffee offerings on menus were up 10 percent in 2012, according to Technomic’s Beverage Consumer Trend Report.

However, specialty tea offerings also are skyrocketing. Since 2011, tea offerings on menus have grown by 53 percent among full-service restaurants, the report found, and iced tea — particularly Southern-style sweet tea — is increasingly popular at limited-service concepts.

The McAlister’s Deli chain last year debuted a new prototype restaurant that features a stand-apart Tea Bar with signature offerings that go beyond the traditional black-tea blend. Guests can order half-tea, half-lemonade drinks, for example, or customize their iced teas with fruit flavors.

Popular around the world, tea is increasingly being perceived in the United States as a healthful drink, with less caffeine than coffee and antioxidant benefits, as well as being calorie-free if prepared without sweeteners or milk.

Tristano said Starbucks’ move into tea presents huge competitive challenges, not the least of which is holding on to its regular coffee-drinking customers.

Their goal will be to steal market share from soft drinks and other beverages at a time when juices and smoothies are trying to do the same, he said.

Not just for breakfast

According to Technomic’s surveys, most coffee consumers said they would be willing to switch hot coffee for hot tea at some of their coffee occasions. Consumers said they were most open to drinking tea instead of coffee at breakfast.

But modern takes on the brew position tea as something that’s not just for breakfast anymore. 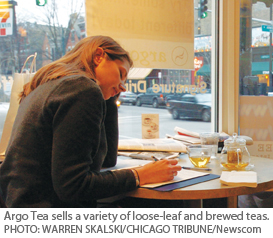 Tristano pointed to concepts like Argo Tea, which is offering beverages like a nonalcoholic piña colada tea, a hot steamed cocoa with mint and tea, and a carbonated Tea Sparkle on ice.

With 30 locations worldwide and plans to continue growing, particularly in the United States and Middle East, Argo also sells loose-leaf tea and bottled drinks, along with a menu of tea-friendly dishes. The company also is moving into a foodservice product line for its teas.

Smoothie players are joining the tea party, too.

The parent of Jamba Juice in 2012 invested in the premium Talbott Tea brand, with plans to introduce hot and cold tea options to Jamba Juice’s menu and sell the packaged tea throughout the chain.

And other coffee specialists also are getting into tea.

In January the owners of the Portola Coffee brand in Southern California opened a new concept called Seventh Tea Bar, designed to offer a cutting-edge tea experience in a hip, “Victorian punk” setting. The menu includes unblended teas from around the world, as well as iced teas on tap and fruit- and herb-infused custom creations.

Tea for the masses

Many see Teavana as the chain that successfully brought tea to the masses — or at least to the mall, where most of the retail brand’s stores are based.

The stores, however, are known for selling loose-leaf teas and custom blends, as well as tea-related merchandise. Only about 5 percent of sales come from beverages served in stores.

With the acquisition, Starbucks intends to change that aspect, turning Teavana into a place where tea drinkers can enjoy a perfectly brewed cup. 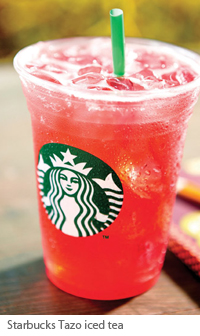 That’s also the focus of Starbucks’ new Tazo Tea concept, which opened in Seattle in November, offering hot and cold teas, drinks like tea latte and snacks like tea-infused shortbread and madeleines.

Schultz contended there’s room for two premium tea brands in the company’s portfolio — though Tazo is expected to take a second-tier role, in the same way Starbucks-owned Seattle’s Best Coffee coexists with its much-larger sister brand.

John Moore, a former Starbucks marketing executive and founder of branding specialty firm Brand Autopsy, noted that Schultz made the same promise of “doing for tea what we did for coffee” when the company bought Tazo Tea in 1999.

Though Starbucks has built Tazo into a $1.4 billion brand, mainly through packaged goods, Moore said tea has never become a major item on Starbucks’ menu.

“If Starbucks was able to do for tea what it did for coffee, then Tazo should have become Teavana,” he said. “It’s important to see what didn’t happen with Tazo. They’ve done nothing but dumb it down.”

Moore said he sees the Teavana acquisition as more of a competitive move designed to protect Starbucks’ market share in the tea category and to offer Wall Street a “surefire growth story.”

Andrew Hetzel, a coffee industry consultant with CafeMakers, based in Hawaii, said the challenge for Starbucks is to create a controlled experience around tea the same way they did for coffee.

“I could see them doing that for tea,” he said, “helping people learn to embrace the complex flavors and experience. No one else has been able to do that yet.”

There is an “open field” for the company that can bring tea to the masses, he said.

“But is there a market for it?” Hetzel added. “That’s not clear.”

DeCandia of Coffee Bean said he believes there is a growing market for tea, which has been a component of the coffeehouse chain since it was founded in 1963. The concept recently refocused its energies on tea, with president and chief executive Mel Elias saying the company would transition from being primarily a coffee roaster to being a coffee and tea brand. 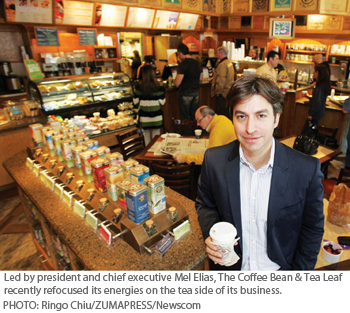 For years, DeCandia said, Americans tended to drink tea only when they didn’t feel well, and they weren’t terribly concerned about the quality or taste. That’s all changing, the same way it changed for coffee, fine wines and, increasingly, craft beer, he said.

“Fifteen years ago, no one knew what specialty coffee was. Now everybody drinks it,” he said. “Now people are looking for higher-quality tea. They want to know where it comes from. They’ve been waiting, looking for that place to go that caters to a tea drinker.”

DeCandia wants that place to be Coffee Bean. In December the chain opened a new-concept tea bar inside an existing Coffee Bean unit, staffed by certified tea specialists — a feature the company plans to grow to both new and existing units.

“We want to convey that we are the authority on tea,” he said.

Guests can experience proper tea service, but also learn about the origins of tea and the company’s sourcing. They can sample blends and try drinks like a “tea cappuccino” — similar to the coffee version with foam — and iced-tea lattes, as well as more traditional cups. Loose-leaf teas also are sold by the ounce for home brewing, and DeCandia makes his own special blends that will vary by store as the tea-bar concept grows.

DeCandia said he has argued for years that tea needs to be “less sophisticated and a little more sexy.” But he also believes consumers will be “romanced” by the stories behind tea and its origins.

“It requires a little more effort than coffee,” he said. “But people want that extra service.”