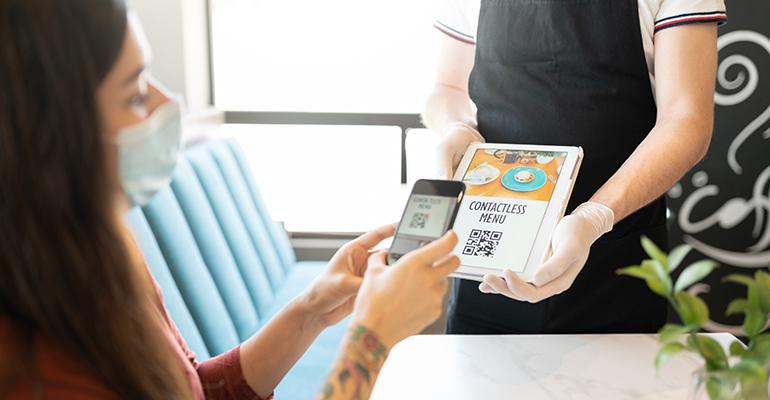 Antonio_Diaz / iStock / Getty Images Plus
QR codes are just one of the touchless technology products on the rise during the COVID pandemic.
Operations>Technology

Touchless tech gets prioritized at restaurant chains during the coronavirus pandemic

Contactless interaction with customers has become a necessity during the coronavirus pandemic, and the technology teams of many restaurant chains have been working hard to streamline guest visits and make the lives of their employees easier.

From QR codes to robots, technology has helped operators respond to people’s needs, which are now changing rapidly, and three technology chiefs discussed their latest efforts with attendees of Restaurants Rise powered by MUFSO in a panel titled Touchless Tech: How chains are reimagining technology with the use of contactless ordering and the resurgence of QR codes. The panel was sponsored by Ziosk.

QR codes, a technology of a decade or so ago that had been falling into disuse before the pandemic, have become an important tool for many restaurants, including Tocaya Organica, a 16-unit “experiential fast-casual” chain serving Mexican food in California and Arizona that’s part of The Madera Group.

“We had to make sure that that experience carried over as much as possible,” as the chain began to experiment with moving away from counter service and toward letting customers order using QR codes at their table, according to Justin Keenen, Tocaya Organica’s director of information technology.

Guests can point their phones at the codes on each table, pull up the restaurant’s menu and order. Each table has its own QR code, so servers know where to bring the orders when they’re ready, and Keenen hired the tech company Thanx to build access to the chain’s loyalty program on top of the Olo ordering software, allowing guests to accrue and redeem points from their phone.

Keenen said about 80% of users surveyed said it was very easy to use. “It’s overwhelmingly positive feedback,” he said, adding that the technology would be introduced to a second location in late October.

El Pollo Loco, a fast-casual grilled chicken chain has around 480 locations, and now has geo-tagged curbside pickup at 95% of them, according to Andrew Rebhun, the chain’s vice president of digital.

Although curbside pickup had been planned for 2021, once the pandemic hit, Rebhun and teams for operations, training and finance worked to launch the service via El Pollo Loco’s app this summer, starting with around 20 restaurants, and then quickly expanding it.

“We had really good partnership across disciplines in the company,” Rebhun said. “It was a six-week rapid acceleration partnership… It was improbable, but we’re thrilled that we were able to bring it to the market, and the consumers were very pleased.”

Customers can opt in to GPS tracking, which alerts the restaurant as they drive up, allowing team members to bring the order right out to their car — there’s even an option to enter the type of car.

Guests that don’t opt in can simple push the “I’m here” button on the app, “and then the crew member will be out with a face mask and deliver the food,” Rebhun said.

The headline grabber is Miso Robotics’ Flippy the robot.

Although named for its ability to flip burgers, White Castle is using the “robot on a rail” to work the fry station. It operates above the fryer, so it doesn’t get in the way of team members.

“It’s actually looking at the oil,” Carrol said. “There’s no more timers. It looks at the products, reads the products, cooks them, shakes them appropriately, cooking very consistently over and over again.”

Flippy works with a smart freezer by Computer Vison that portion-controls and schedules the items to be fried, as well as with a human team member.

“There are different timers, everything’s beeping, we’re asking [workers] to hold some stuff, but most of the things are cooked to order. It’s just a lot to take care of.”

With Flippy’s help, it’s something that one worker can actually manage.

On top of that, “The kitchens are a lot quieter,” because the fryer’s not beeping all the time. The result is a better customer experience, because the food is more consistent, and a better workplace for the staff.

That same Indiana location is testing a new drive-thru menu board with artificial intelligence technology.

Using voice recognition technology from SoundHound, the menu board can listen to and respond to customers. Guests can opt into a “known-user experience” that allows the AI to recommend menu items tailored for them. Or unknown users can be offered popular food and drinks or daypart-specific items “and likely upsells,” Carrol said.

The technology also is capable of doing “basket analysis” — assessing what’s been ordered and making “really good suggestions” of what the customer would like want to add, Carrol said.

The AI can also be mindful of how busy the restaurant is — not overburdening Flippy with more fries if its operating at capacity, for example — and sourcing issues, such as shying away from onion rings if they’re in short supply.

Rebhun said restaurants should consider the sort of technology that makes for smarter sales suggestions.

“I think AI is always part of the conversation,” he said. “Restaurants that aren’t looking into the AI path might be a little behind the 8 ball.”

“If you have a machine that’s poring over constant streams of data, the level of accuracy that you can achieve with that is paramount,” he said, allowing them to get more strategic with offers — suggesting items customers are likely to order and not offering deals or discounts where it’s not necessary.

Keenen said that the next steps to touchless ordering are nuances such as two-way conversations about follow-up needs such as drink refills or dessert.

“People want to know how they’re going to get another order of ranch,” he said.