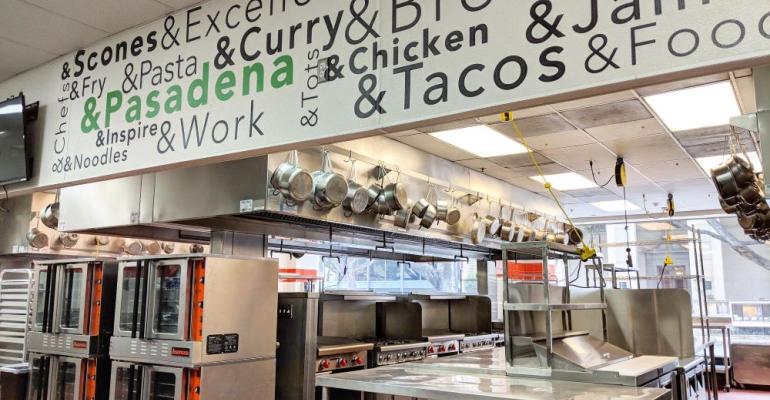 Kitchen United
In the coming months and years, consumers will soon be able to order pickup from a ghost kitchen at the mall while they’re shopping, or get toiletries, snacks and other convenience store goods delivered to their home, all under the Kitchen United platform.
Operations>Technology

Plus, earnings results from Toast, Olo and other tech companies

Tech Tracker rounds up what’s happening in the technology sector of the restaurant industry, including news from restaurants, vendors, digital platforms, and third-party delivery companies.

This month, our main story comes from an interview with Kitchen United CEO Michael Montagano, who gave some insight into the ghost kitchen company’s recent $100 million fundraising round, with investments from a wide range of industries, including Burger King parent Restaurant Brands International; supermarket company, the Kroger Co.; the Simon shopping malls company; and convenience store chain, Couche-Tard / Circle K.

Related: How Miami based PINCHO is leveraging tech, loyalty to ramp up growth

We also have insights from the quarterly earnings of the major restaurant technology players, including Olo, Toast and the third-party delivery platforms, and some more M&A, and acquisition news in the tech sector.

Here’s a breakdown of what you need to know and why:

Related: Why AI-powered forecasting tech is revolutionizing the restaurant industry and how to use it

“We’re looking at areas not only adjacent to our industry and while some people might say they would want to disrupt these industries, our vision has always been to enable these partners to adapt to changing consumer preferences,” Montagano said in an interview with Nation’s Restaurant News.

So in the coming months and years, consumers will soon be able to order pickup from a ghost kitchen at the mall while they’re shopping, or get toiletries, snacks and other convenience store goods delivered to their home, all under the Kitchen United platform. The company’s goal, Montagano said, is to release some of the pressures of on-demand delivery through centralization.

“Our vision is that in order to solve these challenges, there needs to be externalized distribution points that maximize the throughput volume, and enable for pickup and delivery as well as walk-up orders,” he said. “That will allow us to release the pressure on the take rates, bring the customer transaction fees down, and make each delivery actually profitable. We believe that happens by having distribution, technological and physical infrastructure that’s powering delivery all under one hub, and by giving customers more choice.”

In the future, Montagano said, he hopes that this could make transaction fees negligible for operators and increase driver productivity. Moving forward, his team wants to bring more Kitchen United hubs to major markets including a recent expansion into Miami, and soon-to-be new markets, Columbus and Indianapolis, which they will be entering with Kroger. The biggest focus, however, will be to build out spokes around existing hubs in markets where Kitchen United already has a presence to push delivery efficiency to the maximum.

In other technology news….

Around the restaurant tech industry horn, restaurant delivery service Waitr has changed its name to ASAP, to “align with a new company strategy” of delivering anything across all verticals, not just the foodservice industry. Restaurant tech company ParTech has acquired Menu Technologies AG, which will add online ordering to ParTech’s suite of digital capabilities for restaurants. In this month’s segment of tech fundraising news, China-based POS software developer, MenuSifu raised $20 million in a series B fundraiser, with plans to expand its presence further in the US. Robot delivery company Ottonomy raised $3.3 million in a seed funding round and will release the latest version of its delivery bot, Ottobot 2.0, which now includes fully customizable cabins and increased mobility capabilities (including a crab walk).