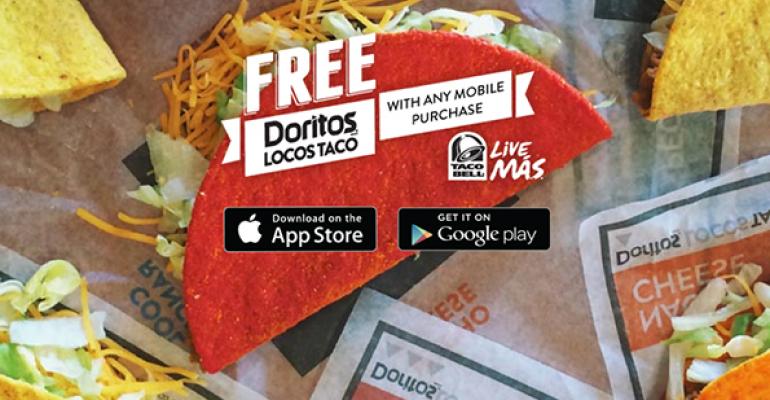 Taco Bell will offer smartphone app users up to a million free Doritos Locos Tacos this month with each mobile purchase.

The offer, which began Jan. 1, is only available with mobile app orders and limited to one per purchase, the company said.

The Irvine, Calif.-based quick-service chain debuted its order-pay smartphone app nationwide Oct. 28, in what Taco Bell president Brian Niccol described at the time as “the biggest innovation since the drive thru.”

Between its launch in late October and mid-December, the app was downloaded to both Apple iOS and Android devices more than 1.4 million times, said Ashley Sioson, a spokeswoman for Taco Bell, in an interview Friday.

Sioson said the offer was a way of expressing thanks to customers, as well as developing more interest in the mobile app.

The free taco offer was advertised on the company’s app download website, as well as in television commercials during the ESPN broadcast of the Sugar Bowl national college football playoff on New Year’s Day. The offer is available until a million tacos are given away, or Jan. 31.

The giveaway was also promoted on Taco Bell’s social media channels, such as Twitter and Facebook, with the #OnlyInTheApp hashtag.

“The DLT giveaway adds to the list of #OnlyInTheApp offerings, including $1 Freezes and early access to products like $1 Crunchwrap Sliders,” Sioson said in an email. “Early and exclusive accessibility for select menu items #OnlyinTheApp will continue to be an added value offering for mobile app users throughout the year.”

The mobile app was the first step in a series of innovations and new features for Taco Bell, Niccol said. The company released a new version on iOS Dec. 19. Further innovations may include catering orders.

Taco Bell, a division of Louisville, Ky.-based Yum! Brands Inc., has about 5,800 units in the United States and 250 restaurants abroad. In early December, the company announced leadership changes and plans to add as many as 1,300 locations overseas.