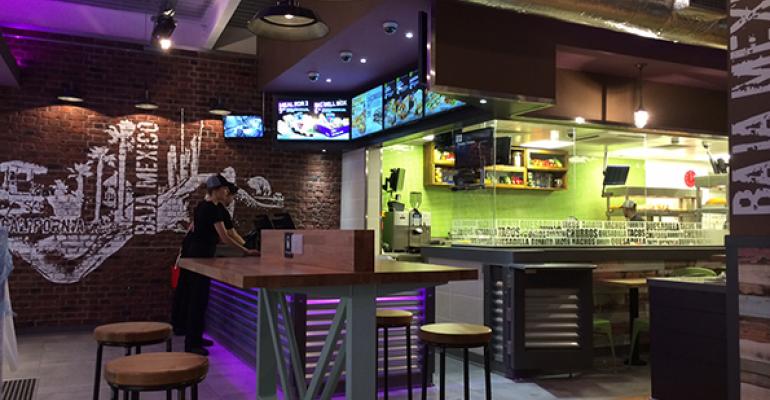 With about 5,800 units in the U.S. and roughly 250 units internationally, Taco Bell has long operated primarily as a domestic brand.

Parent company YUM! Brands Inc., however, is planning to change that domestic focus by turning Taco Bell into more of a globe trotter, alongside world-spanning sister chains KFC and Pizza Hut.

For Taco Bell, the international push comes as the Irvine, Calif.-based chain also works to add 2,000 restaurants in the U.S. as part of an overall goal to reach $14 billion in sales by 2022.

The plan to add 1,300 international units alone would generate an estimated $2 billion in sales, the company said.

Taco Bell has shown the strongest same-store sales of any core YUM brand in recent years, benefitting from the national rollout of breakfast earlier this year, as well as from menu innovations like the popular Doritos Locos Taco platform. Last month, the chain rolled out a mobile ordering system that could also be a game changer.

“In addition to our focus on innovation, new daypart expansion and delivering world-class operations, another key element to our growth strategy includes focusing on restaurant development both domestically and globally,” said Brian Niccol, Taco Bell’s president, in a statement on the international push.

In 2014, Taco Bell and its franchisees opened nearly 200 restaurants in the U.S., which he described as a record-setting year for the brand.

“I’m confident that these changes to our leadership structure will help us make Taco Bell a brand that people champion around the world,” said Niccol.

The leadership changes include a shift in duties for Melissa Lora, president of Taco Bell International, who will now focus exclusively on emerging growth business outside the U.S.

Meredith Sandland, the chain’s former vice president of development, was promoted to a new role of chief development officer, where she serves as a single point of contact for development.

Taco Bell will look for experienced franchise operators around the globe, with an emphasis on Europe (United Kingdom and Poland), Asia (Korea, Japan and Thailand)  and Latin America (Chile and Peru), as well as India.

The chain currently includes franchised units in 26 countries, though mostly in small batches. At the end of fiscal 2013, the largest numbers of Taco Bells outside the U.S. were in Canada (35) and Puerto Rico (36).

By comparison, Louisville, Ky.-based YUM’s other brands include more than 6,200 units in China at the end of 2013 – including KFC and Pizza Hut, along with the Little Sheep and East Dawning brands there. The company also had 725 units in India, and another 15,000 units in other foreign countries.

Overall, YUM operates or franchises 40,000 restaurants in 125 nations and territories.

One of the most recent international Taco Bell locations to open was in Sheffield, England, in September, for example, where an 80-seat, two-story Taco Bell opened on the high street there, one of four within the U.K.

YUM has struggled with its KFC units in China following a food-safety scandal there in July that sent same-store sales plummeting.

Company officials, however, have pledged to make a strong recovery in China, continuing to invest in new-unit expansion with 700 new KFC stores planned for 2015, along with 250 more Pizza Hut restaurants.

In a recent report about YUM’s prospects, Wall Street analyst Mark Kalinowski of Janney Capital Markets noted “chatter” that the company could consider spinning off Taco Bell – something he did not expect to happen anytime soon, in part because of its domestic focus.

Taco Bell  “just doesn’t seem to be a brand that succeeds to a wild degree in several other countries in which it has been tried, ranging from the United Kingdom, to China, to Australia, to Poland, to Singapore,” Kalinowski wrote.

However, he added parenthetically, “In our view, they’re missing out. We love Taco Bell from a customer standpoint.”