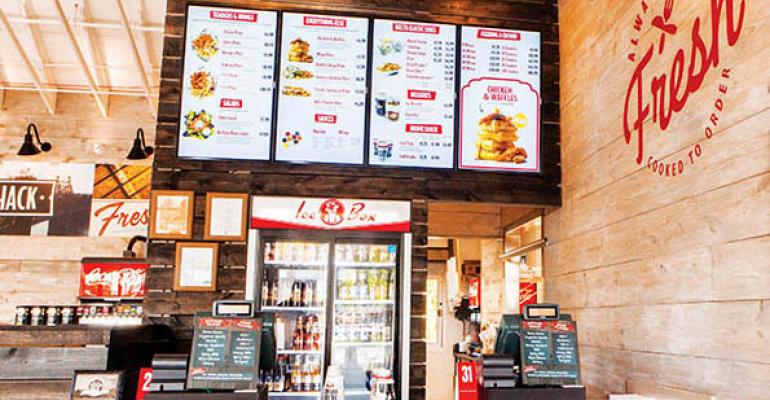 Operators report a good return on investment after installing the new technology.

There’s no denying the benefits of digital menu boards: easy-to-read graphics and attractive animation; the ability to change menus from any location via the cloud; and, in some cases, interactive components.

Multiple restaurant chains have reported sales increases at locations using digital menu boards inside and at the drive thru, and operators report a good return on investment.

Still, price has been a barrier to many restaurants unable or unwilling to spend low-five-figure sums per unit to step up to digital. But that appears to be changing, even at smaller chains, as hardware and software costs decline, and operators focus more on the promise of the technology rather than its price.

Facing a full upgrade of its static menu boards, 14-unit Slim Chickens, based in Fayetteville, Ark., recently began to convert to digital. At its first restaurant, the sales impact was immediate, said cofounder Greg Smart. Not only has the cloud-based content management system allowed him to change the positions of certain menu items and specials remotely from his corporate office, he said customers continually comment on how much they like the new boards. He even changes prices depending on the daypart.

“We have it set to populate the display with new content automatically every 5 minutes,” said Smart.

Dessert sales have doubled and drive-thru order times have decreased, a bonus he credits to the ease of reading the new outdoor display.

With static boards, customers often stand and stare for several moments before making a choice and walking to the counter, he said.

“But with the digital experience, we can drive their eyes to signature and core items,” he said. “I watch customers closely, and I believe it helps them feel confident with what they order.”

Without disclosing the exact price, Smart said outfitting one restaurant with new boards costs about two-and-a-half times more than static boards. Still, he called the investment, “worth it, because at the very least the guest is having a better experience. But we already know it helps our sales.”

While undergoing a brand reimage, James Coney Island, a Houston-based chain of 20 restaurants, decided to move to digital as it changes its name to JCI Grill. Company president Darrin Straughan said the new name better reflected the restaurant’s fast-casual positioning, and that better menu boards fit its more upscale image.

Much as was done two years at 192-unit Pei Wei, JCI Grill’s digital menu boards are mounted on a wall near the order counter. Straughan said that allows customers to browse the menu at ease instead of feeling pressured to order under the waiting gaze of a cashier.

Each cash register also has a customer-facing screen featuring the entire menu, just in case guests forget or want to change their minds.

“It’s a 22-inch screen that looks like a giant iPad for the customer,” said Straughan, adding that cue throughput times have decreased with the new boards. “Our cashiers are trained to memorize the menu as it looks from the customer’s viewpoint. It makes it easy for them to understand, and they don’t have to feel uncomfortable staring over the cashier’s head looking at a static board.”

Monitoring his sales mix, Straughan works through the cloud to reposition or delete slow-selling menu items or change their appearance to prompt customers to see them.

“We’ve been in business for 91 years, and a change like this is part of how we’re trying to appeal to that younger 24-to-35 demographic,” Straughan said.

“So when we hear those customers say, ‘We love it. It’s more modern,’ we’re really happy,” he said.

Also amid a brand evolution, 400-unit Taco John’s considered converting to digital menu boards. Yet after examining the cost, the chain’s corporate leadership and franchisees decided to make capital investments in other areas of their businesses.

“So we decided that the best investment at this point was aligning our menu strategies with how our current customers are ordering,” Waara said.

“What we came up with has been really good for better merchandising of our LTOs, and it’s also helped with ease of ordering convenience and speed of service for customers,” she said. “We’ve had a really strong response to the excitement around all of our new marketing, but most of all, guests have responded to the menu board refresh.”