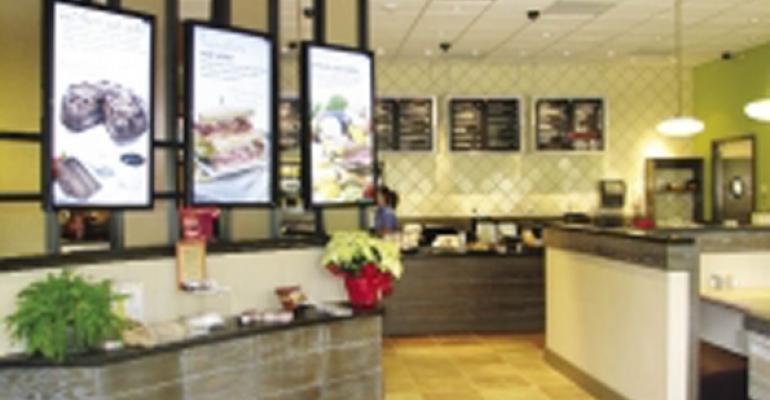 Digital displays amp up the menu

Burger King’s recently completed rollout of digital menu and marketing boards to nearly all domestic locations marked a first among large chains, but it was just one of several recent developments suggesting that the technology is gaining momentum among multiunit brands.

In addition to Miami-based Burger King, the Tim Hortons bakery-cafe chain this month said it was on track to have digital menu and marketing boards in place at more than 3,000 Canadian locations by the end of the year, and had nearly 2,000 of its 3,326 stores in that country outfitted with the technology as of July 1. The Oakville, Ontario-based chain said some of its 700-plus locations in the United States already have digital signage, including 99 dual-brand Cold Stone Creamery-Tim Hortons sites.

Few chain officials have directly tied the use of digital  menu and marketing boards to changes in sales, and most have not shared details about how the technology may impact menu mix.

However, proponents cite its ability to simplify making changes to menu pricing, images and promotional messaging and to present attractive still or moving images of food or commercial clips. Those characteristics, they say, can simplify operations, better engage consumers and change their behavior at the point of sale, as well as help manage inventory by promoting overstocked items.

And while publicly stated return-on-investment timelines for digital menu and marketing boards are rare, a few chains have gone on record with their findings. In a written statement last year, officials of the 307-unit McAlister’s Deli of Ridgeland, Miss., cited a 12-month break-even point for the menu-board technology tested by that fast-casual chain.

Some chain operators, including Cheryl Bachelder, chief executive of AFC Enterprises Inc., parent of Popeyes Louisiana Kitchen, see digital menu boards as a possible solution to the managerial and presentation headaches they expect from pending federal rules around menu labeling. Bachelder shared that opinion at the recent MUFSO Supershow conference in Dallas.

Burger King and Tim Hortons’ initiatives are believed to be the first deployments of fully digital menu-board systems among large North American foodservice operators. An earlier rollout to 12,600 McDonald’s restaurants in the United States involved a single menu-promotion board dedicated to the McCafé beverages line. However, some smaller players, such as 170-unit Pei Wei Asian Diner of Scottsdale, Ariz., beat them to the punch.

A number of international chains, including Wendy’s, are including digital menu and marketing boards in their latest prototype designs, as are some emerging chains, such as 91-unit, Atlanta-based Wing Zone.

And some large chains, including Dairy Queen and Subway, have not replaced conventional menu boards but are testing or slowly deploying in-restaurant digital marketing displays. Milford, Conn.-based Subway, as of March, had about 1,000 U.S. locations outfitted with 42-inch flat screens that play Subway TV & Radio content and are visible from the service line.

Dennis Clabby, vice president of purchasing for the Subway-franchisee-owned Independent Purchasing Cooperative Inc., said Subway TV & Radio is a “cost-effective program to help our franchisees reach their customers with timely product and promotional messages that influence customer behavior at the counter and increase sales.”

Officials of Burger King’s parent, Burger King Worldwide Inc., have said little publicly about the rollout of the digital menu boards. But according to one large franchisee, they are saving labor hours and spurring sales of promoted items.

“It looks beautiful, and it is definitely clean,” Myrna Schultz, vice president of marketing and development for SRAC, said of the new digital menu displays. “It has a good effect [on sales], particularly related to add-on-type items. I think we’ve all been pleased with the results.”

Employees like the menu displays, and “consumers love them,” she added.

Schultz said that while she did not have any data related to sales trends she can attribute solely to the use of the new technology, its “mouth-watering appeal” has been felt.

“Burger King [corporate] decided to push down a brownie sundae animation, [and] it had such a huge impact that we didn’t have enough product,” she said of a stand-out use of moving images on the digital menu boards about six months ago.

“The beauty of it, though, is that you can take [a promotional item] off when you need to,” Schultz said.

She said using digital menu boards “saves a tremendous amount of time” from a labor-hours standpoint, as store-level employees don’t have to worry about updating prices or merchandising materials. From a corporate standpoint, “there is more to do, but it is not crazy,” she added.

SRAC incorporates nutrition information on the digital menu boards in the California markets where that information already is required.

Schultz said deploying the digital menu boards required coordination among multiple parties, including her company’s information technology group and outside installation teams hired by the technology vendor. She said SRAC surveyed its restaurants to make sure they met the installation requirements outlined by the vendor and removed the old menu hardware on or near the evening of the installation.

“Then it was up to our IT guys to make it work with our prices and the content we wanted to display,” she said.

Schultz said content creation is overseen by Burger King’s marketing group, and there is both franchisor-mandated and optional menu content. Her company manages each restaurant to ensure it has the right promotions in place, as well as any animations it wants running. If needed, she said, SRAC can assign menu content to restaurants across an entire market with a mouse click on a virtual button.

“Some content is pushed to the restaurants by Burger King [headquarters],” she continued. “We introduced new chicken sandwiches [systemwide] last week, and rather than having every franchise group or restaurant going in and changing their own menu boards, it was an automatic push. It worked fine.”

According to Schultz, SRAC uses four menu-display panels in its restaurants, while some others go with five.

The hardware package cost about $8,500, she said, but with other associated expenses, the upfront tab was about $10,000 per restaurant; the technology vendor charges a monthly maintenance fee. Some of the cost was rebated or otherwise offset by the franchisor.

At Tim Hortons, the cost of purchasing and installing digital menu and marketing boards is being covered by the chain’s advertising fund, so there is no additional upfront expense for franchisees, officials said.

The ad fund established a revolving line of credit to cover the cost of in-restaurant LCD displays and media players for digital menu and marketing boards, as well as rotating drive-thru menu boards and other ancillary equipment. As of July 1 Tim Hortons had borrowed $42.5 million, according to chain documents. Its menu-board-initiative debt is being repaid using the standard percentage-of-sales contributions to the ad fund from all franchised and company-run restaurants.

Alexandra Cygal, Tim Hortons Inc. manager of public affairs, said the ad fund was chosen to pay for digital menu boards and drive-thru menu improvements “because we view it as another promotional and advertising tool that drives incremental purchases [and] promotes community programs,” among other benefits.

“It’s a big positive for us,” she continued, “because we are able to have a consistent image across the chain.”