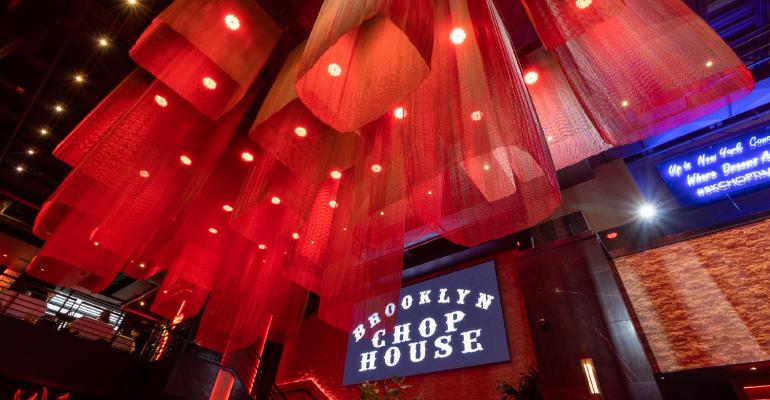 Although it was still under construction as of March, when it’s complete, the Brooklyn Chop House NFT Lounge will be an exclusive club for big spenders within the non-fungible token community, where members have each bought a Brooklyn Chop House-branded virtual image for $8,000 (silver membership), $25,000 (gold) or $100,000 (platinum).
Operations>Technology

Are NFTs the future for restaurants — or a novelty?

At Brooklyn Chop House — a trendy new Asian fusion-inspired steakhouse in New York City’s Times Square — consumers will be able to order dumplings, chops and lobster on the ground floor or take the elevator down to the exclusive club level, where only NFT members will be allowed to enter.

Although it was still under construction as of March, when it’s complete, the Brooklyn Chop House NFT Lounge will be an exclusive club for big spenders within the non-fungible token community, where members have each bought a Brooklyn Chop House-branded virtual image for $8,000 (silver membership), $25,000 (gold) or $100,000 (platinum). At the platinum level, members get primetime reservations for up to 40 guests per month, culinary service on-board private jets, and car service to and from the airport, combining the exclusivity of a private club with the thrill of financial investment.

“These [NFT investors] don’t want to socialize with the outside world — they want to socialize amongst themselves,” said Brooklyn Chop House and Brooklyn Dumpling Shop owner Stratis Morfogen. “We’re offering packages where we can take care of your private plane. We’re dealing with a very rich demographic here.” 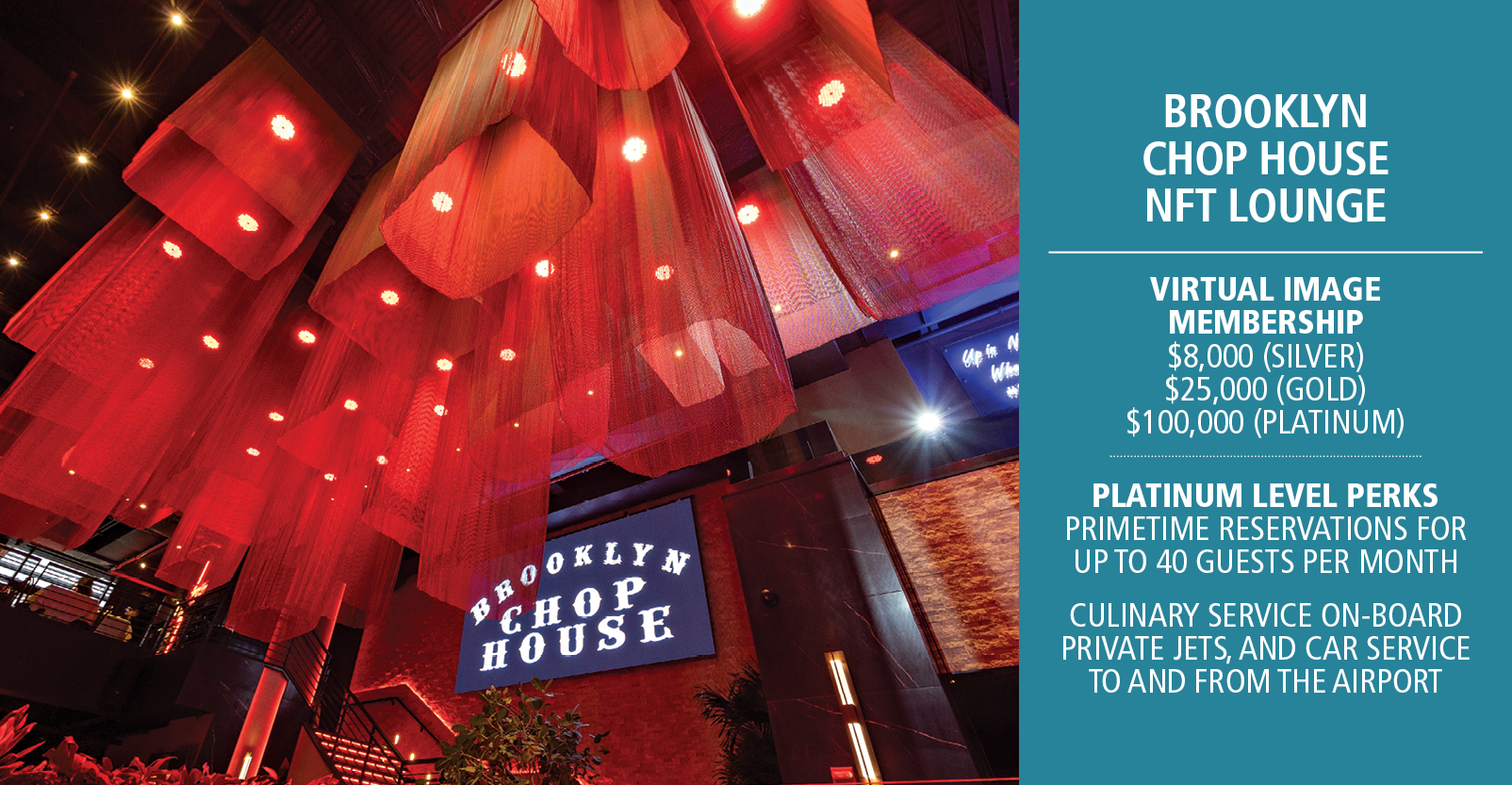 Brooklyn Chop House, home to its own NFT lounge

This hyper-exclusive club for wealthy NFT collectors is an ongoing trend within the burgeoning digital asset community. Global restaurant brand Chotto Matte, with locations in Toronto, London and Miami, is selling its first and only Founder’s NFT for $1 million in April, which gives the owner exclusive access to Chotto Matte locations, events, first class airfare, tickets to sporting events and more.

Meanwhile, VCR Group, led by entrepreneur Gary Vaynerchuk, began selling NFT memberships on the NFT market Opensea.io to a seafood-focused supper club called Flyfish Club that is not even scheduled to open until 2023 in New York. In January, 1,151 Flyfish memberships sold out within minutes, raising an initial $14 million. While that NFT membership gets one through the door, food and drink will be sold separately at the future dinner club. Similar to the Brooklyn Chop House/Dumpling Shop memberships, when these NFTs are resold on Opensea, VCR Group gets a percentage of every sale.

“I'm very bullish on NFTs — they are going to change all industries,” said Flyfish Club cofounder and restaurateur David Rodolitz. “The idea of being the first membership club wrapped on the blockchain and converting a membership into an asset was really exciting to me and my partners. NFTs were a way for us to have a stronger business model to amplify ‘IRL’ experiences.” 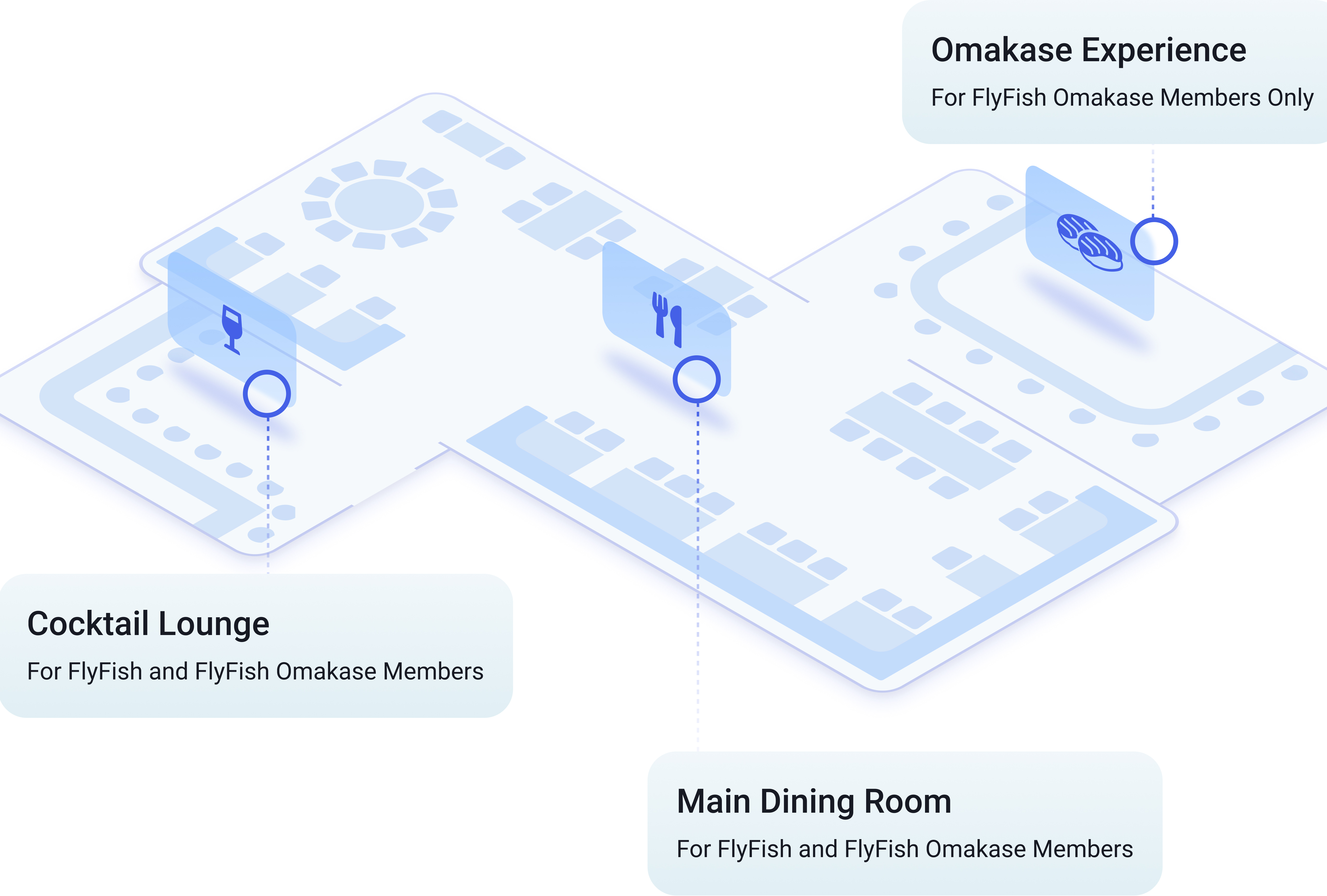 In January, 1,151 Flyfish Club memberships sold out, raising an initial $14 million. The club will open in 2023 in New York.

Wrapped tokens allow for currency exchange or translators between blockchain and another, basically allowing NFTs and crypto tokens from Bitcoin to be able to easily transfer its value to Ethereum or any other blockchain.

The exclusivity of NFTs sold on OpenSea goes hand in hand with the private culture at these clubs, which cater mostly to the 1%. Right now, the NFT marketplace is mostly populated by big spenders within the tech industry who are willing to pay more for both digital and “IRL” experiences. But that won’t always be the case.

“Everybody looked at me like I was crazy when I said by the year 1999 everyone will have a website,” Morfogen said. “I’m predicting now that by the year 2025, every restaurant and every retailer will have NFTs and a metaverse presence. … I’m telling everyone to wake up because hospitality is always late to the tech game.” 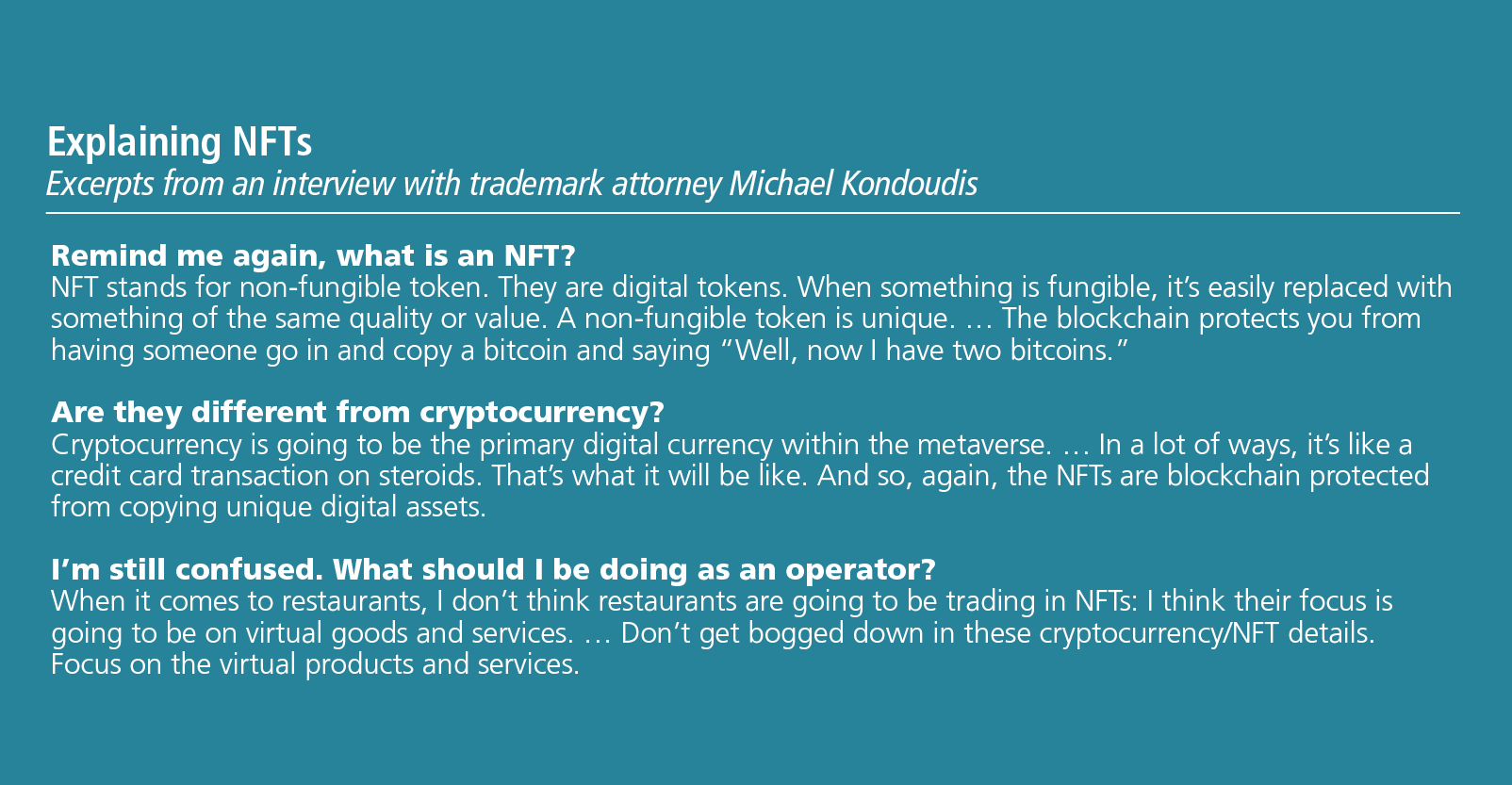 Brooklyn Dumpling Shop is planning a full metaverse experience where customers can peruse a virtual restaurant, buy virtual merchandise and dumplings and have physical items show up at their door. The company is also experimenting with an NFT loyalty program at a more financially attainable level for Brooklyn Dumpling Shop fans; Morfogen said he plans to roll that out by September.

This loyalty program 3.0 would be a one-time purchase of around $4,000, and members get free dumplings every month for five years. Then, because it’s an NFT, collectors can resell the NFT back on Ethereum and Brooklyn Dumpling Shop will get a commission on that resale. The value of that Brooklyn Dumpling NFT on Ethereum is “whatever the market will bear,” he said.

The NFT loyalty program will likely be the gateway for smaller operators (with less wealthy clientele) to enter the world of digital assets. Staffing platform ShiftPixy announced its foray into the world of non-fungible tokens with a new NFT gamified loyalty program, where NFTs are used to play games and earn rewards. The platform is testing out this program with ShiftPixy’s first four in-house restaurant brands, like virtual chicken brand Cluckin’ Lucky, which has its own mascot-turned-NFT, Rombo.

“We wanted to take a forward-thinking approach to customer loyalty and gamify it, not unlike the old tradition of collecting Beanie Babies in McDonald’s Happy Meals,” said Scott Absher, CEO of ShiftPixy. “Loyalty programs have been around forever … but they haven’t really been able to engage customers until mobile technology came along.”

The loyalty program — which does not have a release date yet — will eventually be centered on augmented reality, where users will be able to use their phones to have virtual experiences mixed with reality. Once a user signs up for a ShiftPixy loyalty program, they will be prompted to link their cryptowallet and mint a unique NFT to that particular account.

“We wanted to create this platform so anyone with a digital brand or even a brick-and-mortar brand can allow us to build this digital second floor for their brand so they can better connect with consumers through this immersive experience, and eventually the metaverse,” Absher said.

Eventually, ShiftPixy wants to create a virtual food hall metaverse that can be the center of customers’ virtual dining needs. Absher also envisions linking loyalty points with other companies, much like airline points might link to hotels.

“The idea being that with our NFTs, customers would be able to buy other products and services and actually find a way to monetize [those purchases with the NFT],” he said. “We’re trying to give some dimension and depth to customer loyalty rather than just points so they can bring them to another part of the metaverse.”

For many brands, however, having a substantial NFT program is still a long-term goal. Many brands like McDonald’s, Burger King, Panera Bread and Wingstop are applying for trademark patents so they can protect their brand and, in some cases, eventually sell NFTs within the metaverse. But almost every single one of these brands has remained tight-lipped on plans.

Portland, Ore.-based vegan burger concept Next Level Burger is no different. While the company recently applied for trademarks within the metaverse with plans for getting into NFTs and digital transactions, CEO Matthew de Gruyter declined to go into much detail, other than to say that the brand is looking into both digital and IRL experiences. He does know that the future is almost here, and it won’t just be for the ultra-rich.

Right now, de Gruyter said, the people immersed in NFTs and the metaverse are the very wealthy and the very young. But soon those demographics will expand, he predicted.