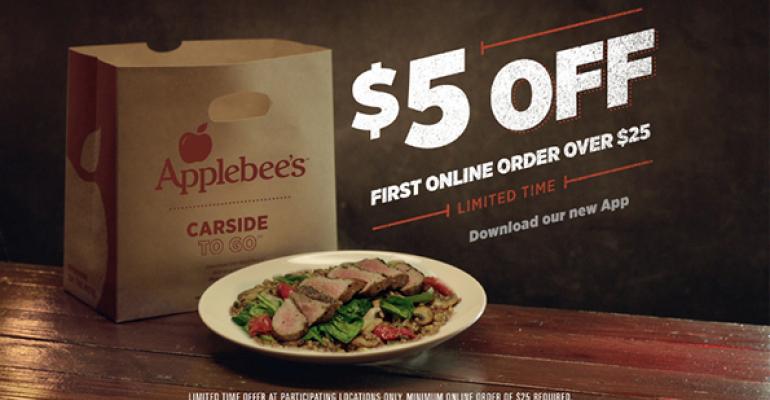 <p><span style="font-size: 12.8px; line-height: 20px;">For a limited time, new users who order via app or website will get a $5 discount off their Applebee&#39;s order.</span></p>
Operations>Technology

Applebee’s Neighborhood Grill & Bar on Monday rolled out a new mobile app that will allow customers to pay ahead, making it faster and easier to order carside-to-go pick up.

Patrick Lenow, vice president, communications and public affairs for Glendale, Calif.-based DineEquity Inc., parent to the Applebee’s brand, said the revised app is the next step in the casual-dining chain’s ongoing focus on consumer-facing technology to improve the restaurant experience.

The previous version of the app “just wasn’t as guest-friendly as it should have been,” Lenow said.

The company said the new app, developed with digital ordering provider Olo, makes ordering easier, faster and safer for users, allowing them to save credit, debit or gift card details within the app for easy payment.

Customers can set up an order days or weeks in advance.

“You could be standing in the line at the grocery store and you know you’re going to Applebee’s on Thursday night, so you can set up your order,” Lenow said. “We took the tool we already had and made if faster and simpler.”

For a limited time, new users who order via app or website will get a $5 discount off their order, the company said.

With the pay-ahead feature in place, the chain has also been marketing its carside-to-go program, which has been in place at Applebee’s restaurants for years.

In the past, customers could pull into designated parking spaces to pick up take-out orders in a hurry, but they had to pay at the restaurant.

With the new app, users can order and pay through the app, and pull into the carside-to-go parking space and either run in to pick up their order faster, or have restaurant staff bring it to the car, Lenow said.

Currently, carside-to-go sales have been in the “solid single digits” systemwide, Lenow said, but the new app is expected to give it a boost.

“From what we’ve seen in tests with the new app, along with the re-emphasis on advertising to remind folks about the convenience, we will see an increase that’s meaningful,” he said.

The new app also sets Applebee’s up for more digital innovation, such as the possibility of adding delivery or the a loyalty program — two features under consideration, though Lenow noted, “We’re not announcing anything today.”

Applebee’s, with its more than 2,000 units, was one of the first casual-dining players to roll out tabletop tablets, allowing customers to order and pay at the table on their own timing.

The new app comes as the chain is pushing for a turnaround after struggling with sinking sales in recent quarters.

Lenow said more tech innovation is coming later this year. “We’re open to anything that makes it easier for our guests,” he said.