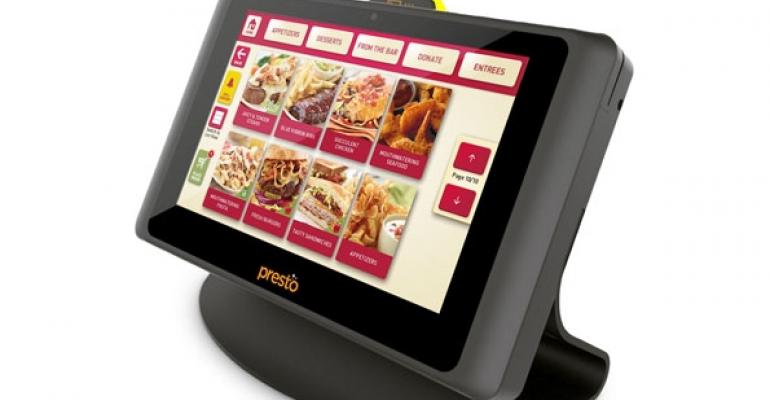 Applebee’s to roll out tablets at all U.S. restaurants

The chain aims to offer guests more control with the touch-screen technology.

Applebee’s Neighborhood Grill & Bar is rolling out the use of touch-screen tablets to its 1,865 U.S. restaurants next year with the goal of putting guests more in control of their dining experience.

The yearlong rollout is scheduled to begin in March 2014 and will include about 100,000 tabletop tablets across the Kansas City, Mo.-based chain’s domestic system.

After testing the technology in about 40 restaurants, the company selected Presto tablets developed by Silicon Valley-based E la Carte Inc. The mostly franchised chain has negotiated a contract for the system rollout through the company’s purchasing co-op but has not disclosed details on cost.

Applebee’s president Mike Archer said the primary goal of the rollout is to eliminate a common “pain point” that can hinder the overall guest experience: finding your server to pay the check. Fundamentally, he said, “It’s about putting more control into guests’ hands.”

He also noted that the company expects the tablets to appeal to Millennials, in particular, who are increasingly comfortable with technology in all aspects of their lives. “It’s about relevancy and how we appeal to a new generation,” said Archer.

Initially, guests will be able to use the tablets to order appetizers and desserts, as well as a second beverage. Servers will still bring menus to the table and take orders for main courses and first beverages.

Archer said some restaurants will test making the full menu available on the tablet, and that could be a next step.

Because the devices will be linked to the restaurant’s point of sale system, guests will be able to use their credit cards to pay at the table whenever they are ready, with a receipt emailed rather than printed out. “The credit card never leaves the guests’ hand,” said Archer.

The goal is not to replace human staffers, but rather to free them to focus more fully on serving the table, he noted. “We see this as a fundamental change in the service model,” said Archer. “But it’s not a labor-saving device. It’s about improving the guest experience.”

The flat-screen tablets sit on a stand at each table and have a 20-hour battery life. Guests can also play games on the tablets, with both free and paid options available.

Perhaps most importantly, the tablets have been “future proofed” with features such as cameras, Bluetooth and mobile capabilities to allow Applebee’s to expand on technological opportunities in future. Down the road, Applebee’s could use the devices as tabletop jukeboxes, for example, or to sell gift cards. Video streaming is also an option, which would allow guests to watch a sports game at the table or enable kids to watch cartoons.

The devices can also collect immediate feedback on the guest experience, allowing the restaurant operator a chance to respond right away if warranted.

Applebee’s franchise operators that have tested the devices say they improve guest experience from both a convenience and speed-of-service standpoint.

“The restaurant is so big and so busy, and the distances are so far, that it really addresses what is often the most common problem for guests: not being able to find their server,” said Flynn, who plans to use the technology in all of his 450 Applebee’s.

The move by Applebee’s comes a few months after casual-dining competitor Chili’s Grill & Bar announced it would roll out Ziosk tabletop tablets to all 823 company-owned locations in the U.S. by mid 2014. Franchisees across Chili’s 1,600-unit system have been given the option using the devices.

The use of touch-screen tablets is catching on across the industry as the technology improves and becomes more affordable, and consumers are increasingly warming to the idea. McDonald’s, for example, is reportedly testing the use of iPads in restaurants, allowing guests to build their burger from a selection of about 20 toppings using the touch-screen menu.

Applebee’s parent DineEquity Inc. is also looking at applying the technology to sister brand IHOP, said Archer, a move that may depend on how it goes for Applebee’s.

Accommodating a restaurant chain as large as Applebee’s is unprecedented, Archer said. “Nobody’s figured out how to scale this kind of thing yet.”