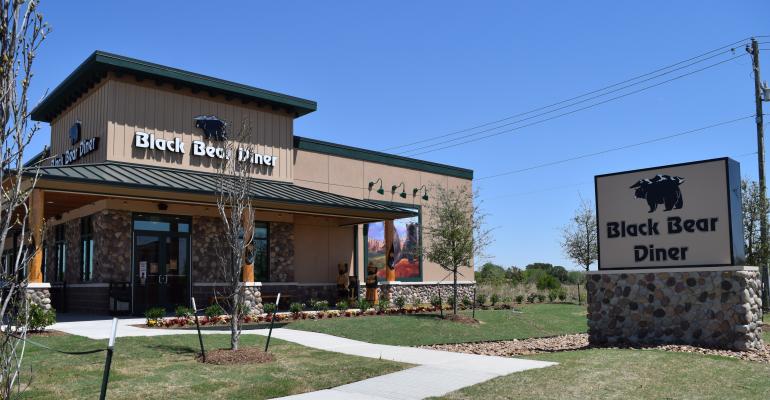 Black Bear Diner, the midscale dining restaurant chain, saw its sales soar in 2021 and its unit growth is expected to be back on track this year, CEO Anita Adams said.

Adams said the sales rebound — with off-premises sales in takeout and delivery growing to 20% now, up from about 7% of sales pre-pandemic — had invigorated franchisee partners.

“We are very excited to be back on the growth track,” Adams said. “This year we will open about 13 new Black Bear Diners. … Five of those are corporate and then the remaining are franchised.”

She said investments in technology around delivery in 2018 paid off during the coronavirus restrictions, which allowed the brand to quickly pivot when the pandemic was declared in March 2020.

This year has produced supply-chain shortages, but Adams said operators are “battling through it.”

Margin pressures exist, she said, “but we believe we want to provide our guests what they love about Black Bear, so we haven't really pulled back significantly on the menu. And we're just continuing to take price where we feel we can take it — not being too aggressive.”

Corporate growth is focused on Texas, Adams said; the brand opened its first franchise there in Houston in 2018. The company’s first corporate diner in Texas will open in the Alliance development north of Fort Worth this summer, she said, and there are plans for six in the state this year.

“On the franchise front,” Adams added, “we've got a lot of our current franchisees investing in their current geographies, but we are in discussion with a couple of new partners, and that's where I think we're also excited.”

Black Bear Diner has in the past been known for using second-generation restaurant sites.

“We still like that model,” Adams said, “but I'll tell you it's been difficult.” While many observers thought the pandemic would shift real estate muscle to the tenant, she said that hasn’t proven out.

“Most of the units that will open this year are actually new builds,” she said, which allows for new equipment and Black Bear-specific design for costs similar to conversions.

“Another thing we learned coming out of the pandemic,” Adams added, “is we threw up what we called parking lot patios. They were very rudimentary, but the folks love to dine outside. We've actually gone back around, and we put in 20 permanent patios in existing Black Bears, and that is part of our prototypical design.”

Black Bear’s prototypical design has also been trimmed in square footage, yielding about 5,200 square feet, she said. The last prototype was about 5,600 square feet, and the space has been trimmed out of both the front and back of the house, Adams said.

Black Bear today has 147 diners, and Adams said “there’s a lot of white space out there for us.” The cabin décor and carved bears can be transported nationwide, she added.

Black Bear is also testing handheld ordering devices for waitstaff, Adams said. “As AUVs have gone up, we’re looking at ways we can increase our flow-through,” she said.

“We are cashier-based banking,” she added, “so you pay at the counter when you leave.” Lobbies can get crowded.

“We've designed a window where you walk into our foyer and there's an open window there,” Adams said. “So folks who are just picking up frankly don't even have to step into the lobby. We're seeing good success with that.” The brand has also made some modifications to the kitchen to speed up off-premises orders.

Black Bear Diner was founded in 1995 in Mount Shasta, Calif., by Bruce Dean and Bob Manley. The family-dining concept is open for breakfast, lunch and dinner.