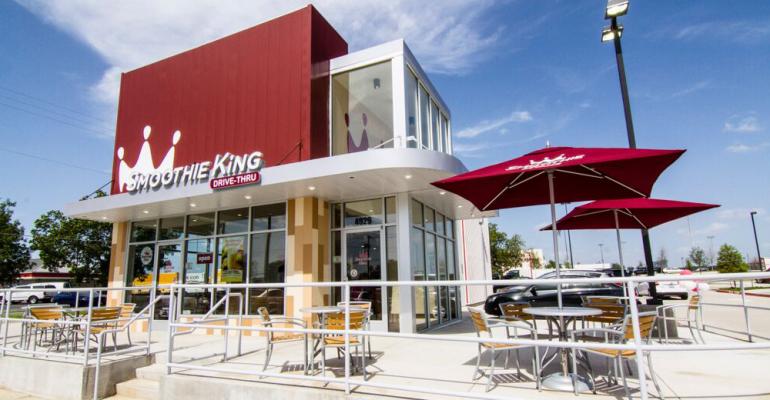 Once dominated by brands serving up affordable, sweet indulgences, the Second 100 Beverage-Snack segment continues to grow strongly due to the success of brands offering premium products — including those often perceived as better-for-you — that consumers can customize.

Leading the segment’s growth was New Orleans-based Smoothie King, which grew sales 21.4 percent in the Latest Year, more than any other chain in the segment. Packing a powerful one-two punch, Smoothie King grew those sales through a combination of 12.8-percent unit growth of and 8.2-percent ESPU growth.

Among the choices helping to boost Smoothie King’s impressive growth is the continued addition of innovative “smoothies with a purpose.”

For example, last summer, the chain introduced a line of coconut-water-based flavored smoothies focused on hydration. King said the chain will re-offer the flavored products again starting this month, but with a stronger focus on their purpose — to hydrate.

The chain also recently launched a line of Coffee High Protein Smoothies made with cold brew coffee and packed with 30 grams or more of protein that are targeted at customers simultaneously seeking energy and a caffeine fix. “It’s resonating with existing customers, and I think it’s bringing in some new customers, too,” King said.

The chain will continue to expand, he said, this year adding a total of 110 new domestic stores — the most stores it’s ever opened in the U.S. in a single year — including many with drive-thrus and a number of others that will be new freestanding stores.

Menchie’s Frozen Yogurt, which rapidly ascended to the Second 100 a few years back through aggressive franchise growth, and then fell off the list last year, has returned to the Second 100, posting the third-highest sales growth of the group, at 11.6-percent in the Latest Year. The chain continued to focus on unit expansion, growing units by 6.1 percent in the Latest Year, on top of 22.7-percent Preceding-Year growth.

After several years of challenges, Minneapolis-based Caribou Coffee appears to have righted itself. In the Latest Year the coffee chain was positive on all fronts, growing sales by 7.5 percent, units by 5.3 percent and ESPU by 2.9 percent.

One possible contributor to the chain’s return to growth is that it has been teaming with sister brand Einstein Bros. Bagels to create Coffee and Bagels stores, a new brand built around customizable coffee and bagels.