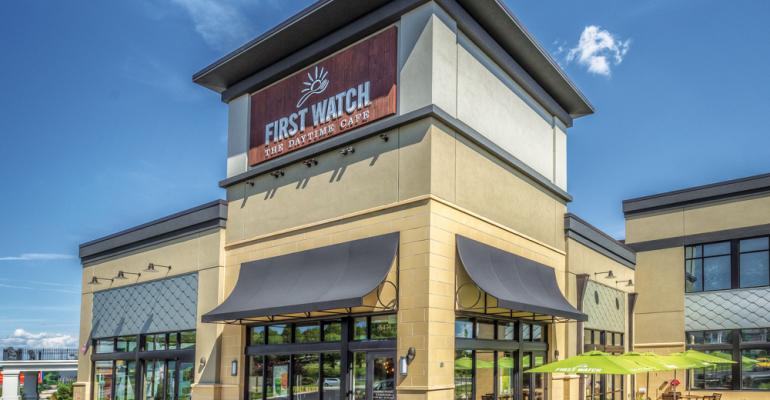 Upstarts like Shake Shack, Blaze Pizza and First Watch make a mark on the Second 100

Despite a host of challenges in 2016, mid-sized restaurant chains still grew in the Latest Year, according to the Nation’s Restaurant News proprietary Second 100 ranking.

The chains, the 101st through 200th largest chains in the country based on domestic system sales, generated $26.3 billion in sales in the Latest Year, growing 3.5 percent from the Preceding Year, according to NRN research.

The results kept up with the companies’ larger cousins in the Top 100, whose sales grew 3.6 percent.

“Overall, Second 100 chains have done a reasonably good job of keeping pace with their much larger Top 100 peers in recent years,” said Alan Liddle, data and event content director for Nation’s Restaurant News, and manager of the Second 100 ranking.

But growth on the Second 100 was not evenly spread. The ranking is a mix of growth chains adding locations and same-store sales, and companies on the downside of their life cycles. The strong performance by growth concepts more than offset the weak performance of struggling concepts on the Second 100.

Collectively, the Second 100 increased system sales by nearly $900 million, and more than two-thirds of the growth came from just 10 chains. One of those chains was First Watch, which provided an impressive combination of unit growth and growth in sales per unit.

The Bradenton, Fla.-based Family-Dining chain, which specializes in breakfast and lunch, added 57 locations, giving it 197 units, while system sales increased 43 percent, to $231.6 million. Estimated Sales Per Unit increased almost 13 percent, to nearly $1.4 million per location — not bad, considering that its restaurants close at 2:30 p.m.

“We had a great year,” said Chris Tomasso, president of First Watch. “We focus on customer count. We’re not making positive sales through price increases or mix shift. We’ve had positive traffic for 17 straight quarters.”

First Watch was one of a handful of Second 100 chains that surged. Nine chains on the ranking reported system sales growth of at least 20 percent in the Latest Year.

That included Blaze Fast-Fire’d Pizza, which has grown nearly five-fold in the past two years, from $33 million to $183.7 million in the Latest Year. That was the fastest growth rate on the list.

Just behind Blaze Pizza was Shake Shack, whose system sales increased nearly 44 percent, to $277.3 million, from $193.2 million the Preceding Year. The burger chain’s sales have more than doubled from the Prior Year, when it had $120.5 million.

Another rapidly growing chain was Freddy’s Frozen Custard & Steakburgers, whose system sales have increased nearly 70 percent in the past two years, to $340.5 million.

Cooper’s Hawk Winery & Restaurants, like First Watch, is a full-service concept, which is not unusual for this ranking. Full-service concepts represented nearly half of the chains on the Second 100, including 39 Casual-Dining chains. That’s in direct contrast to the Top 100, which is dominated by Limited-Service chains.

As such, Estimated Sales Per Unit for chains in the Second 100, on average, increased 0.4 percent in the Latest Year, slower than the 0.9-percent average increase of the Top 100.

“Top 100 chains appeared to use their marketing might and deeper pockets for traffic-sustaining discounts in the latest year to the detriment of the second-tier players,” Liddle said.

“Table-service concepts generally experienced lower growth or erosion in same-store sales beginning in the second half of 2016 and continuing at least into the first quarter of 2017, compared with the year before.”

The Second 100 also included a number of concepts on the downside of their growth cycles, which likewise influenced the performance of chains on the ranking. Consider that 15 chains saw declines in system sales of more than $10 million in the Latest Year, and 10 of them were full-service concepts.

That included Famous Dave’s, whose estimated U.S. system sales declined by $58.4 million, or 12 percent, to $422 million in the Latest Year. The Minneapolis-based barbecue chain has struggled with management changes, closed locations and rapidly falling same-store sales.

Not every struggling chain was in Casual Dining. The biggest decline in this ranking, by far, came from Quiznos. Once a 5,000-unit chain with a legitimate shot at overtaking Subway, the Denver-based sandwich chain now has fewer than 500 U.S. locations. Estimated U.S. system sales declined by 25 percent in the Latest Year, and 24 percent in the Preceding Year. Quiznos’ system sales are now $195.2 million, a drop of 43 percent from the Prior Year.

Still, the weak performance among full-service chains on this ranking makes the performance of concepts like Coopers Hawk and First Watch all the more impressive. These chains are proving that customers will spend the time to dine out at chains with wait staff.

“We’re creating something special,” Tim McEnery, founder and CEO of the Chicago-based Cooper’s Hawk, said in an interview earlier this year. “We’re creating special experiences for people who will never be able to go to Napa.”

“We do fly under the radar,” Tomasso said. “We do a little bit with the consumer, too. Our brand recognition is only at 33 percent. It’s super encouraging when you think that a Panera is at 97 percent. There are two types of people in the world: Those who know us and love us, and those who haven’t heard of us yet.”