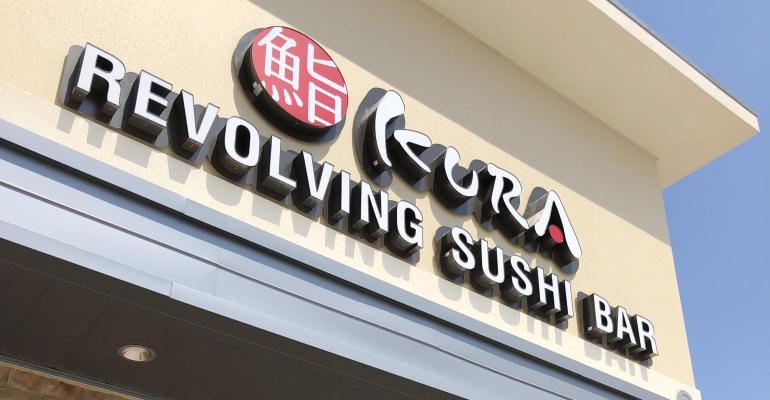 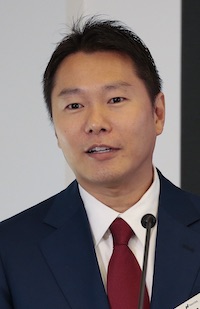 Irvine, Calif.-based Kura Sushi USA, a division of the conveyor-belt “revolving sushi” company based in Japan, on Thursday opened trading with an offer of 2.9 million shares at $14, raising more than $40 million. At market close Thursday, the stock price had risen more than $5.60, or 40%, to over $19.60 a share.

Proceeds from the IPO will go toward unit growth and paying down debt, said Hajime “Jimmy” Uba (above), CEO of Kura Sushi USA, in an interview Thursday from the Nasdaq offices.

Kura Sushi USA, which opened its first U.S. restaurant in 2009, uses technology developed for the Japan-based parent brand, which has more than 400 restaurants. The first restaurant opened in Japan in 1984.

With the opening of the U.S. division’s 21stunit in Sacramento, Calif., Kura Sushi introduced what Uba called “a modern Japanese aesthetic” with cleaner lines and colors. Units will adapt the new look going forward, he added.

Units range from 1,600 to 5,600 square feet or larger and can fit into both inline and endcap locations at strip malls and shopping centers, the company said.

“Given that we have a very wide square footage range, there is significant variability in employees needed,” Uba said through a translator. Generally, Kura Sushi units in the U.S. have five to 10 people to staff the front of the house at peak times and eight to 16 in the back of the house.

Sushi concepts generally have labor costs in the high 30% to low 40% range, Uba noted, but Kura Sushi maintains labor costs as a percentage of sales to 31%.

“The operational expertise we’ve developed through our 35-year brand history,” he said, “has allowed us to make significant cost savings in labor which we reinvest into our food.”

Uba also said the company has updated its menu, which it does twice a year, to offer new dishes and variety, including limited time offers.

Smaller public offerings in the past two years included one in October 2017, when Los Angeles-based Fat Brands Inc., parent to the Fatburger, Ponderosa, Bonanza and Buffalo’s Café brands, completed a $24 million Regulation A+ offering, or so-called mini-IPO.

Kura Sushi USA has 22 units in the U.S., including 12 in California, seven in Texas and one each in Georgia, Illinois and Nevada.