This is part of Nation’s Restaurant News' special coverage of the 2019 MUFSO conference, taking place Oct. 14-16 at the Sheraton Denver Downtown. Follow coverage of the event on NRN.com and tweet with us using #MUFSO. Stay connected on the go by downloading the MUFSO app.

If you want your menu items to stand out to your customers, use “fusebiquity,” Jack Li, founder of menu research firm Datassential, told MUFSO attendees.

That’s taking little-known flavors from around the world and infusing them into foods that are ubiquitous on the American foodservice landscape. An example, introduced in 2016 at Wendy’s, featured fries topped with ubiquitous things like cheddar cheese and jalapeños, but finished with little-known ghost pepper sauce.

Li said that, with a growing number of consumers eager to try new things — particularly younger consumers — ingredients that are just being introduced at avant-garde restaurants, or that are still largely confined to ethnic neighborhoods, can gain traction for more mainstream operators.

Related: More than just burgers or chicken: Other plant-based protein categories on the rise 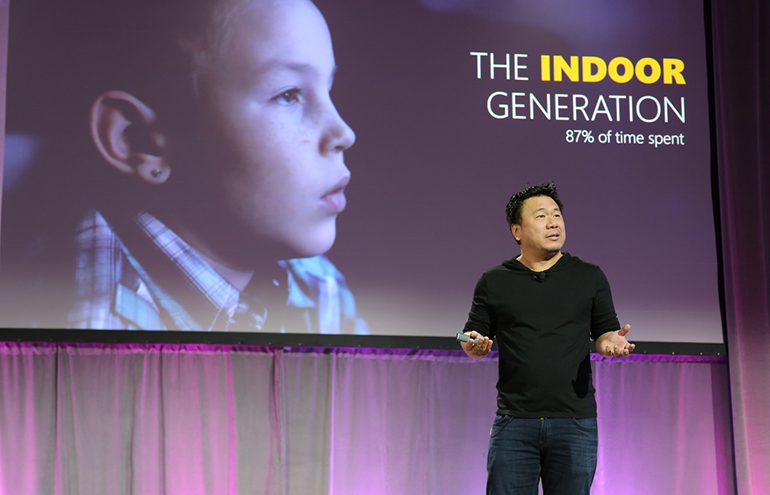 “You can now look at those things in the early first stage [of introduction to American menus] and incorporate them in your menu if you do it the right way,” he said.

Other examples include Carbonara Benedict, kung pao monkfish or citrus adobo pizza. By introducing those new elements to foods that consumers are already familiar with, you can overcome hurdles that often come when trying new flavors.

Another example is the winner of the limited-time-offer contest from the Menu Insights & Innovation workshop held before MUFSO, at which participants conceptualized new menu items that were then scored overnight using Datassential’s analytical process that measures factors such as uniqueness and purchase intent. It was a “Fried Fish Biscuit Sldier” with the following description: “Light and crispy wild-caught Cape hake fillets smothered in avocado mayo sitting top our smokehouse bacon settled between our southern honey biscuit.”

It also can help you gain cachet with younger customers, such as those in “Generation Z,” born after 1995, who crave unique experiences and new things just for newness’s sake — for bragging rights on social media if nothing else.

That’s in contrast to members of Generation X, born between 1965 and 1980, who tend to crave premium products and experiences, or Millennials who (born 1980-95) who seek authentic and/or artisanal.

He said the desire for young people to broadcast their uniqueness has helped spur the growing trend of new-wave Asian desserts such as rolled ice cream, bubble waffles that are stacked in a cone with ice cream, and sesame rice balls — all of which are very photogenic.

“A lot of the appeal of these Asian sweet things is that they’re utterly instagrammable,” Li said.

Now that food is increasingly a part of a person’s individual identity and public persona, Li said that the four major drivers for food choices — taste, convenience, affordability and familiarity — have been joined by a fifth one: Personal values.

That, he said, is why the same people who gravitate toward natural, organic and GMO-free items are also drawn toward lab-made food, including plant-based proteins today and — in the not too distant future — lab-grown meat and dairy.

“These products exist today,” he said: Ice cream made from lab-grown milk is already coming on to the market. And cultured chicken — made from cells extracted from live chickens and grown in labs, thus making it unnecessary to slaughter the animals — was introduced for its first public tasting at Datassential’s recent Foodscapes conference.

“It doesn’t just taste like chicken. It is chicken,” he said.

Although lab-grown meat seems to fly in the face of the broad consumer shift toward whole, natural food, Li said all of them address a growing number of people’s interest in safeguarding the environment in general, and helping to prevent global warming in particular.

“This is a values-based proposition,” Li said, adding that it’s a shift away from personal focus in diet choices and toward the broader social good.

He said that many Americans are looking to cut down on their red meat intake, and that the top three reasons for that all are related to personal health. Those interested in “cellular agriculture,” such as cultured chicken, say the top reasons they’re interested is to help reduce global hunger and food contamination and to improve animal welfare.

Li said that as global warming is becoming increasingly prevalent in social consciousness, and “we are certain that is going to be much more a part of the food conversations.”

He provided a link for more trend data at www.snap.pro/mufso.