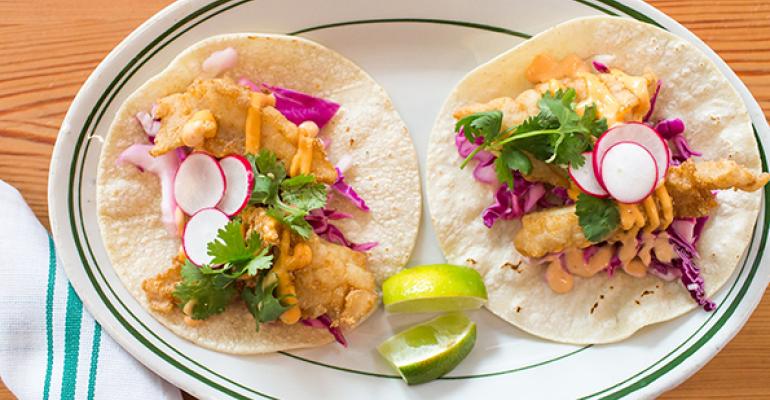 Growing up in Victoria, Texas, Richard Chamberlain used to love to go to Luby’s cafeteria and get cod crusted in corn flakes.

“It was mild, crunchy and you put tartar sauce on it with lemon,” Chamberlain fondly recalls.

Chef Chamberlain still enjoys fried cod now and again, but at his Chamberlain’s Fish Market Grill and Chamberlain’s Steak and Chop House in Addison, Texas, just outside of Dallas, he prefers to serve lighter preparations that let the mild, white fish shine.

“Our favorite fish to feature in our daily specials is Alaskan cod,” Chamberlain said. “With a naturally mild flavor, Alaskan cod is perfect for marinating.”

Sometimes Chamberlain indulges Southerners’ craving for fried fish by crusting cod on one side with a mixture of panko and either pecans, almonds or pistachios in a preparation he likes to call “fried light.”

Cod is growing quickly on menus, according to the latest research from Technomic Inc.’s MenuMonitor. The firm white fish now appears on 31 percent more menus than just five years ago. Cod is still most frequently prepared fried at restaurants, but baked, grilled and broiled are also among the top preparations.

Like Chamberlain, many chefs are putting cod on the menu, as well other similar fish, such as pollock, haddock and whitefish.

At Indaco, a rustic Italian restaurant in Charleston, S.C., executive chef Michael Perez prepares a baccala, or salt cod, dip that can be served several ways depending on the season. When squash blossoms are available, Perez stuffs the baccala, made with a purée of salt cod, milk and potatoes, inside the blossoms and then deep-fries them. Other times he tops the baccala with a gremolata made of breadcrumbs, herbs and lemon zest, bakes it in a wood-fired oven and then serves it with grilled house-made focaccia.

At Greenpoint Fish & Lobster Company in, Brooklyn, N.Y., chef Adam Geringer-Dunn likes to use Atlantic pollock — a fish unrelated to the Alaska pollock of the Pacific — in place of cod in his Baja Grilled Fish Tacos, which also have citrus cabbage and chipotle-lime mayonnaise, radishes and cilantro on grilled corn tortillas. Geringer-Dunn said pollock makes a good substitute because its firm, white flesh and delicate flavor are so similar, and he is able to source it from a “well-managed fishery.” Pollock is also significantly less expensive than cod.

Also using a cod-like fish in tacos is chef David Groll, director of menu development and corporate chef at Beef ‘O’ Brady’s and the Brass Tap, based in in Tampa, Fla. Groll uses haddock, which is closely related to cod, for his traditional fried fish tacos at the Brass Tap. They are topped with shredded cabbage, tomatoes, onion and a poblano pepper sauce on a flour tortilla. He says prefers the haddock because it's a flakey and delicious fish that handles well, and, from a portion standpoint, is a perfect fit.

In the last year, freshwater whitefish, the high-fat, mild flavored fish found in lakes and streams throughout North America, has also been showing up on more menus, including those of several Midwest chefs who are serving local whitefish for its great taste and value.

“I grew up on whitefish,” Kornick said. “I love being able to serve the lobster alongside the whitefish because it’s a great contrast to showcase our own Midwest fish alongside something from the coast and showcase how delicious they are.”

“We strive to use primarily local ingredients, so this whitefish is straight from Wisconsin, and I love being able to highlight Midwestern fish,” Miller said. “Secondly, it’s not terribly expensive and it’s delicious, so I find that it’s a great value.”

Correction: July 28, 2015 An earlier version of this article had the incorrect first name for the director of menu development and corporate chef at Beef ‘O’ Brady’s.