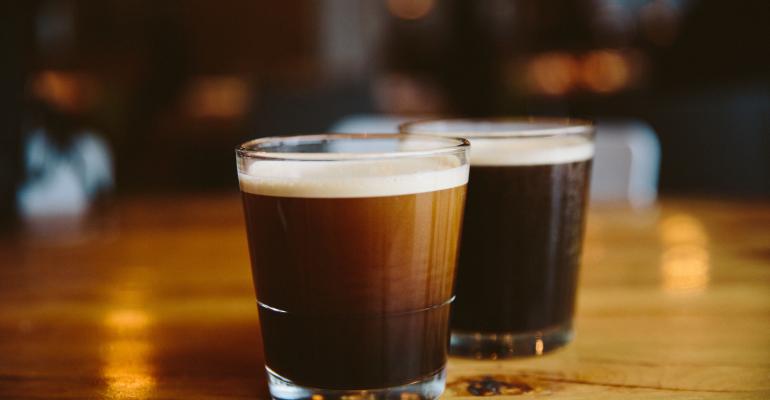 As temperatures cool down, operators turn up the creative heat on tempting coffee beverages that combine such tantalizing ingredients as exotic fruit syrups, bold, spicy flavorings, fresh herbs and non-sugar sweeteners. Consumers are all-in, and experimentation is the order du jour.

“Salted caramel and cookie butter are gaining traction as consumers look to sweet and savory flavors,” says David Commer, president of Commer Beverage Consulting. “Combination flavors such as s’mores are also popular. Pumpkin and peppermint obviously come to mind during this time of year. Chocolate is always a favorite, particularly when paired with another flavor like peppermint. Cinnamon, hazelnut, vanilla and caramel are as popular as ever.”

Among coffee drinkers in the United States the average consumption is 3.1 cups per day, according to the National Coffee Association. Specialty coffee sales are increasing by 20 percent annually and account for nearly 8 percent of the $18 billion U.S. market.

PJ's marketing and operations team work together to establish what flavors are trending and what products will be attractive to customers, says Reid Nolte, director of marketing at PJ’s Coffee of New Orleans, with more than 90 locations. “We look at what flavor profiles guests are aware of, which ones are emerging and what flavors we can be the first to market.

“We strive to encompass the flavors of New Orleans in our beverages. We also try to think of flavors that specific regions have yet to capitalize on by collaborating with our vendors.”

“This is the time of the year when people like to have something cooler and more refreshing as opposed to winter when things get a bit more seasonal here,” says Luigi Di Ruocco, founder and co-owner of Coffee Bar.

Di Ruocco says it pays to know your clientele. “Our history shows that males tend to go with bolder flavors like drip coffee, espresso and cappuccino. Females go with the more refreshing drinks such as iced lattes and vanilla latte. I’d say the young millennial guests — especially women — are more willing to try the specials.”

At Café Lucia, a neighborhood cafe in Atlanta, guests can savor a variety of flavor-rich coffee beverages. Offerings such as lavender latte, honeybee latte and strawberry shortcake latte are made with local ingredients.

“Our latest have been designed by our baristas. They had some great ideas and ordered ingredients to craft their own drink specialties,” says owner David Jackson.

Once a beverage is added to the menu, it stays. “I serve all drinks year-round. Once we have created a drink that patrons want to have long-term, the last thing I want to do is to take it away from them,” he says.

“The tarragon-anise is a beautifully aromatic flavor combination that balances the bitterness of the espresso and oat milk, which is a ‘life-changing’ milk alternative made of oats. When steamed, the oat milk takes on a delicious, creamy texture,” says Nicole Beall, café manager.

Other popular specialty coffee beverages include Vanilla Mint, Mexican Mocha, Lavender Honey and Lavender. “Our lavender, tarragon-anise and hazelnut syrups are the most popular flavors, especially if they're made with almond milk,” says Beall.

Mercantile and Mash, a gourmet food emporium in the historic Cigar Factory in Charleston, S.C., also strives to give guests what they want, when they want it.

“People are interested in hot, aromatic beverages when it's cold outside,” says Michael Mai, coffee manager. “The best thing you can do is to make things from scratch so your aromatics are really popping.”

Mai has been tasked with specialty drinks for special occasions such as creating s’more lattes for a Halloween brunch. “I wanted to make it delicious and also have an interactive element. I smoked chocolate syrup to impart a campfire-like aroma and flavor. The milk was steeped in graham crackers. These two elements combined with a velvety and chocolaty espresso made a delicious drink. The interactive part of the drink was fun for people. We floated rum on top of the beverage and lit it on fire with a torch so customers could toast a marshmallow in their latte.”

Bold and tempting beverages such as White Lightning with jalapeño spice and cayenne pepper, Honey Cinnamon Latte, Espresso Hot Chocolate, Pumpkin Cream Nitro and Iced Banana Joe with hemp seed, banana puree and dates are among the offerings at Chicago-based Lettuce Entertain You Enterprises’ Beatrix, a restaurant and coffee house.

“We work closely with our mixologists and chef team and gain inspiration from our food and drink travels,” says Marc Jacobs, LEYE’s executive partner and divisional president.

Restaurants do best when the beverage menu works well with the food offerings. The Pitaya Latte at Vitality Bowls, the San Ramon, Calif.-based superfood café with more than 50 units, is a case in point. The drink is a blend of pitaya with organic espresso, coconut milk and organic coconut sugar.

“We knew we wanted to come up with a superfood coffee menu to coincide with our existing offerings. We started testing a variety of superfoods infused with organic espresso and came up with the Pitaya Latte,” says Uriah Blum, vice president of operations.

Today’s coffee beverages are a far cry from yesterday’s basic offerings. With such creativity it’s anybody’s guess what tomorrow will bring. “The sky is the limit,” says Commer.” I think marketers’ and operators’ pursuit of the next new thing is endless.”