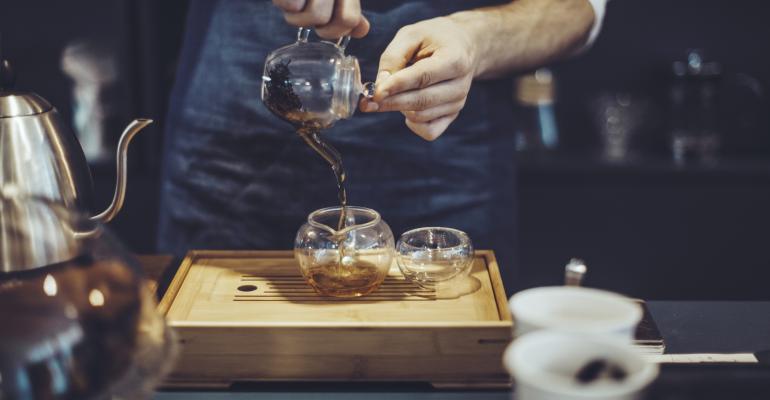 Soda sales are on the wane as consumers turn away from conventional choices and gravitate toward cold drinks that they consider better for them. The latest “What’s Hot” culinary forecast from the National Restaurant Association spells it out: Among the top five trending non-alcoholic beverages are house-made/artisan soft drinks, gourmet lemonade, specialty iced tea and cold brew coffee.

Mocktails nudge house-made sodas into a more upscale class, although sometimes they are so labor intensive that they can probably justify prices approaching the real thing.

Vernick Food & Drink in Philadelphia pours a seasonally changing menu of refreshing and sophisticated alcohol-free drinks made to order for $6. Past choices have included the Fresh Ginger and Lime (ginger syrup, fresh lime juice, sparkling water) and the Cucumber Smash (muddled lemon and mint with cucumber water and sugar).

Core Life Eatery serves a basic classic lemonade made with white cane sugar, fresh strained lemon juice and filtered water. It seems ho-hum next to the other colorful handcrafted flavors which start with the basic mix and add in beets, blueberry-mint, cranberry-cayenne and cucumber-basil.

When it comes to cool coffee drinks, cold brew and nitro coffee are turning up everywhere. Cold brew, valued for its smooth taste and lower acidity, has been hot for the last several years and has found a place on coffee chains’ menus and in grocers’ coolers. Undiluted, it provides a flavor-forward base for any number of creations.

The Federal in Atlanta’s Midtown district stirred up interest in June with a $3 special on shaken cold brew beverages. Choices include Café Sua Da, cold brew with sweetened condensed milk; The Wilson, with coconut milk, palm sugar and lime; and Café Cielo, with sorghum cinnamon and vanilla.

Nitro coffee — made by infusing cold brew with nitrogen, which creates a sweeter, rich, effervescent character and foamy head — has earned fans who like the caffeine kick and the taste, which some say reminds them of stout. Nitro coffee is more of a purist’s brew, something that doesn’t need to be dressed up to sell.

Tea, at least in the United States, means iced tea. According to the Tea Association of the USA, 85 percent of tea consumed in this country is iced. At restaurants, that figure runs even higher.

Panera Bread recently introduced a menu of non-carbonated teas and soft drinks that covers all the bases for patrons seeking soda alternatives across the sweetness spectrum.

“We believe people deserve to know exactly what’s in their drink so they can make the best choice for their lifestyle,” says Panera Director of Wellness Sara Burnett. “We know more and more guests are looking to reduce their added sugar consumption.”

With consumer interest rising in teas as a soda alternative, specialty teas have gotten more attention. The popularity of cold brew and nitro coffee, for example, has inspired similar treatments for tea. As with coffee, cold steeping techniques tend to yield a less-bitter result, and the prolonged steeping allows different flavors to be extracted from the leaves.

Alfred Tea Room in Los Angeles is at the forefront of the nitro tea trend. Chai tea bought in kegs is infused with nitrogen as it’s dispensed. Similar to coffee, the nitrogen results in a foamy, slightly effervescent drink with a crema-like head.