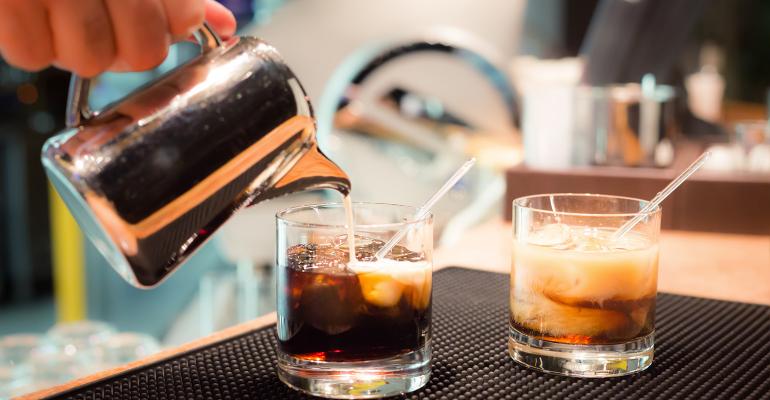 Remember when coffee was mainly a morning eye-opener served hot? In the cold brew wave, it’s a breakfast and brunch beverage, a mid-morning refresher, a lunch companion, an afternoon energy drink, a snack-time treat and a mixer at cocktail hour.

Cold brew, nitro, iced coffee, frozen blended coffee and other chilled java spinoffs are boosting traffic and sales all day long in coffee shops, family dining operations, chef-driven restaurants and casino hotels. Much of the appeal is a smoother taste with less of the acidity that hot water extracts from coffee beans.

Since the 1980s, long before it was trendy, PJ’s Coffee of New Orleans had been brewing toddy-style cold brew concentrate daily in each of its stores, which now total more than 90.

“Not only is it a signature product, it also accounts for the vast majority of daily coffee sales,” says Felton M. Jones Jr., roastmaster of the New Orleans-based chain. In its simplest form, the concentrate is mixed with water in a 1:1 ratio and enjoyed as PJ’s Original Cold Brew Iced Coffee. It is also combined with ice in granitas and mixed into specialty drinks such as the Honey Macadamia Nut Iced Latte and White Chocolate Lavender Latte.

Many other operators are leveraging it as well. At Peet’s Coffee, based in Emeryville, Calif., switching to cold brew from iced-down hot coffee in 2015 sparked double-digit sales growth. Cold brew has become one of the company’s highest performing product lines.

It’s a cold world
Iced/frozen blended coffee had a two-year compound annual growth rate of 12.6 percent in dollars and 8.9 percent in volume from 2014-2016, according to the 2017 Technomic Away-From-Home Beverage Study.

In terms of consumption, cold brew surpassed hot coffee, iced coffee and frozen coffee at breakfast in the Technomic study. It competed well with those items in the a.m. snack and lunch dayparts as well. But it was far behind iced and frozen coffee in consumption in the p.m. snack and dinner dayparts. That suggests that operators who make their own cold brew sell lots of it early, but may run out before the day is over.

Mixing it up in Portland
At Red Star Tavern, a Kimpton restaurant in Portland, Ore., cold brew is a key ingredient in The Cold Awakening, a signature cocktail made with bourbon, a vermouth-like aperitif wine, salted maple syrup and a float of unsweetened cream. “People who order it are looking for that coffee kick,” says head bartender Brandon Lockman. “I think they love it.”

What happens in Vegas
Cold brew shines with dark rum in tiki-style drinks and sherry-laced coffee cobblers over ice, reports Andrew Pollard, assistant director of beverage development at Wynn Las Vegas. “Coffee adds the unique dynamic of so many different styles and flavor profiles and a distinct texture and bitterness,” he says.

Cooling it in Colorado
“Over the last few years, we’ve seen cold brew become an anytime, any-season beverage,” says Brandon Wise, vice president of beverage operations for Sage Restaurant Group, based in Denver. “Before, it was more of a hot-day order.”

Sage’s Emporium Kitchen and Wine Market in Fort Collins, Colo., incorporates a specialty coffee brand in partnership with a local coffee roaster. Its cold brew can jazz up many cocktails — anything from an espresso martini to a White Russian, Wise says.

Greeting the season
Summer will soon be here, bringing peak demand for refreshing beverages. Operators would be wise to promote cold brew coffee, a proven traffic and sales booster with all-day appeal.