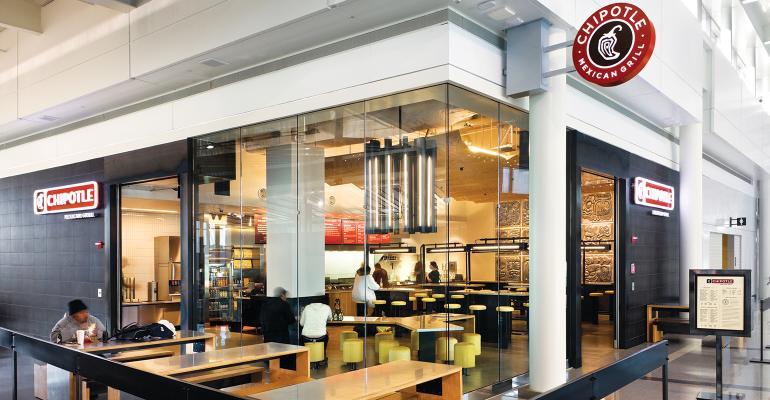 Chipotle CEO Brian Niccol hints at drive-thrus in the future

Digital access, innovation and visibility are crucial to the brand’s recovery

In the long term, the quick-service veteran — snatched from Millennial-friendly Taco Bell — said he wouldn’t rule out the idea of selling foil-wrapped burritos from drive-thru lanes.

“Drive-thrus, I think, are an interesting proposition for Chipotle,” Niccol told investors during a conference call on Wednesday.

Drive-thrus can help increase access to Chipotle, he said. But for now, it’s more of a “longer-term, access-innovation play.”

In the near term, Niccol stressed the company’s razor-sharp focus on increasing access to the brand through in-store kiosks, mobile ordering, delivery and catering. With the help of newly tapped CMO Chris Brandt, Niccol said it is vital to bring the “narrative back” by reminding fans why they love Chipotle.

“There is tremendous opportunity of educating people on why they should feel good about the brand,” he said.

Niccol is tasked with reviving a company whose reputation remains tarnished after a series of foodborne illness outbreaks in late 2015. The food-safety scares, which sickened dozens of customers in multiple states, caused sales to plummet, and the company remains in recovery mode.

But, “where that recovery takes us, I think, is also really exciting, but that's a much longer-term discussion,” Niccol said.

Niccol, who served as CEO of Taco Bell for three years, started at Chipotle on March 5. In his opening remarks, he said he was excited to take charge of the company built by Steve Ells and admired by legions of customers around the country.

He spent the first few weeks observing restaurant operations and listening to consumer feedback, he said. Among the top complaints was access.

“The brand is not that convenient,” he said.

Throughout the call, gushing industry analysts congratulated Niccol on his appointment as they peppered him with questions about his impact on the chain. Unsurprisingly, Niccol borrowed key phrases he used during his tenure at Taco Bell, describing Chipotle as a culture-leading brand with craveable food.

“It's important to me that we create a culture that is focused on running and supporting great restaurants, putting the customer first, living our purpose, innovating for today and tomorrow, and supporting and recognizing each other,” he said.

Similar to Taco Bell’s menu experiments, Niccol said he wants Chipotle to pilot new products more thoroughly before they are rolled out nationally. He did not provide details about new menu items.

“There's a lot of great work underway, and we are starting to get some traction,” he said.
During the first quarter ended March 31, Chipotle’s sales increased 7.4 percent, to $1.1 billion. The company reported a profit of $59.4 million, an increase from $46.1 million the previous year.

Although restaurants saw fewer transactions, the Denver-based chain said same-store sales rose 2.2 percent during the first quarter. A large chunk of that increase was driven by a 5-percent average price increase across the menu last year. Average check was also boosted by customers adding a new queso side item to their orders.