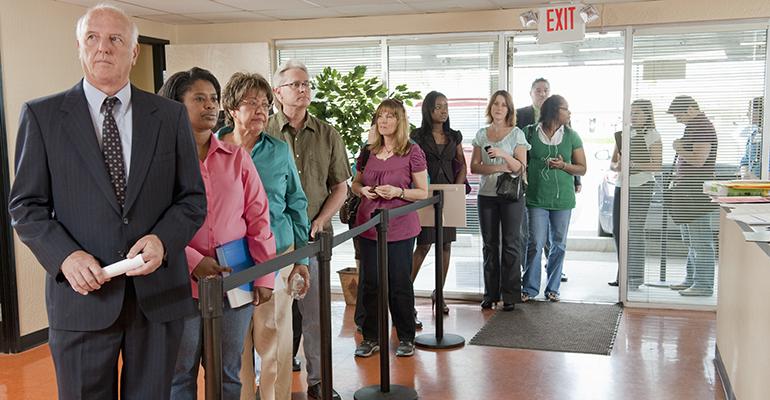 While some job cuts may be temporary, the NRA estimates 3% of restaurants have closed permanently so far in March

In an indication of the coronavirus toll to come, the number of jobless claims jumped by more than 3 million for the week ending March 21, with the hospitality industry particularly hard hit, the Labor Department said Thursday.

Seasonally adjusted unemployment claims were 3.28 million, an increase of more than 3 million from the previous week’s revised level of 282,000, and the highest recorded increase in history, the Labor Department said. The previous high was 695,000 in October 1982.

All states reporting blamed the impact of coronavirus for the dramatic jump, officials said, as states and citites across the country shut down bars and restaurant dining rooms. Among states that had the highest increase in jobless claims, California, Washington state, Pennsylvania, Illinois, Texas, New Jersey and Missouri specifically cited layoffs in the foodservice industry contributing to the high numbers.

Labor Secretary Eugene Scalia said in a statement that the huge increase was not unexpected, given much of U.S. commerce is on hold as Americans shelter in place to prevent spread of the virus.

“The hard impact of this on American workers was anticipated in the bill passed by the Senate last night, which provides hundreds of billions of dollars in unprecedented funding for traditional unemployment insurance and pandemic unemployment assistance, and one-time cash payments of $1,200 or more to Americans making $75,000 or less ($150,000 for those who are married). Perhaps more important, the Senate bill also provides incentives and funding for businesses to keep their workers on payroll, so that, as soon as possible, we can spring back to the strong economic conditions we enjoyed just weeks ago.”

On Thursday, the Senate passed a $2 trillion stimulus bill that includes loans and other assistance for businesses that keep workers on the payroll, as well as sending $1,200 in cash to lower- and middle-income Americans as a financial lifeline.

The National Restaurant Association, meanwhile, on Wednesday said about 3 million restaurant workers have been laid off over the past three weeks, according to a survey of about 4,000 restaurant operators.

Landry’s Inc., for example, has temporarily laid off roughly 40,000 workers, according to Bloomberg.

Fertitta, who also owns the Golden Nugget casinos, urged government officials to allow businesses to reopen at limited capacity within a couple of weeks to avoid economic disaster. He said restaurants and casinos should be allowed to operate at 30% to 40% capacity to soften the economic impact and allow companies to stay in business.

Under current restrictions, all of Landry’s casinos are closed and restaurants that are offering takeout are only bringing in 4% to 5% of their typical business, so the company is burning through a few million dollars of cash per day, according to the report.

The NRA survey indicated a $25 billion loss in sales since March 1, a roughly 50% decline.

In New York City, which is leading the nation in coronavirus cases, an estimated 67,650  hospitality workers have been laid off or furloughed since March 20, when the governor put non-essential businesses across the state “on pause,” according to the NYC Hospitality Alliance.

The data comes from a survey of 1,870 restaurants, bars and nightclubs, which are limited to takeout and delivery only.

“It’s devastating,” said Andrew Rigie, the alliance’s executive director, in a statement. “Restaurants, bars and clubs and the people who work in them are the fabric of our communities. We need to do everything in our power, as fast as possible, to support these businesses and revive New York City’s economy, while protecting public health and safety.”

Rigie urged city officials to go further than the economic stimulus by offering rent and mortgage forgiveness and allowing the state’s sales tax remittance to be converted into cash grants for businesses to have immediate money on hand to cover expenses.

The alliance is also pushing for the government to order insurance companies to cover COVID-19 in business interruption policies, and to cap fees on third-party delivery.