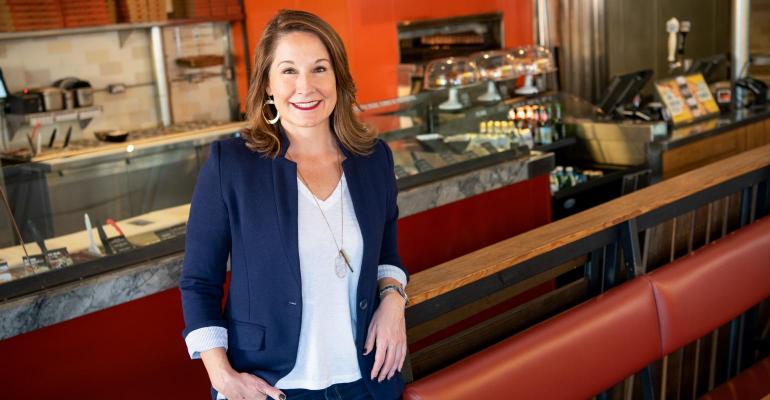 Mandy Shaw took the helm of Blaze in 2019 and previously had been with multiconcept operator Bloomin’ Brands.
Coronavirus>Restaurants Ready

Mandy Shaw shares lessons learned from the pandemic, and advice for how to lean into growth opportunities in 2021

The COVID-19 pandemic forced Blaze Pizza to rethink its operations and adopt a “guerilla mindset” that will serve it well going forward, the company’s CEO said in a webinar kicking off the new CREATE series from Nation’s Restaurant News and Restaurant Hospitality on Tuesday.

“A guerilla mindset is something I talked about a lot with our franchisees,” said Mandy Shaw, who took the helm of Blaze in 2019 and previously had been with multiconcept operator Bloomin’ Brands. “It means you need to be agile and think about things a little bit differently.”

Related: How restaurant menus are responding to changing consumer tastes in a post-COVID era

The days of creating a restaurant brand and then growing it for years with few changes no longer exist, she said. Instead, consumers will expect brands to be able to adapt quickly to their changing wants and needs, whether that means rolling out digital ordering and curbside pickup, as many restaurants did in 2020, or finding new ways to satisfy them through menu innovations.

Agile development is a skill set Shaw said she learned during the time she spent working in the technology industry, and it has broad applications for the restaurant industry as well. It involves having cross-functional teams that are empowered to respond quickly to consumer insights and to feedback from within the company.

“You have to rapidly understand what the consumer wants and then act on it,” she said. “If you don’t have an agile team, and the ability to react quickly and thoroughly, you might get a little bit left behind.”

Blaze Pizza, which offers a fast-casual, assembly-line experience that allows for personalization, did not appear to be optimally positioned for success when the pandemic hit last March. It had been tallying 80% of its sales from dine-in customers, and its digital ordering capabilities were only a few months old.

The company quickly ramped up its nascent digital program and created operational work-arounds to staff its pizza lines in new ways that enabled more social distancing in its kitchens.

It also communicated daily with its franchisee council, and weekly with all of its franchisees, and worked individually with its operators on a store-by-store basis to try to overcome each location’s specific challenges.

“It was about, ‘Let’s not sit around and admire the problem. Here are the things we need to do to get out there and go after it,’” said Shaw.

A significant challenge faced by many operators, but especially those in the fast-casual space, continues to revolve around replicating the in-store experience for customers who are dining off-premises. Companies need to understand their brand, and ensure that they retain their brand’s authenticity as they expand that and other areas of their business, she said.

Despite the operating challenges and some slowdowns in construction caused by the pandemic, Blaze was still able to add 20 new units last year and is on pace to add 30 new units in the year ahead. It also bolstered its team, adding a new chief technology officer and a new chief marketing officer to help guide the company, which currently has about 340 restaurants, on its next phase of growth, Shaw said.

Characteristics she looks for in people include having a “low ego, high intellectual curiosity, and a propensity for action,” Shaw said. “That’s a team that will work will together … and drive outsized results.”

And although she said she sees promise for the industry in the growth of ghost kitchens and virtual brands as a way to make more efficient use of existing space, those don’t make sense for Blaze at this time. She did hint, however, that the company might have something along those lines planned for the future.

Other trends she sees for the industry include smaller footprints with more efficient operations for the quick-service segment, and for some fast-casual operators as well. Again, the danger is that brands will lose some of their authenticity, or their differentiating characteristics, if they eliminate too much of the experience that consumers expect from them, said Shaw.

Another key attribute that will serve the industry well going forward is what Shaw described as “humanity,” which involves the recognition and appreciation of other people, whether they are customers, franchisees or employees.

At Blaze, that is reflected in the company’s efforts to recognize the birthdays and other life events of its franchisees, and the creation of an online “watercooler chat” where employees can post photos of their pets, as two examples.

“It builds family and enhances community,” said Shaw. “The is what consumers want from brands. They want that humanity and authenticity.”