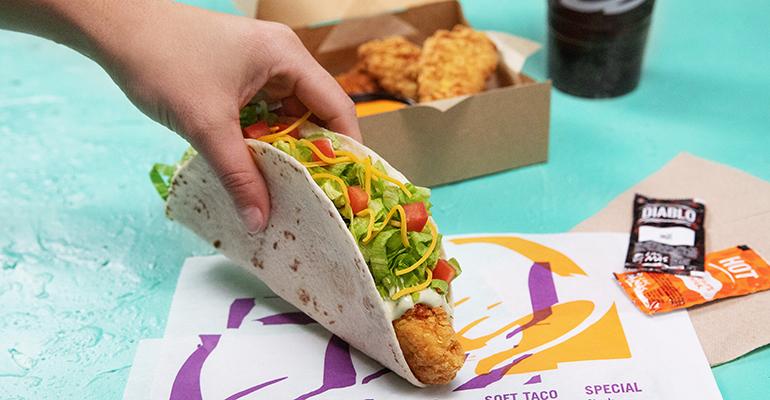 Chain is fast-tracking first ever chicken strips and dip LTO

Burgers are the most popular foods ordered on quick-service menus. But when it comes to growth, chicken orders are coming on strong.

Chicken sandwich servings are up 4% year-over-year, while burger servings are flat, according to The NPD Group. The summer Chicken Sandwich Wars between Popeyes Louisiana Kitchen and Chick-fil-A intensified the buzz. Now, non-chicken brands are taking notice including Taco Bell.

Related: A look at the most successful LTOs of the year — so far

The Irvine, Calif.-based Mexican quick-service chain is fast-tracking a test of fried chicken strips with a new spicy dipping sauce – a brand first.

On Tuesday, Taco Bell gave Nation’s Restaurant News a sneak peek taste of the Crispy Tortilla Chicken strips, which debut Thursday in more than 170 restaurants in Houston and Dayton, Ohio.  After testing, the brand hopes to launch the strips nationwide by summer 2020 –  a relatively quick turnaround for a chain of nearly 7,000 restaurants.

“We’re just so excited about it,” Krieg said.

Taco Bell's food innovation team has been working on perfecting a fried chicken recipe for about eight to nine months -- long before the Chicken Wars broke out this summer.

Still, Krieg said the brand is motivated by the fried chicken buzz and wants a piece of the action. But on Taco Bell’s terms. No sandwich copycats.

The team tested about 100 iterations before nailing down a recipe that fits Taco Bell’s playful Mexican-inspired flavor profiles.

The all-white meat chicken is marinated in tangy jalapeno buttermilk and then rolled in a blend of panko bread crumbs and crushed white tortilla chips. The chip-flavored coating combined with the buttermilk brine and the new Creamy Chilli Pepper dipping sauce creates the Taco Bell twist that the test kitchen strives for, Executive Chef Rene Pisciotti said.  Customers can also order it as a taco, which comes stuffed with one strip. The strips are about 4 to 5 inches long.

Ultimately, the brand is hoping Crispy Tortilla Chicken will replicate the popularity of Nacho Fries. 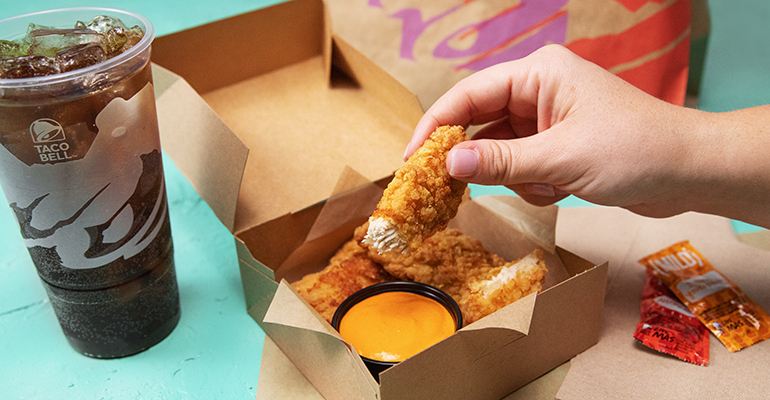 Taco Bell, a division of Yum Brands, turned its version of fries into a $1 billion business. The seasoned fries, served with a side of cheese sauce for dipping, have appeared on the menu four times in less than two years. This year, Taco Bell expanded the line with spicier and pricier versions: Steak Rattlesnake Fries and Steak Reaper Ranch Fries.

Crispy Tortilla Chicken has the potential for line extensions if it turns out to be another homerun for the brand. It could also find a permanent spot on the menu, company spokesman Matt Prince said.

This is not Taco Bell’s first foray with fried chicken.

Restaurants featured a red chili flavored strip in 2015 but it did not come with a dipping sauce. The Naked Chicken Chalupa, which features a taco shell made of fried chicken, has been an on-again, off-again menu item since early 2017. The last time the LTO was on the nationwide menu was in January. There’s no plans to bring it back before Crispy Tortilla Chicken debuts, but that doesn’t mean fans won't ever see it again, Krieg said.

Roughly 45.1% of U.S. restaurants feature chicken strips on menus as of the third quarter of 2019, according to Datassential. That makes them slightly less popular than chicken sandwiches whose menu penetration at chains and independent restaurants was 48.6% for the same period. Still, chicken strips garner high affinity scores with consumers surveyed by the Chicago-based research firm.