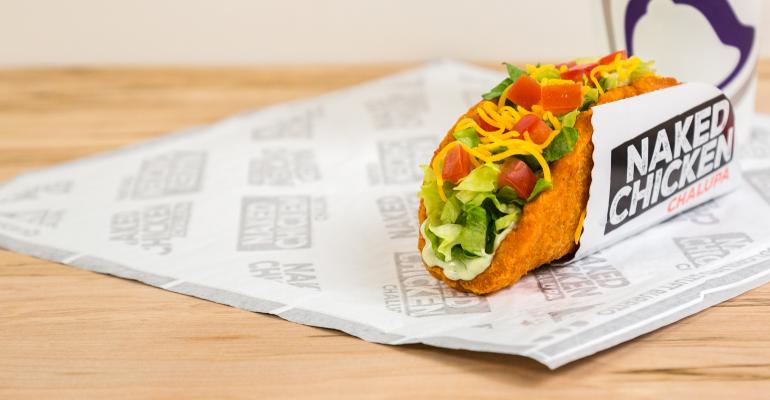 Menu item, featuring shell made of crispy chicken, has been in test for two years

Taco Bell plans to roll out its shell-less Naked Chicken Chalupa nationwide on Jan. 26, after two years of testing, the company said Wednesday.

The Irvine, Calif.-based division of Yum! Brands Inc. said the Chalupa shell is made with marinated, all-white crispy chicken and is stuffed with shredded lettuce, diced ripe tomatoes, Cheddar cheese and creamy avocado ranch sauce. It will be priced at $2.99.

“We feel confident that once our fans get a taste of the Naked Chicken Chalupa, they are going to understand exactly why this is our next big, fun and craveable innovation, following in the footsteps of the Doritos Locos Tacos five years ago and the Quesalupa just last year,” Marisa Thalberg, Taco Bell chief marketing officer, said in a statement.

The Chalupa was among items sampled in a 2016 preview with Nation’s Restaurant News senior editor Lisa Jennings. The Naked Chicken Chalupa will also be featured in Taco Bell’s $5 Box, which will include a Doritos Locos Taco, a crunchy taco and a medium drink.

Taco Bell is encouraging social media buzz leading up to the product’s launch with the hashtag #NakedChickenChalupa. Prizes will be announced as the date approaches, the brand said.

Correction Jan. 11, 2017: This story has been edited to correct the spelling of Taco Bell Corp.’s headquarters city.