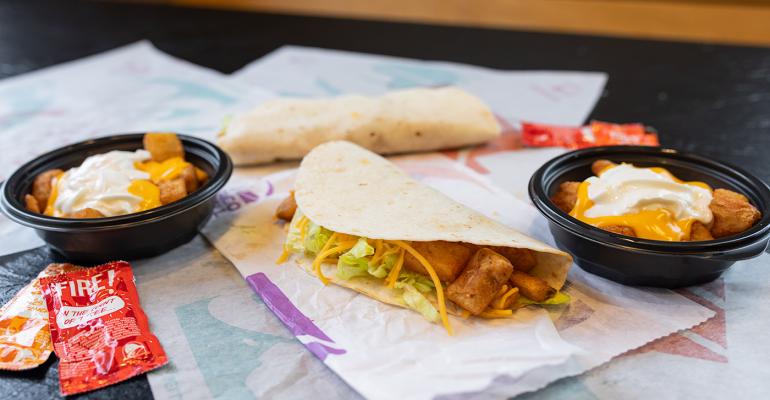 Taco Bell
Taco Bell is bringing back two fan favorites after they were on hiatus for five months.
News>Quick Service

Taco Bell announces the return of Cheesy Fiesta Potatoes and Spicy Potato Soft Tacos; Beyond Meat product is on the horizon

“The return of our beloved potatoes is just the first step in showing our fans the strong continued commitment to vegetarian we are making this year,” Liz Matthews, Taco Bell’s global chief food innovation officer said in a statement.

Last summer, we reported on the Taco Bell menu downsizing, which started Aug. 13 and included the potato items, along with 10 other menu favorites, including the Nachos Supreme and in-store Quesarito. The items were removed at the height of the COVID-19 pandemic due to a variety of factors, including cost and speed.

The disappearance of the Cheesy Fiesta Potatoes and Spicy Potato Soft Tacos caused a ruckus on social media, with longtime fans decrying the move as “devastating.” But now Taco Bell is celebrating the return of these items with a special message from Mark King on social media with the use of an Instagram-friendly “potato filter.”

And now, an announcement from our CEO. pic.twitter.com/JHHJMrPEJH

“It’s a new year with new possibilities and we’re bringing them [the potato items] back,” Taco Bell CEO Mark King said in a promotional message on Twitter through the brand’s potato filter. “We’re working hard to make things right.”

King also hinted at a new menu item coming in 2021: a partnership with Beyond Meat. While Taco Bell declined to elaborate on what the new product will be or when it will be arriving, a Taco Bell representative did tell Nation’s Restaurant News that the product will be completely unique to Taco Bell and will be tested sometime over the next year.

While Beyond Meat announced partnerships with multiple national restaurant chains in 2019, Taco Bell always relied on their own in-house vegan and vegetarian proteins and fillings, including beans and potatoes. Fellow Yum brands Pizza Hut and KFC announced Beyond Meat partnerships in 2020: KFC began testing Beyond fried chicken in July 2020, and Pizza Hut debuted two pizzas topped with Beyond sausage crumbles in Nov. 2020.

“We have long been a leader in the vegetarian space, but this year, we have more meatless options in store that vegetarians, veggie-curious and even meat-eaters will love,” Matthews said in a statement.