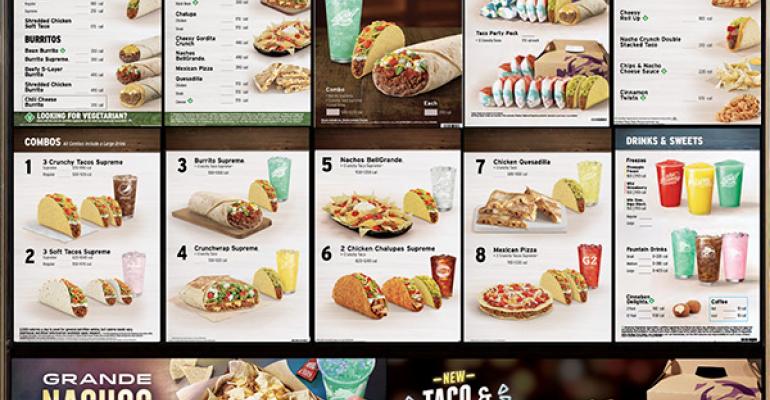 Taco Bell is eliminating 12 items from its menu

4 items, including Beefy Fritos Burrito, come from the value menu; the trimming comes less than a year after chain removed 9 items in a decluttering effort; company says it is making room for plant-based items

Taco Bell is eliminating 12 more items from its menu, including four items from its popular Cravings Value menu – a move made to streamline operations and clear the space for new items such as plant-based meals.

The downsizing, which starts Aug. 13, comes less than a year after the Irvine, Calif.-based chain cut nine items from its menu last year to declutter it.

Update: In September, Taco Bell announced a final round of 2020 menu trims that will occur in November. More details in this link.

“And while change is hard, a simplified menu and innovation process will leave room for new fan favorites, continued progress in categories such as plant-based diets, and even opportunities for the return of some classics on a limited time basis,” the company said in a statement released Friday.

While it is eliminating four value items, Taco Bell said it is permanently adding a $1 Beef Burrito to the Cravings menu. The company is also bringing back the $5 Grande Nachos Box for a limited time.

The company said it will continue to innovate and bring new items to the menu; however, the decision to remove these items was made to streamline operations and improve customer and team member experiences.

“The decisions were made about specific menu items after months of analyzing the new way we are running our restaurants and strategically weighing a variety of factors, from cost to speed,” the company said in a statement. “Now that the majority of our business is via drive-thru, we need to deliver on speed of service for our customers.”

During the pandemic, Taco Bell has experienced significant traffic declines during breakfast and late-night occasions, according to its parent company Yum Brands.

In late March, some Taco Bell restaurants temporarily stopped serving breakfast. In addition, the late-night segment has been hit hard as fewer people are out in the evening due to the temporary closures of bars and entertainment events.