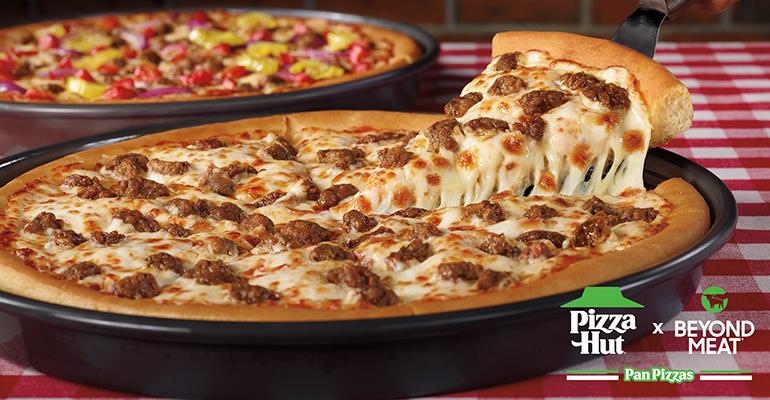 A pepperoni alternative could be next as the Yum Brands division beats fast-food rivals Domino’s Pizza and Papa John’s with nationwide debut of plant-based sausage topping; Beyond Italian Sausage Pizza and the Great Beyond Pizza debut Nov. 10

A year after testing a plant-based product by MorningStar Farms, Pizza Hut has announced plans to go with Beyond Meat for the chain’s first nationwide launch of a pizza featuring a plant-based meat topping.

With the debut of Beyond Pan Pizzas, the division of Yum Brands beats fast food rivals such as Domino’s Pizza and Papa John’s with the introduction of pizzas made with proprietary plant-based sausage crumbles. The new pizzas, co-created by Beyond Meat and Pizza Hut’s culinary team, debut today, Nov. 10.

The two options include the Beyond Italian Sausage Pizza and the Great Beyond Pizza.

“We believe, when customers choose a plant based option they shouldn’t have to sacrifice on the taste which is why for now, we are starting with sausage,” ” David Graves, chief brand officer, said in a statement sent to Nation’s Restaurant News. 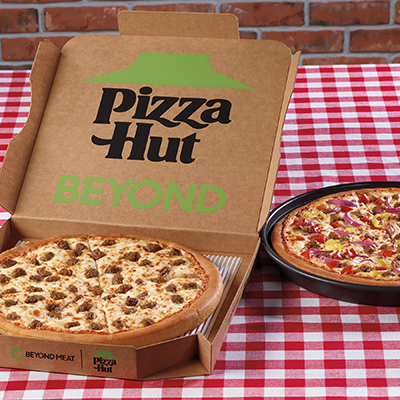 “I’d challenge anyone to go try the new Beyond Pan Pizza and tell the difference. I shared it with friends and family, and they couldn’t,” Graves said in a prepared statement.

The company did not provide prices.

Graves said the chain hasn’t ruled out tackling a pepperoni substitute in the future. Pepperoni, along with sausage and beef, are the brand’s top three most popular toppings.

“Pepperoni is our best-selling topping – we definitely want to eventually have both,” Graves said. “We’re always thinking about what’s next in the world of pizza and never stop exploring ways we can further enhance and expand the pizza eating experience.”

“The Beyond Italian Sausage features a proprietary blend of spices,” he said. “It’s only available at Pizza Hut.”

The Plano, Texas-based chain is not the first pizza company to add a plant-based option to its menu. Last month, casual dining chain California Pizza Kitchen, which filed for Chapter 11 during thte pandemic, added a plant-based chicken substitute to its menu.

The meat alternative can be found on the new BBQ “Don’t Call Me Chicken” pizza. The pizza is topped with Chicketts, a plant-based chicken substitute by Worthington Food Service. It is made mostly of wheat gluten and soy protein isolate.

For more than a year, Domino's has been testing plant-based topping options internally, but has yet to bring anything to market.