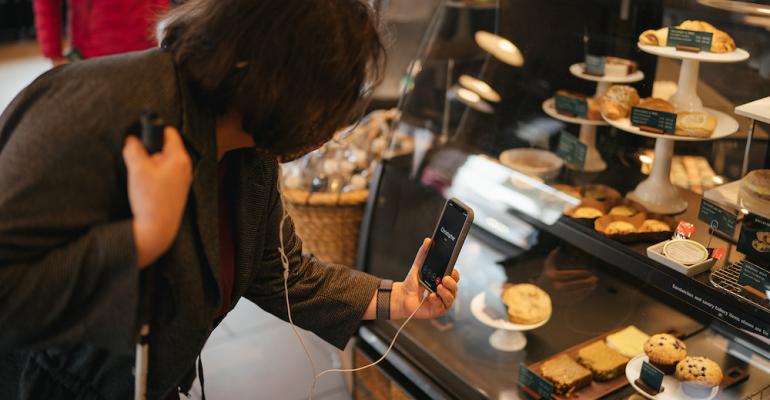 A person with vision loss gets help from a live visual interpreter via the Aira app.
News>Quick Service

Starbucks Corp. on Monday said it would introduce large-print and braille menus to all of its restaurants across the United States and Canada starting this summer.

The Seattle-based coffeehouse company on Monday also began offering a service that connects blind and low-vision customers to live trained visual interpreters who can help them make their purchases.

The service, Aira, is offered in partnership with Aira Tech Corp., based in San Diego. It allows customers who download the Aira app to have the layout of restaurants described to them and to have the menu read to them, as well as to get more specific details of what’s in front of them, such as ready-to-eat and -drink options.

Starbucks customers can use the Aira service for free for up to 30 minutes per visit, according to a release from Aira.

Related: Starbucks announces the nationwide release of oat milk and other nondairy beverages

The service was tested in seven cities earlier this year, Starbucks said.

In a story on its web site, Starbucks said Aria was also useful in helping customers with vision loss to navigate changes made in response to the coronavirus pandemic, reducing the need for them to touch things and helping them to maintain social distance.

The addition of Aira is part of Starbucks’ ongoing initiative to improve its service to people with sensory disabilities. The chain also has nine “Signing Stores” throughout the United States at which all employees are proficient in American Sign Language, making it easier for people with hearing loss to shop there. Starbucks says the Signing Stores are also intended as places where members of the deaf and hard-of-hearing communities can connect.

The Signing Store in Washington, D.C., was also one of the sites where Aira was tested.

Starbucks’ Accessibility Office also is working with organizations such as the World Institute on Disability to make its stores, and its app, more accessible to disabled customers and employees.

Starbucks said the braille menus were developed in partnership with National Braille Press.