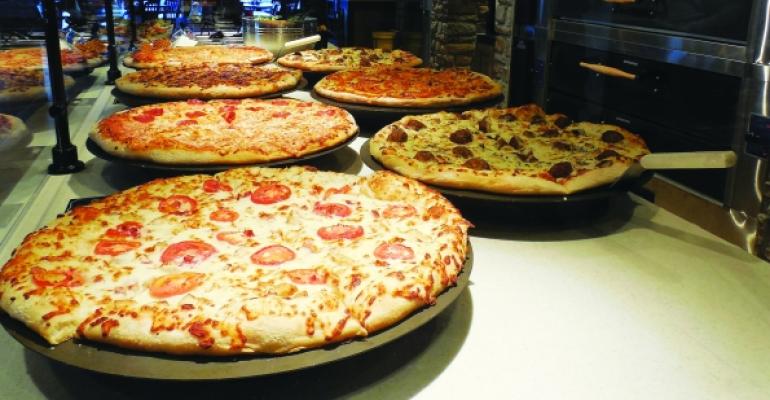 <p>Pizza Hut plans to remove artificial flavors and colors from pizzas sold at U.S. restaurants before the end of July.</p>
News>Quick Service

Pizza Hut said Tuesday that it would remove artificial flavors and colors from pizzas sold at U.S. restaurants no later than the end of July.

The effort by the Plano, Texas-based division of Yum! Brands Inc. coincided with a pledge by sister brand Taco Bell, based in Irvine, Calif., to remove artificial colors and flavors from most of its menu items, as well as certain additives, added trans fats, palm oil and high-fructose corn syrup, by the end of 2015.

Doug Terfehr, Pizza Hut director of public relations, said the initiative only applies to Pizza Hut’s domestic restaurants. As of March, Pizza Hut had 13,595 units, about 60 percent of which are in the United States.

“For more than a year, the Pizza Hut culinary team has been working alongside its suppliers to reformulate its menu, removing many of the artificial additives that have become common across the industry supply chain,” the chain said in a statement.

“The effort has meant continuous testing and redevelopment of products, all done to preserve the flavor people have come to expect from the brand but also to meet the desire of today’s customers who seek to know more about what’s in their food,” the company said.

Also in July, Pizza Hut said it will debut an interactive nutrition calculator and allergen tool on its website, and smartphone apps that will help customers tailor menu items to their needs, the company said.

Pizza Hut CEO David Gibbs added that “today’s consumer, more than ever before, wants to understand the ingredients that make up the foods that they enjoy.” Gibbs said the pizza brand was “committed to doing this the right way, and to make the changes that ensure only the highest quality and greatest flavors in our food.”

Pizza Hut said it has already eliminated partially hydrogenated oils and monosodium glutamate from its menu items, and reduced the sodium in its pizzas.

“By the end of 2015, 15 percent of Pizza Hut pizzas will have just one third of the daily recommended dietary allowance for sodium, and 20 percent of its pizzas will meet that criteria by 2020,” the company noted in its announcement.

While both Taco Bell and Pizza Hut have announced plans to remove artificial ingredients, Louisville, Ky.-based Yum has not yet revealed any such plans for its KFC brand. Earlier this year, Yum released a corporate social responsibility report that indicated it was planning to eliminate the use of palm oil to fry chicken. Palm oil production has been criticized over habitat destruction and deforestation.

“It’s a challenge because our system is so large,” said Laurie Schalow, Yum vice president of corporate social responsibility. “It requires intensive testing and market testing once they find an oil that works and has the same flavor profile. And you have to work the supply chain to find that oil. It’s a good two-year process to change out that oil. It’s not as easy as some people think.”

The past few months have seen a flurry of large restaurant chains pledging to strip artificial ingredients from their menus.

Earlier this month, Panera Bread Co. reiterated its efforts to remove artificial additives and enhance transparency on its menus, and issued a “No No List” of ingredients it had stripped or would toss from its recipes.

Chipotle Mexican Grill Inc. said it has removed most genetically modified ingredients from its food, and also pledged to rid the menu of artificial ingredients. And McDonald’s Corp. and Chick-fil-A have pledged to eliminate human antibiotics from their chicken supplies.

Pizza Hut said it already uses meat toppings without fillers, and its meatballs are free of artificial colors, flavors and preservatives.

The brand said it also offers a variety of more healthful options, including “Skinny” slice pizza, with five pizzas of 250 calories or less per slice, and Udi’s gluten-free pizza prepared using procedures certified by the Gluten Intolerance Group.

”You don’t get to be a 57 year-old brand without keeping up with the changing needs of our consumers,” Gibbs said in his statement. “Our food journey is far from complete, and we will continue to work with our customers on this moving forward.”