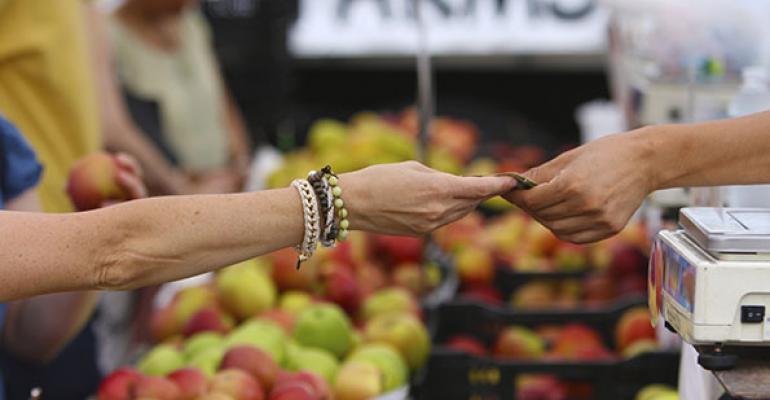 The Humane Society of the United States not only has an easier time securing a meeting with restaurant CEOs today than it did a decade ago; it needs less time to educate executives about why they’re there.

“Ten years ago, a lot of food companies we met with hadn’t heard of animal welfare issues before,” said Josh Balk, senior food policy director for the Humane Society of the United States. “Now, virtually every restaurant company knows about key animal welfare issues. And most are working with us.”

Consumers are demanding more responsible actions from foodservice establishments. And restaurants are complying with a host of initiatives designed to bolster their sustainable credibility.

Chains are eliminating antibiotics from chicken, taking egg-laying hens out of cages and phasing out the use of gestation crates for pregnant hogs. Some are also eliminating palm oil from their kitchens.

For many of these companies, such efforts could be a necessity, especially as restaurant chains like Starbucks and Chipotle Mexican Grill, as well as grocers like Whole Foods, have built entire businesses on the idea of a sustainable food supply.

“It’s terribly important,” said Gary Stibel, founder and CEO of the New England Consulting Group, which works with restaurants and hospitality companies. “And it’s less important to the stomach than it is to the brain and the wallet.”

But such shifts in food supplies could ultimately cost restaurants. Changes are often costly and take time, and supplies could be limited. There are already growing worries about the supply of organic food, for instance.

“Most of the burden is on suppliers,” said Konrad Gessler, project manager with the New England Consulting Group. “Our food system is not set up to provide customers with highly sustainable options.”

In any event, supply changes take time and are complex. Louisville, Ky.-based Yum! Brands Inc., for instance, said in its recently released corporate social responsibility (CSR) report that it is planning to eliminate the use of palm oil to fry chicken at its Kentucky Fried Chicken chain. Palm oil production has been criticized over habitat destruction and deforestation.

But switching from palm oil takes time. The ingredient gave KFC’s Original Recipe Chicken a particular flavor, which researchers must mimic with other oil blends. Additionally, Yum is a 41,000-unit restaurant giant, with three brands that operate globally.

“It’s a challenge because our system is so large,” said Laurie Schalow, Yum’s vice president of corporate social responsibility. “It requires intensive testing, and market testing once they find an oil that works and has the same flavor profile. And you have to work the supply chain to find that oil. It’s a good two-year process to change out that oil. It’s not as easy as some people think.”

In the meantime, Schalow said, the company is working to ensure that its supplies of palm oil are sustainable.

“But our main focus is to remove palm oil from our restaurants,” she said, citing health concerns surrounding the ingredient.

For years, poultry suppliers have used small doses of antibiotics to encourage the growth of chickens. But concern that such use contributes to the rise of antibiotic-resistant “superbugs” has led to a push to halt such use.

KFC has felt pressure to do the same, but the company indicated that the FDA is working on a requirement for companies to stop using human antibiotics in chickens by 2016.

“We’re going to comply with that,” Schalow said, noting that, “we do believe there is a use of antibiotics in chickens when they are sick,” which is a similar policy to the one McDonald’s is adopting.

Another issue also involves poultry: Cage-free eggs. Last month, Dunkin’ Donuts said it would examine the possibility of moving to a supply chain in which all the eggs used in its breakfast sandwiches come from cage-free sources. Ten percent of the eggs it uses this year will be cage free.

Over the years, other chains have announced plans to use cage-free eggs, including Burger King, Panera Bread and foodservice operators Aramark and Sodexo.

Still, Stibel noted that such decisions come with a price. Quick-service chains that adopt similar policies should remember that consumers still prefer buying fast food at low prices, he said.

“Finding balance is what makes this business so difficult,” Stibel said. “Otherwise, more people would be successful at it. They are going to push costs up. But it’s important to find a way to balance higher prices and costs with the need for value.

“In the final analysis, QSR is driven by good food at great value in the nick of time. Anything that slows things down, doesn’t taste good or costs too much is not going to sell.”

Correction: April 8, 2015  An earlier version of this story misstated the location of Yum! Brands Inc.'s headquarters. It is located in Louisville, Ky.