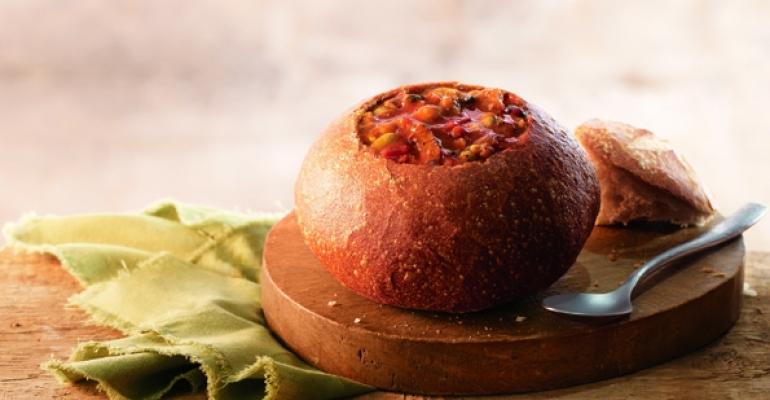 Bakery-café reiterates campaign to reduce additives in its food

Panera Bread Co. reiterated Monday its efforts to remove artificial additives and enhance transparency on its menus, and issued a “No No List” of ingredients it had stripped or would toss from its recipes.

The St. Louis-based bakery-café chain, with more than 1,900 units, said last June that it was targeting the removal of artificial colors, flavors, preservatives and sweeteners by 2016.

The “No No List” has 34 ingredients, including lard, that Panera said are not in today’s menu items, and 47 ingredients that it said are in the process of being removed.

An industry watchdog greeted Panera’s “No No List” with mixed reviews.

“Just because something is artificial or its name is hard to pronounce doesn’t mean it’s unsafe. Some of the additives Panera is ditching are perfectly innocuous, such as calcium propionate or sodium lactate — so those moves are more about public relations than public health,” Michael F. Jacobson, director of the Center for Science in the Public Interest, said in a statement.

However, Jacobson applauded Panera for its intent to remove additives such as artificial food dyes, partially hydrogenated oils, butylated hydroxyanisole and some other additives.

“We see a long-term, secular evolution, as more and more consumers seek to both eat healthy and eat foods they crave,” Shaich said. “They're dealing with the conflict.”

A decade ago, Panera introduced chicken raised without antibiotics to its menu, Shaich noted, and even major producers recently announced they were working to remove antibiotics from the supply chain. And he noted that five years ago, Panera voluntarily posted calories on menus nationwide, which the government has now mandated for some multi-unit restaurant brands.

“Today, all innovation in food, bakery, marketing and store design are being rooted in our mission to offer clean, transparent and craveable food, along with an elevated experience,” Shaich said.

Among food changes introduced this year are broth bowls and a relaunch this month of all the salads, which Shaich said is based on “clean” dressings, with no artificial colors, flavors, preservatives or sweeteners.

“This is a big step for us in bringing our food policy to life,” he said.

In September, he added, customers will be able to upgrade any of Panera’s deli turkey sandwiches with protein that is free of antibiotics and processing nitrates, and flatbreads that will feature 15 grams of whole grain in each serving.

Panera will launch a marketing campaign in June to highlight the new positioning, he said.

Shaich told the Associated Press that the removal of the “No No List” ingredients will reduce shelf life for some ingredients, but the efforts don’t have to raise foods costs.

Panera’s “No No List” came on the heels of Chipotle Mexican Grill Inc.’s announcement last week that it would remove all genetically modified ingredients from menu items served at U.S. locations.

The Denver-based fast-casual company, which has 1,831 units, has been working to become entirely GMO-free since 2013 at its namesake Chipotle Mexican Grill chain, as well as its 10-unit sister brand ShopHouse Southeast Asian Kitchen.

As of March 31, Panera had bakery-cafés in 45 states and Ontario, Canada, operating under the Panera Bread, Saint Louis Bread Co. and Paradise Bakery & Café brands.