/sites/all/themes/penton_subtheme_nrn/images/logos/footer.png
Recent
Recent
Trending this week: KFC is the latest restaurant chain to offer college tuition coverage
Feb 02, 2023
Estate of Subway co-founder Peter Buck donates half of the company to foundation
Feb 01, 2023
Wetzel's Pretzels banner year sets the stage for historic 2023
Feb 01, 2023
Why McDonald's marketing is so powerful
Feb 01, 2023
How Black Bear Diner plans to stick to its roots as it expands
Jan 31, 2023
Featured
The emergence of mocktails
Jan 23, 2023
36 restaurant industry predictions for 2023
Dec 21, 2022
10 restaurant chains making waves in the breakfast space
Dec 14, 2022
How eco-friendly Seattle restaurant chain Just Poke is doubling in size in 2022
Nov 17, 2022
Papa John's
brought to you by 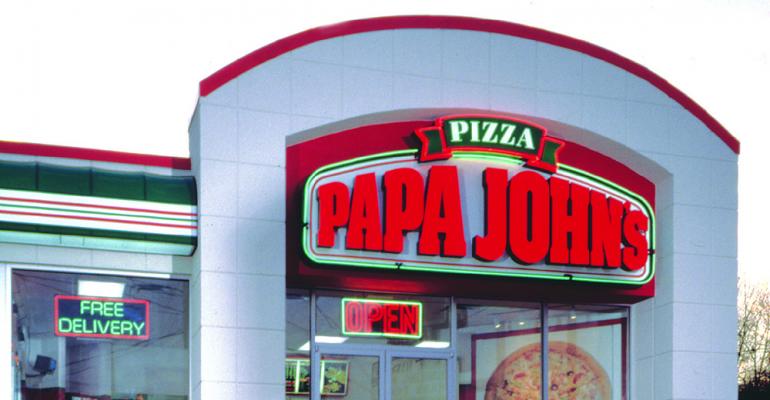 Papa John’s International Inc. ended 2018 with its fifth straight quarter of declining sales, despite fourth-quarter turnaround efforts that included menu promotions and the rollout of a new rewards program.

On a call with analysts, CEO Steve Ritchie said the results — which come after months of legal battles and PR problems involving founder and former CEO John Schnatter — “continue to reflect the consumer sentiment challenges our brand has experienced in the U.S.”

“Sales were impacted by the conversions of the company’s new loyalty program and ineffective promotions,” he said. “Our creative and value offerings have not resonated with consumers in a heightened competitive environment.”

Ritchie added that the company did not expect turnaround efforts to take hold until later this year. However, he cited positive same-store sales trends in February — when the company accepted a $200 million from hedge fund Starboard and named three new directors to the board — as a sign that the company was on the right track.

At the time, the company also rejected a similar counter-offer from Schnatter, who later amended his ongoing lawsuit against Papa John’s, which now asks for a reversal of a new company policy that requires Starboard investors to vote in favor of Papa John’s preferred directors.

The company has been working to distance itself from Schnatter, once the face of the brand, since he made controversial racial remarks last year. Schnatter stepped down as chairman last July, but still owns 30 percent of Papa John’s and has a seat on the board.

In a phone interview with Nation’s Restaurant News, Ritchie said Papa John’s fourth-quarter results were hampered because the company was trying out too many turnaround strategies at once.

“We did too many things at the same time, which put too much pressure on the check,” Ritchie said. “We tried to garner broader attention to the brand with deals, but then it was too much of a focus on promotions. We need to have a more balanced approach of premium offerings and deals.”

As part of this strategy of doubling down on premium offerings, Papa John’s is implementing a soft-launch of six new specialty pizzas in March: Ultimate Pepperoni, Meatball Pepperoni, Philly Cheese Steak, Fiery Buffalo Chicken, Zesty Italian Trio and the Super Hawaiian. Later this year, Papa John’s will also be introducing the Hot and Honey Chicken and Waffles Pizza, which fans chose in a social media contest.

In addition to focusing on new menu offerings, Papa John’s will also work with Starboard investors on reevaluating the chain’s approach to people, brand, value, technology, and unit economics.

“In the short term, we will use half of the $200 million investment to turn things around in terms of sales improvements,” Ritchie said. “In the long term, we are still the brand that has been perceived to be the quality leader among our competitors, but that gap has closed a bit because we have not been telling our story clearly enough. We’re doing a lot of creative thinking in terms of social and digital engagement and community involvement.”

Ritchie said that immediate discussions of selling the company have been shelved for now.

“We looked at an array of options, but we arrived at this decision we’re going to focus on this investment for now,” he said. “We understand our fiduciary duties and will be open to other options in the future, but this is our primary focus now.”