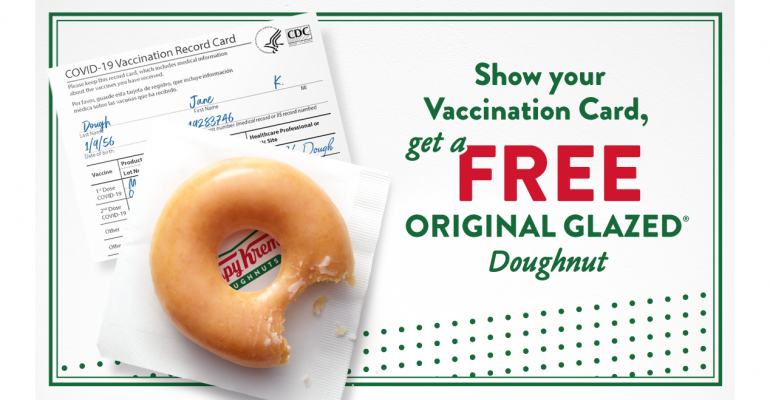 Vaccination will come with perks: Krispy Kreme offers free donuts all year to customers who get inoculated

Many operators believe that widespread vaccination of the population against COVID-19 will play a critical role in the recovery of the industry, and they are rewarding their customers who get the vaccine.

“My industry will not survive if people don’t take the vaccine,” said Bill Stetson, owner of Rumbleseat Bar and Grille, a family dining restaurant in Chicopee, Mass. “Otherwise this [pandemic] will just never end and go on forever.”

Rumbleseat has been offering 20% off all orders every Monday for customers who get vaccinated, and so far the response has been positive, he told Nation’s Restaurant News.

On Monday, Winston-Salem, N.C.-based donut chain Krispy Kreme said it would give anyone who shows a valid vaccination card a free Original Glazed donut every time they visit a Krispy Kreme location throughout the rest of the year.

“We all want to get COVID-19 behind us as fast as possible, and we want to support everyone doing their part to make the country safe by getting vaccinated as soon as the vaccine is available to them,” said Dave Skena, chief marketing officer, Krispy Kreme.

The chain also said it would support health care workers and volunteers who are helping administer vaccines by delivering free doughnuts to select vaccination centers throughout the country during the coming weeks. Krispy Kreme is also offering up to four hours of paid time off for its employees to encourage and enable them to get COVID-19 vaccinations, the company said.

“From the onset of COVID-19, Krispy Kreme has rolled out several ‘acts of joy’ acknowledging and aiding healthcare workers, students, teachers, coaches, neighbors and others with millions of free doughnuts for themselves and to share safely with others,” the company said in a statement to NRN. “Providing free Original Glazed doughnuts to those who get vaccinated is another gesture that we hope sweetens people’s lives as the country accelerates to put this virus behind us.”

Krispy Kreme has given away about 30 million doughnuts during the pandemic, the company said.

“We have no concerns about that number going up in order to show sweet support to those doing their part to make the country safe by getting vaccinated as soon as the vaccine is available to them,” the company said.

At Rumbleseat, Stetson said the promotion was more about rewarding his customers, many of whom work at the nearby Bay State Medical Center, for the work they have done treating and caring for patients during the pandemic, as opposed to driving new business.

“Most of the people who are coming in for the promotion are already customers,” he said. “The emergency room doctors and nurses at the start of this were there on the front lines taking care of this mysterious thing, and they were getting it themselves, and sometimes getting it again six months later. I want to thank those people.”

Rumbleseat opens at 8 a.m., he noted, just in time for the ending of the overnight shift at Bay State Medical Center, and many of the facility’s workers visit the restaurant after their shift, Stetson said.

In addition, he said he hopes that by making a public statement about his confidence in the efficacy and safety of the vaccine, he will encourage more people to feel comfortable about getting vaccinated.

He said he plans to continue offering the promotion until the mask mandate has been lifted in Massachusetts.

Other restaurants around the country have been conducting similar promotions. Upscale Italian restaurant Oak & Reel in Detroit, for example, launched a 50% off promotion when it reopened last month, according to a report in the Detroit Free Press. And in Jersey Shore, Pa., the Jersey Diner has been offering a 10% discount to customers on the day they receive a vaccination.

"This has been a rough year for everybody, and we know a lot of people are traveling from out of the area to Jersey Shore to get their vaccine, and we thought it would be a nice thing to give out a 10% coupon," said co-owner Melanie Palski in an interview with local TV station WNEP.