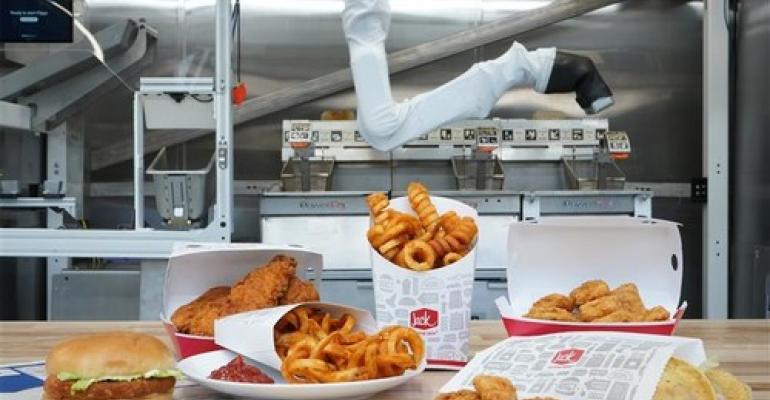 Miso Robotics
Jack in the Box is testing use of the frying robot Flippy and drink bot Sippy in a unit in San Diego.
News>Quick Service

Jack in the Box Inc. continued to struggle with labor issues in the second quarter, with about half of company-owned unit dining rooms remaining closed because of staffing issues, the company said Thursday.

A “meaningful number” of restaurants were operating at reduced hours during the April 17-ended quarter, but CEO Darin Harris said efforts are underway to improve hiring and retention, including wage hikes in select markets — especially to restore staffing levels for the late-night daypart, which he said the brand has potential to dominate once they can fully execute.

Related: Jack in the Box explains why it plans to acquire another Mexican chain

Jack in the Box’s same-store sales during the quarter dipped 0.8% systemwide, with declines in traffic offset by increases in average check, largely as a result of menu price hikes. The restaurants were also still seeing the negative impact of Omicron and tougher comparisons with last year, when consumers were supported by stimulus checks.

But labor was the challenge more under company control, and Harris said the chain is seeing positive results from investments in recruiting and retention at company units, looking at what workers value to improve messaging, and using tactics like direct mail and referrals. In the mostly company-owned Los Angeles market, for example, he said units saw a 7% increase in staffing and are nearly at pre-pandemic levels.

San Diego-based Jack in the Box Inc.’s acquisition of the Del Taco chain was completed during the quarter, bringing that brand’s 599 company and franchised restaurants into the fold with Jack in the Box’s 2,207 units. The marriage is expected to bring beneficial synergies, particularly related to the supply chain, Harris said.

“With the addition of Del Taco, we are now a bigger, stronger company, well-positioned to take share and drive significant innovation, growth and shareholder value,” he said.

Del Taco’s systemwide same-store sales increased 2.5% during the quarter, with sales boosted by the brand’s 20 under $2 value platform and strong limited-time offer performance, as well as a higher average ticket raised by menu price increases.

“Industry winners will find ways to maintain traffic while raising price in other areas of the menu, and I believe this value initiative hits the mark,” Harris said of the Del Taco’s barbell strategy of mixing value and more-premium offerings.

Harris said both brands have pricing power, and menu prices will likely go up further in the second half of the year.

Jack in the Box will continue its “hook-and-build” strategy of using more value priced menu options to draw customers in, then upselling with attractive add-ons to build the ticket.

Harris also said a number of value-focused menu offerings are coming in 2023. “We have more new menu items on the testing counter than we’ve seen since this new management team started,” he said.

During the quarter, Jack in the Box also saw positive results from a reimaging package officially launched in the second quarter that included store enhancements, new packaging and uniforms.

“It is imperative we get our current base of restaurants to a new image, which not only impacts restaurant performance, but also helps attract franchisees to grow the brand in the future,” said Harris.

The company has a reimage tenant improvement program, and 12 units are in the design and permitting stage for the refresh, with another 136 franchised restaurants approved for upcoming projects.

Harris pointed to a company unit in Yuma, Ariz., for example, where the size of the parking area was doubled, the layout was reconfigured for better traffic circulation, and a wide-lane drive-thru was added, alongside a remodel of the dine-in area. Early results indicate a 25% lift in same-store sales, exceeding $100,000 in weekly sales driven by transactions, he said.

Jack in the Box has also been testing the use of automation, including cheese pumps, automated shake machine cleaning, and tests with Miso’s Flippy 2 (frying) and Sippy (for drink prep) robots, as well as looking for ways to simplify the process of building menu items to improve speed.

Jack in the Box ended the quarter with a net decrease of one restaurant — the company opened five units but closed six. But Harris said the system was on pace to reach its goal of 4% unit growth by 2025. The brand has 54 signed franchise agreements for a total of 218 restaurants, of which 12 have opened.

Del Taco also had a net decrease of one restaurant, with one opening and two closures.

Revenues for the quarter were $322 million, compared with $257 million a year ago, including partial-quarter results for Del Taco starting with the close of acquisition on March 8.