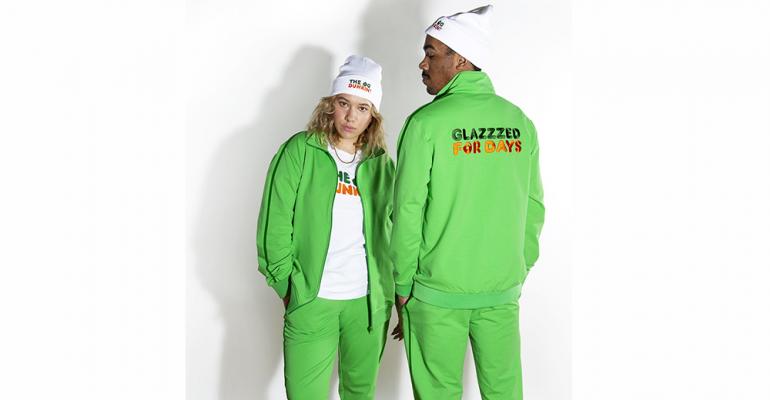 Dunkin’ is releasing its latest collaboration with entertainer Snoop Dogg and plant-based meat company Beyond Meat today, a clothing line of streetwear. But this isn’t just any line. The sweat suits and joggers are covered in images and phrases associated with the rapper and Dunkin’.

The streetwear collection follows current fashion trends that rely on a younger, more casual clothing style wherein sweat suits work in public and not just in the home. This brings together Snoop Dogg’s status as a cultural figure and the Canton, Mass.-based Dunkin’s status a major coffee QSR brand, blending the two in the cultural zeitgeist.

Clothing items include a bomber jacket, beanie, tracksuit, joggers and long and short sleeve t-shirts. All of the items have the label “SNOOP x BYND x DNKN’”.

One of the phrases, “Glazzzed for Days,” is a nod to Snoop Dogg’s very public penchant for marijuana. The expression “blazed” is often used to describe someone who is high on the drug. The modified phrase is emblazoned on the back of the bright green tracksuit.

Another, “The OG Dunkin’,” is embroidered on the collection’s beanie hat and a t-shirt. “OG” means the original or the first and seemingly positions Dunkin’ as the original brand of its kind, and Snoop Dogg as one of the original rappers.

Beyond Meat, the plant-based meat company that partnered with Dunkin’ last year for the launch of the Beyond Sausage sandwich, unveiled the special “D-O-Double Glazed” sandwich in January of this year with brand ambassador Snoop Dogg.

To harken back to the sandwich collaboration in January, the long sleeve t-shirt has the saying “D-O Double Glazed,” which itself is a reference to Snoop Dogg’s infamous song D.O. Double G, released in 2004.

The collection goes a step further than the coffee chain has before with clothing; a previous holiday collection used former Bachelor influencers in promotions. The new one appears to be aimed at an audience the brand has been targeting lately: youth. This promotion comes on the heels of the brand launching an Instagrammable drink for Valentine’s Day.

Take a look at the collection, which was released today at the Dunkin’ online shop.