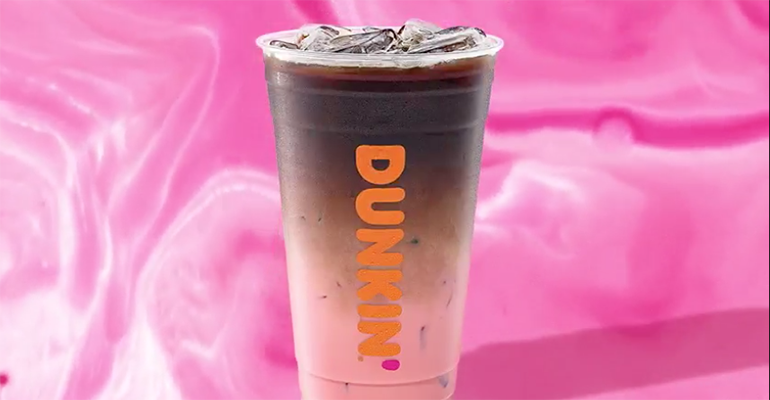 Dunkin’ Valentine’s Day lineup is a love letter to Instagram

Can big restaurant chains win when they do it for the ‘gram?

For Valentine’s Day, Dunkin’ is unveiling several limited-time offers including some Instagram-worthy drinks. These new releases are a continuation of the beverage-snack chain’s push to appeal to Millennials and Gen Z-ers.

The Canton, Mass.-based chain’s LTOs for Valentine’s Day includes the Pink Velvet Macchiato made of espresso and red velvet cake flavor with hints of cream cheese icing that “when served over ice creates a colorful pink-layered look for the perfect photo” according to a company release. The Pink Velvet Signature Latte, made with espresso and red velvet cake flavor, topped with whipped cream, mocha drizzle and hot chocolate powder, is also available. 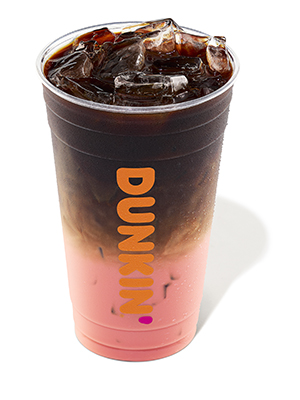 As part of the Valentine’s Day menut, the chain is introducing two donuts, both heart shaped. The Brownie Batter Donut is filled with brownie batter and buttercream filling, and the Cupid’s Choice Donut, is filled with Bavarian Kreme and frosted with strawberry icing.

Limited time offers increase the intrigue and anticipation around items according to Joseph Szala, Principal at Vigor branding, and though “the time for Instagrammable items is over, the power of influencers wanting to be seen is strong.  Szala thinks Dunkin’s new Valentine lineup is still a monetarily worthy idea especially timed to a holiday like Valentine’s Day.

The Pink Velvet Macchiato, above, is explicitly marketed as a “photographable drink” by the company but they are certainly not the first. The chain is a few years behind its top competitor, Starbucks.

In 2017, Starbucks unveiled the Unicorn Frappuccino. It was only sold for five days but lives on in infamy on the internet. The drink was made with ice, milk, pink powder, sour blue powder, crème Frappuccino syrup, mango syrup and blue drizzle. The drink changed colors once stirred, becoming purple.

Social media was quick to post about the drink and the #unicornfrappuccino tag on Instagram has over 150,000 posts. 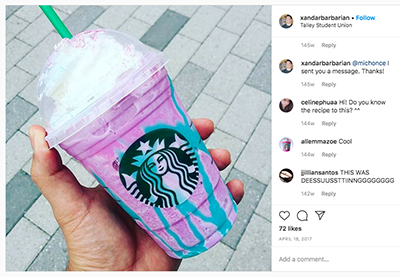 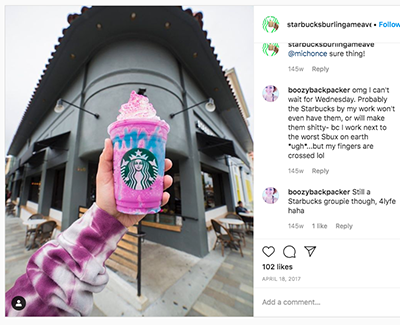 More recentcly, Starbucks has focused on its roasteries and environmental initiatives rather than the drinks with Instagram in mind. Some might say Starbucks has become a bit basic.

“[Dunkin’ is] trying to make Starbucks look like your dad’s coffee shop by being a little more zany, a little more out there, bolder and brighter,” said Szala.

Big chains may not have hopped on the Instagram, over-the-top trend en masse ,but smaller chains have been on this trend for years, just look at Black Tap.

The milkshake and burger restaurant is known for its wild “CrazyShake” milkshakes that always flow over the top of the glass and are topped with ingredients ranging from churros to whole cookies. Black Tap currently has five locations in the U.S. 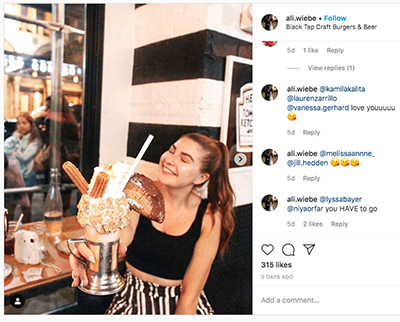 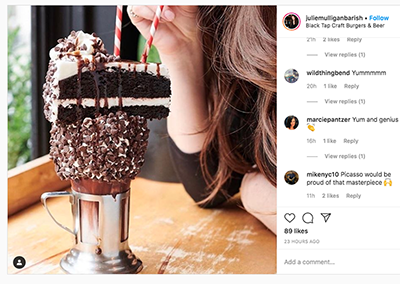 The newest shake is vegan, topped with an entire slice of cake.

While Black Tap can add a menu item easily onto its five company-owned locations,  while, a new menu item on a large chain restaurant  can take about three months to develop and bring down the line. A franchised chain like Dunkin’ can have an even harder time than say, Starbucks, which is mostly company-owned, aid Szala.

Ultimately, Dunkin’ will see if its bargain has paid off for both customers and franchisees.