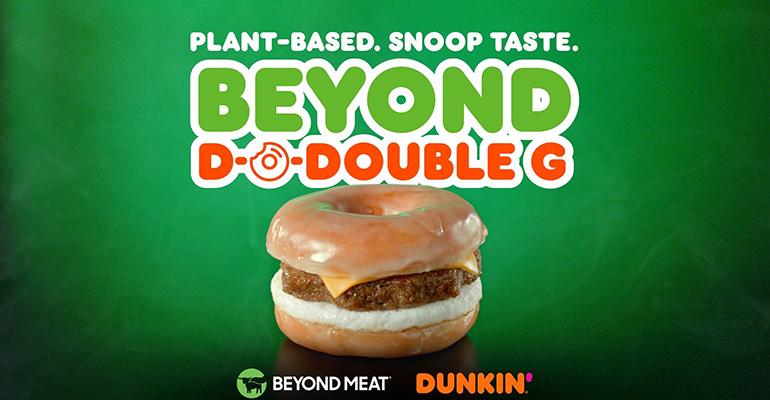 The sandwich will be followed by a clothing line, national TV spot

Dunkin’ and its “employee of the month,” rapper Snoop Dogg, have teamed up to create a limited time breakfast sandwich, the “Beyond D-O-Double G.”

The new sandwich is comprised of a Beyond Meat Sausage patty, egg and cheese sandwiched by a glazed donut, Snoop Dogg’s personal favorite.

The Canton, Mass.-based quick service chain with over 12,000 units introduced Beyond Meat  in 2019 but this is their first promotional item of 2020.

The sandwich was inspired by “Snoop Dogg’s passion for plant-based protein and love of glazed donuts” according to a release.

This is in addition to the Beyond Sausage Sandwich that the chain released late last year and Dunkin’ considers the new version to be a “menu-hack.” 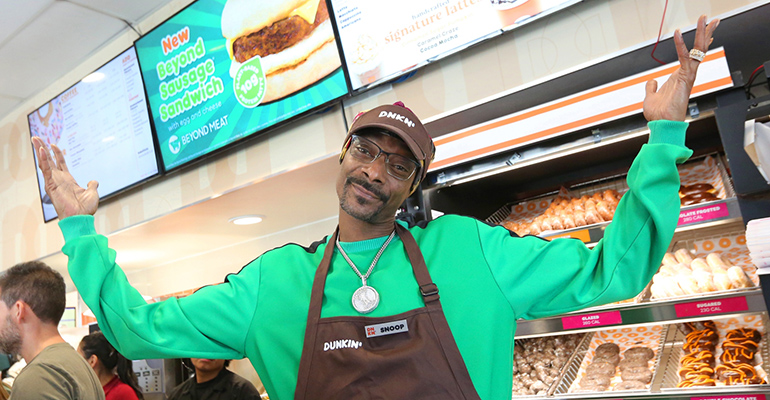 “When I got the chance to work at Dunkin’ for the Beyond Sausage Sandwich launch, I got to thinking about what other Beyond Meat sandwiches we could create. Being around my favorite glazed donuts got me inspired,” said Snoop Dogg in a company release.

Snoop Dogg has been a brand ambassador and investor for Beyond Meat, which is based in El Segundo, Calif., since 2018, and he joined Dunkin’ when the brands collaborated in 2019.

Following the release of the breakfast item, a “Beyond Bash” will be thrown at participating Dunkin’ locations where customers can enjoy a complimentary sample of the Beyond Sausage Sandwich on January 24 and 25 from 8 a.m. to 10 a.m. The Beyond D-O-Double G Sandwich will not be given out at that time.

The chain has not confirmed the pricing of the menu hack.

Additionally, the chain is planning to release a TV spot featuring Snoop Dogg working at the drive-thru of a local Southern California Dunkin’ in October of last year.

Clothing inspired by Snoop Dogg’s outfit in the advertisement will be sold for a limited time at an online pop-up shop for the chain. Items are emblazoned with Snoop Dogg catchphrases and include pieces with the words “Glazzzzy” down the side of a pair of sweatpants, a green tracksuit (similar to the one in the ad) with “Glazzzed for Days” on the back and joggers featuring Dunkin’ and Beyond icons. Additional items range from a bomber jacket to a sweatshirt to a beanie.

No word yet on when the clothing line will debut or pricing.