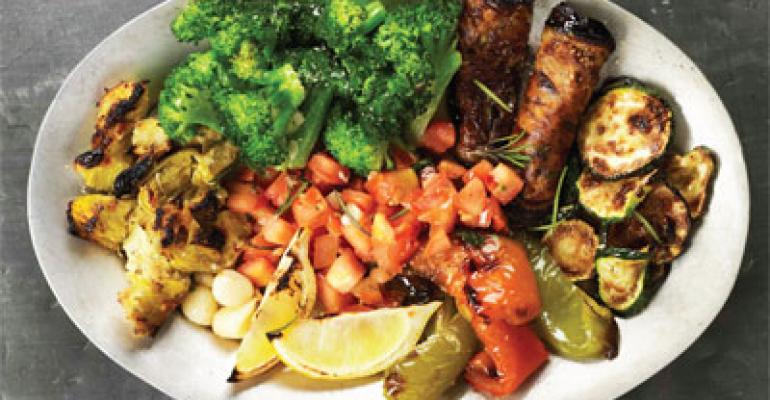 Many research and development executives do more than simply develop new dishes these days. Some culinarians are holding top management positions at large restaurant companies and are helping to chart their brands’ overall business direction.

“It’s easy for chefs to come up with items that taste good,” said Skip Weldon, senior vice president of marketing for Bertucci’s Corp., a 94-unit chain based in Northborough, Mass. “But menu items that taste good, deliver the brand and connect with consumers require strategic insight, innovative thinking and the ultimate expertise and skill set.”

“People in R&D positions are being held accountable for more than simply blue-sky product development,” said Steven Goldstein, a partner at The Culinary Edge, consultants based in San Francisco. “R&D has always been the creative role, but it seems that it’s moving to a more strategic role.”

Bertucci’s Weldon called his vice president of culinary, Stefano Cordova, a “strategic partner” and noted that R&D individuals are “critically important because they develop the ideas for our menu that ultimately create our reason for being with consumers.”

Cordova added that “for innovation to work you need someone in marketing who understands that without innovation you become obsolete within five years because there will be someone else who is more innovative who will take your business away.”

The ability to provide “direction” is a key part of the process, he said. Without that leadership, “restaurants really can’t create a point of difference, and the R&D people can’t be innovative to their full potential.”

Frank Paci, who recently was named chief executive of McAlister’s Corp. in Ridgeland, Miss., agreed. He too holds himself accountable for high-level communication at the 300-location operation.

“Everybody on the management team needs a clear vision for the business,” Paci said. “So they understand what we’re trying to do.”

Paci said David Groll, McAlister’s director culinary development and corporate executive chef, has “credibility in the system, which helps with the introduction of products.” Groll established respect among franchisees and helped build business in part by listening to customers.

“We manage the feedback system,” Groll said, “where we monitor any comments by the guests.” Besides understanding his guests’ motivations, Groll worked on the supply side of the business, so he knows how to work well with them, Paci added.

Jeff Sinelli, founder and chief executive of Which Wich, said he also maximizes relationships with food purveyors by using them to develop dishes and research options for his 126-unit, Dallas-based sandwich chain. Rather than hiring a culinary staff, Sinelli calls in suppliers’ chefs to dream up dishes. He said those chefs are the talent behind Which Wich’s newly opened R&D Test Kitchen, which is open to the public.

“We’re taking almost a transparency approach” to R&D with the new kitchen, Sinelli said, adding the exposure isn’t a problem since other chains have spied on his business anyway.

“Our competitors have already jumped into our dumpsters,” he said. “But the world is moving so fast right now with the Internet and social media,” so new items rapidly turn into yesterday’s stale news.

In fact, Sinelli said he’d be happy to see something he’s testing “on a competitor’s menu. It would just validate that they’re watching us or that we’re on the right track.”

Besides having a spot to test new culinary concepts, Sinelli opened the new Dallas R&D center partly because cooking is cool these days.

“Restaurants have changed in the last couple of years,” he said. “There has been a focus on chefs who have become almost stars. So I think people have taken a different kind of interest in food, health and allergies.

“And with that higher consciousness they’re demanding more out of restaurants,” Sinelli continued. “So for a restaurant to not have some kind of focus on R&D, they’re not paying attention to the customer.”