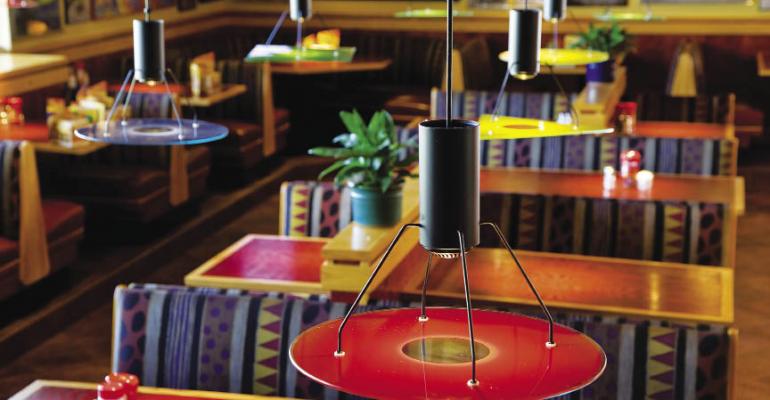 Saving money, energy and the environment were all valid reasons to pursue low-wattage lighting for use in Red Robin Gourmet Burgers’ restaurants. But ultimately it was how good the food looked under the dining table lamps that sealed the deal.

“We didn’t want to get into a cold, blue light that makes a hamburger look unappetizing,” said John Rogers, vice president of capital purchasing for the 430-unit casual-dining chain based in Greenwood Village, Colo.

Red Robin started researching lighting alternatives two years ago, and while the LED was the most energy efficient, back then the light-emitting diode only cast a cool, bluish white light. A year later, however, lighting technology had advanced to the point that LED lamps were giving off a warmer, more inviting hue. So Red Robin started changing bulbs in its 275 corporate restaurants, completing the task in late 2009.

Improved technology, a pending federal ban on incandescent lights and dramatic energy savings have more restaurant operators switching their dining room lights to LEDs. An LED uses a fraction of the energy of traditional incandescent bulbs and is more energy efficient than compact fluorescent lighting. And while LEDs are more expensive than other light bulb options, many operators say that the long-term savings justify the upfront investment.

An LED may cost between $20 and $25, compared to 75 cents for an incandescent bulb, noted Michael Oshman, chief executive and founder of the Green Restaurant Association, a Boston-based organization that issues green certification to restaurants for such efforts as waste reduction, recycling and energy use, such as the use of low-wattage light bulbs. Lighting accounts for about 13 percent of the energy use in the average restaurant.

While more expensive, a typical LED will burn for 50,000 hours, compared with 15,000 hours for a compact fluorescent bulb or 2,000 hours for an incandescent one, Oshman said.

“The old halogen lights we had had a life span of about six months, so we replaced them twice a year,” he explained. “We’re not planning on replacing any LEDs for at least three years.”

The burger chain invested about $1 million to replace halogen lights with LEDs in lamps over dining tables and in track lighting around the perimeters of dining rooms. The chain also was able to take advantage of energy rebates from utility companies for making the switch, Rogers said.

The company expects to see a return on the investment in less than two years, said spokesman Kevin Caulfield.

The cost of the bulbs and their installation is offset by the reduced energy demands, said operators and lighting experts.

The improved LED technology also comes in advance of a federal ban on incandescent lights. Under the legislation, use of 100-watt incandescent bulbs will be prohibited by 2012, and all bulbs must use 25 percent to 30 percent less energy by 2014.

The pending ban likely will have households switching to compact fluorescent bulbs. Many restaurant chains, however, have eschewed the spiral bulbs because they also can cast a harsh light.

“As we started approaching those regulations, we knew at some point we were going to have to make changes to the current lamps,” said Kevin Falconer, senior director of design for Dallas-based Brinker International, which owns 827 Chili’s Grill & Bar Restaurants and franchises another 679. Brinker also owns 44 Maggiano’s Little Italy locations.

The company last year began rolling out LED devices to its Chili’s restaurants. About 700 now have the new lighting.

Light from fluorescent bulbs is more diffused, but LEDs, where light emanates from small points, give off a directional light, like a halogen. The LED allows Chili’s to direct light more accurately, pointing it where illumination is desired. LEDs also work better for accent lighting, Falconer said.

“The LED is much more in line with how we wanted to present our food and make our guests look good,” Falconer said.