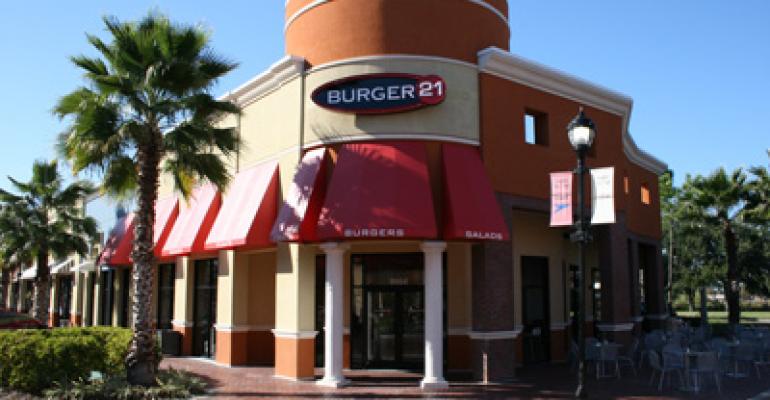 Front Burner Brands is moving ahead on three fronts.

The Tampa, Fla.-based company will introduce a re-branding initiative for its GrillSmith concept this summer, expand The Melting Pot chain into new domestic and international locales, and dive into the competitive burger battles in Tampa Bay with its Burger 21 brand.

The GrillSmith re-branding effort will steer the chain away from its current upscale positioning and move it toward the “comfort” food category, said Mark Johnston, chief concept officer of Front Burner Brands. Johnston’s brother, Bob Johnston, is the Front Burner chief executive.

GrillSmith, with six restaurants in the Tampa Bay area, has been conducting a customer opinion survey and plans to unveil the re-branding results in August, Johnston said.

“We’ve been in the market for seven years, and it was time to take a look at it to see how customers perceive the brand,” Johnston said.

GrillSmith will likely move away from a “high-end” theme and get more into comfort food, such as pulled pork barbecue sandwiches and meatloaf dishes, he said.

The average per person GrillSmith check is $26 for dinner and $14 for lunch, he said.

The company also said Billy Grimm was named president of GrillSmith in May.

While GrillSmith is being reformulated, The Melting Pot, Front Burner’s 143-unit fondue-themed chain, is slated for growth in 2011. New locations are planned for Rochester and Syracuse, N.Y.; Mobile, Ala.; Pedregal and Satellite, Mexico; and Calgary, Alberta and Toronto, Canada.

Meanwhile, Front Burner jumped into the local burger wars with the unveiling of its maiden Burger 21 restaurant in the upper-middle-class community of Westchase outside Tampa six months ago. The company has plans to open a second unit in the north Tampa community of Carrollwood this year.

Front Burner plans to grow the Burger 21 concept though franchising, with 10 locations targeted for Tampa Bay area as well as other markets in Florida, Texas, Colorado and the Northeast United States, Johnston said.

Johnston said of the burger competition: “I love it. It’s ultra-competitive. I have to say that the segment has a lot of room for growth for someone who can do it right.”

Johnston, who is confident Burger 21 can differentiate itself from the pack, divides the local burger scene into four categories — the quick-service chains, the “better burger” concepts like Five Guys, gourmet burger places such as Square 1, and the market he envisions will be occupied by Burger 21.

“Each one has found its own niche,” Tampa Tribune food writer Jeff Houck said, “and each one has a different take on it.”

Johnston said Burger 21 will stress quality. He said he pays 43 cents each for burger buns, which are baked in Chicago, and a dollar more per pound for blue cheese. Burger 21 customers pay at the counter, and a staffer brings the food to the guest’s table within five to eight minutes, Johnston said.