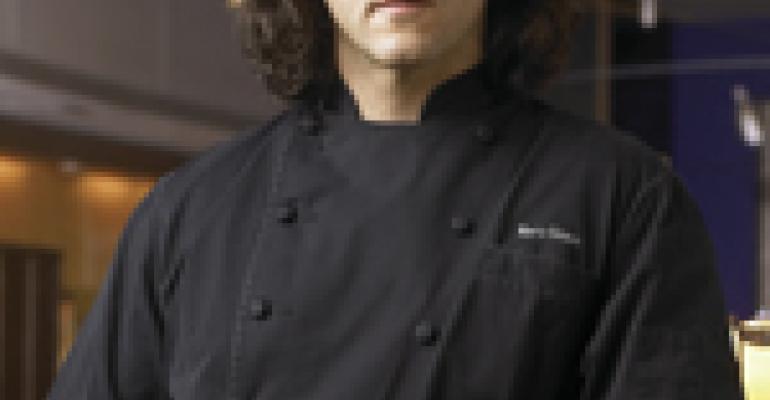 Simon - whose restaurants include Simon Kitchen in Las Vegas; Simon LA in Los Angeles; and Impala in San Francisco - teamed up with film executive-turned-restaurant specialist Jen Worthington and industry veteran Elizabeth Blau to open the 350-seat Spotlight Live earlier this month. The restaurant mixes advanced technology with ambitious fare, while cashing in on consumers' desire for 15 minutes of fame. And it brings karaoke to a whole new level, complete with stages, performance tips, a prep room, and a billboard-sized outdoor screen that allows much of Time Square to catch the act.

The 23,000 square foot venue, which was designed by Haverson Architecture and Design of Greenwich, Conn., boasts four floors and four bars with a total capacity of 650 guests. The outlet also has two stages and a private recording booth. A behind-the-scenes green room "helps guests prep for their performance, offering backstage advice from choreographers as well as professional hair and makeup artists," according to promotional materials.

Interactive tabletops enable viewers to rate and comment on the would-be stars, as well as chat online with other guests.

But guests aren't the only ones who can follow the amateur performances. A 26-foot-by-40-foot television screen on the outside of the building shows streaming video of the performers inside. The video images are also available on Spotlight Live's website.

"The restaurant crosses every demographic," Worthington said. "Everybody comes together for a totally unique experience. You're a very interactive part of the venue. Everybody that comes in here walks out with a smile on their face."

In addition to serving as associate producer for the movie Coyote Ugly, Worthington opened bars with that name in New York and Las Vegas. Worthington said America's obsession with fame and reality TV was her inspiration for Spotlight Live.

"Coyote Ugly involved interactive entertainment," Worthington said. "Everyone wants to take a piece of that entertainment home with them so I decided to take it to the next level with Spotlight Live."

Simon said he was attracted to the venue because it was so different. "I really liked the idea of Spotlight Live," Simon said. "Jen [Worthington] has reputation for taking chances and making things really cool. Also, New York is a different market for me. There's Internet and karaoke but there's also good food. How many restaurants in Times Square have good food?"

Spotlight Live's menu features several American classics with a twist, such as "Central Park" pigs in a blanket with spicy mustard and relish and French onion dip with homemade potato chips; popcorn shrimp with lemongrass aioli and chili ponzu; macaroni and cheese; and cotton candy for dessert. Simon also offers his own version of Sno Cones and Hostess cupcakes.

Some of the entrees, which have an average price of $22, include pretzel crusted pork chops with sweet potato mash; spaghetti and meatballs with cheese garlic bread; and Simon's famous Iron Chef mini burgers with bacon, cheddar cheese and truffle fries.

"The menu has something for everybody," Simon said. "It's fun food that you like to eat. I was nervous that people might misunderstand that it's a Kerry Simon restaurant but not a Kerry Simon concept."

Blau explained: "A signature Kerry Simon restaurant would be more intensive. This [Spotlight Live] is casual. It has Simon's great food product but it's not fine-dining."

Worthington, who spearheaded the concept, said she knew she "needed somebody phenomenal" to create the menu Spotlight Live.

"I've known Kerry Simon for several years and I love his food," Worthington said. "I just knew he'd be perfect. The menu at Spotlight Live is nostalgic for the adults and exciting for the kids. The food is as theatrical for the entertainment. It was a very easy partnership. We compliment each other."

Worthington likens the operation of Spotlight live to running a three-ring circus. "We really are three businesses under one roof," she said. "We have retail; food and beverage; and entertainment. The nice thing is that there's really a magic to this. The hard work does matter. To be able to personalize the DVDs and photos - it's really something special."

Avariety of merchandise is sold at the venue as well as online, including vintage rock-n-roll t-shirts, hats, personalized rock-n-roll posters, CDs and DVDs.

"Spotlight Live is about having something fun and something to remember," Simon said. "You can get up on stage and take a chance. Karaoke is so popular because you've got the stage all to yourself for those minutes of the performance. Whether you're a business man, parent or teenager, you have opportunity to be something else for a few minutes."

The trio plans to expand the concept in Las Vegas next, followed by outlets in Orlando, Fla., and smaller cities nationwide.

*For an insider's look at Spotlight Live, click here.*