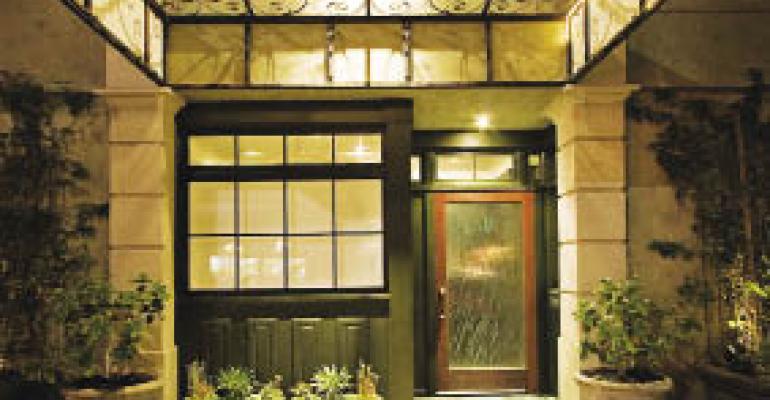 Southern Californians tend toward casual, not formal dining. But that’s in part why Citrin created Mélisse as something “over the top” when he opened the restaurant in 1999.

“There’s a need for this level of dining,” said Citrin, the restaurant’s chef-owner. “We make people feel like kings and queens. They want to have a place for a special night where they can hear the other person talk.”

A native of Santa Monica, Calif., the beach-side neighbor of Los Angeles, Citrin taps the bounty of local farmers markets for the menu at Mélisse and aims to elevate top-quality ingredients with complex dishes and a refined setting.

In the short time Michelin has published a guide for the Los Angeles area, Mélisse was one of the few to earn two stars in both 2009 and 2008.

LA Weekly food critic Jonathan Gold wrote in 2008 that Citrin seemed to have created Mélisse “as a Michelin-worthy restaurant by force of will alone, imposing luxury ingredients and luxury prices on a local public that seemed happy enough to eat its seared venison without the benefit of Christofle silver, velvet purse stools or airy sauces inflected with fresh black truffle.”

However, Gold continued: “His two Michelin stars are real. The truffled corn ravioli is a revelation. And his cuisine, which uses farmers-market produce and modern kitchen techniques without calling attention to itself, has shed most of its baby fat — the cassoulet of white asparagus with morels, the melting Copper River salmon and the butter-soft duck breast at a spring dinner all brought out the soulful essence of the ingredients in the least showy way imaginable.”

The restaurant’s menu changes with the seasons, but options might include a prime beef rib-eye cap served alongside a braised Wagyu beef cheek with potato galette, Swiss chard, carrot and Bordelaise jus; or a duck breast might be served alongside a duck leg confit with black rice, salsify, hibiscus and chestnut cream.

Some dishes have remained on the menu since the beginning, with seasonal variations, like the poached egg with caviar and lemon-chive crème fraîche, Dover sole served tableside and a traditional French côte de boeuf rôti for two.

This fall, Citrin has been making good use of white truffles with dishes such as fresh tagliatelle with grated white truffles, Parmesan and brown-butter truffle froth. It’s a $115 dish, as are most of the truffle-topped options.

Mélisse is undoubtedly one of the most expensive restaurants in the Los Angeles area, with a chef’s carte blanche menu starting at $250.

Lately, the restaurant has been shifting away from its long-time à la carte offerings to emphasize prix-fixe menus, though still at high-end prices. Multicourse menus start at $105, for example.

The average check per person is about $180 with beverage, said Citrin, and guests are not shy about requesting the addition of shaved white truffles to dishes for a $65 supplement.

Despite the recession, Mélisse has been busy. Citrin said the restaurant is on track to hit $3.4 million in sales this year with 100 seats and dinner service only Tuesday through Saturday.

Ken Takayama, Mélisse’s chef de cuisine, has also been garnering attention as a “Rising Star” – designated by the website StarChefs.com.

When asked if he would consider opening a second location of Mélisse, Citrin shrugged and said, “Never say never.”

Then he added, “I don’t want to dilute the brand.”

RELATED: Read more about other inductees in this year's Fine Dining Hall of Fame