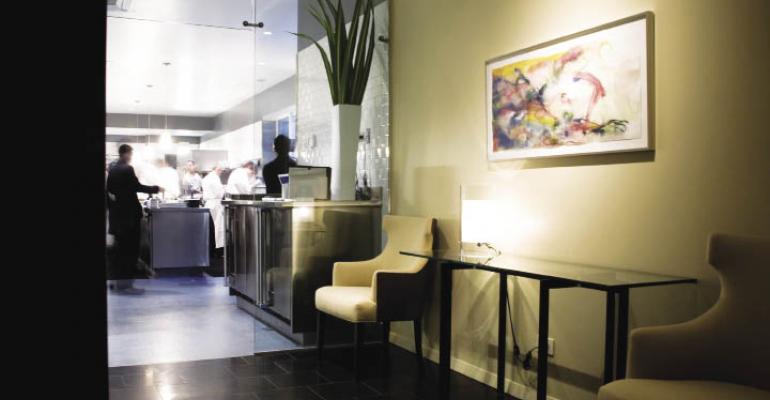 Of all the tongues in all the mouths of all the chefs in the world, the one belonging to Alinea’s Grant Achatz has to count among the most illustrious. Taste is by no means the only — or even the primary — sense that Achatz courts. But none of his storied theatricality and avant-garde verve would matter as much if not for the way his food works, simply, as food.

All of this made Achatz’s sudden and startling bout with fate three years ago like the stuff of Greek myth. After doctors found a rare form of cancer in his mouth, some suggested he would be lucky to keep his sense of taste — not to mention his tongue, three-quarters of which could have feasibly needed to be removed.

It didn’t end up that way. Radiation and chemotherapy made Achatz cancer-free. But it’s easy, still, to imagine the whole ordeal as something akin to Icarus flying too close to the sun with his wax wings.

Grand proclamations and a heightened sense of drama have been attached to Alinea from the beginning, when the restaurant opened in 2005 in the Chicago neighborhood of Lincoln Park. Achatz had worked already with Thomas Keller at The French Laundry and garnered good attention, including receiving a James Beard Rising Star Chef award as executive chef at Trio in nearby Evanston, Ill. But Alinea shot him even closer to the stratosphere. As it settled into operation, stories drifted out describing wildly experimental five-hour meals with things like linen pillows that would be squeezed to scent the air in time for bites into certain dishes. Anecdotes spread of interesting concoctions involving rhubarb. Many people, subscribing to what seemed like a new way to think about food and restaurants both, cried “Genius!” Certain others dismissed it all as merely a show.

For his part, Achatz kept thinking about new ways to alter the experience of dining out. Among his alterations was the idea of thinking about food in a context inclusive of more than just sustenance. In a recent interview with Epicurious, Achatz said, “Food is a necessary component to life. People can live without Renoir, Mozart, Gaudí, Beckett, but they cannot live without food.”

How many chefs would think to compare what they do to an Impressionist painter, a lionized musical composer, a fantastical architect or a bawdy Modernist writer?

Maybe, in truth, many would. But few would have similarly legitimate grounds. And perhaps it’s true that none of these matters as much as food itself, which can transform from something simple to something majestic with just the right touch. Take, for instance, an example from Alinea’s current menu: pheasant with green grapes, walnut and burning leaves.

RELATED: Read more about other inductees in this year's Fine Dining Hall of Fame