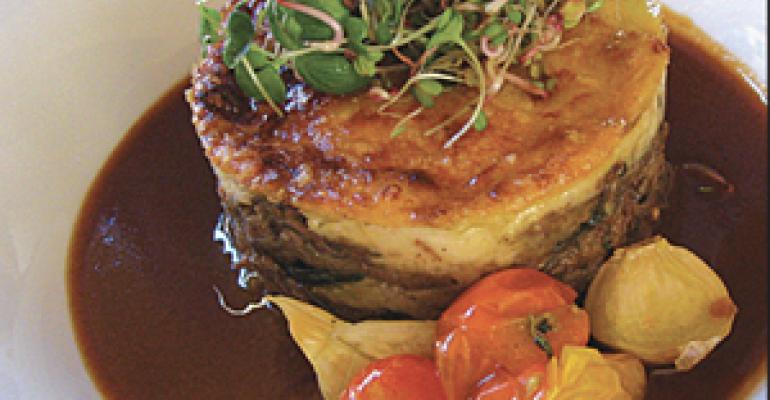 In February, Acqua Pazza, an upscale restaurant in midtown Manhattan featuring creative Italian food, will close for a makeover. It will reopen not as a more casual trattoria, nor as a Tuscan steakhouse, but as Anthos, named for the Greek word for blossom.

“Symbolically, it’s a birth, and I’m hoping for it to be the beginning of a new way to look at Greek food,” says the chef, Michael Psilakis, a former T.G.I. Friday’s manager who, by reinterpreting the Greek food of his childhood, is beginning to receive recognition for his cooking in New York City.

In fact, the perception of Greek food in America already is changing.

“Greek food is enjoying not a renaissance, but a discovery,” says another Greek-American celebrity chef, Cleveland-based Michael Symon. He operates three restaurants—Lola and Lolita in Cleveland and Parea in New York City.

In many ways, Greek cuisine in the United States is where Italian-American food once was. Mainstream perceptions of the food—greasy gyros, casserole-like dishes such as moussaka, sticky sweets like baklava—“are almost now more American than Greek,” Symon says, much as spaghetti and meatballs and other “Italian” menu items are American creations.

Although those Greek dishes do, in fact, exist in Greece—often in cheap tavernas—the ancient, geographically diverse nation, like Italy, enjoys great diversity in its cuisine. Hearty braised dishes are cooked in the mountains, while grilled fish and simple sausages are found in Aegean Sea islands.

Greece also has long been on vibrant trade routes that have brought spices such as cumin and coriander to the cuisine.

“If I make a Bolognese, I’m going to put cinnamon in it because I can’t help it,” Psilakis says.

In the United States, Symon observes, “there’s a continuing trend in dining of people trying to use superseasonal, superfresh, locally driven ingredients that are relatively clean in presentation. To me, that’s the heart and soul of Greek cooking,” he says.

At Lola, during rabbit season he buys the animals from a local farmer and marinates the loin in olive oil, garlic, orange, lemon zest and rosemary. Eight hours later he wraps the loin in a brined grape leaf and then wraps that in buttered phyllo, “so it’s about the size of a big cigar,” Symon says.

“The great thing is that the grape leaf holds the moisture in,” he adds. That serves the dual purpose of keeping the rabbit moist and the phyllo dry. “When the phyllo’s golden brown, the rabbit’s at a perfect 155-160 degrees,” he says.

As for misperceptions, Symon observes, “When Mario [Batali] opened Babbo [in 1998], a lot of people said it wasn’t Italian, when really it was as Italian as the greatest Italian restaurants in Manhattan,” it was just Italian food they didn’t already know.

Symon says although his guests in both Cleveland and New York are receptive to Greek menu items they weren’t aware of before, “where you come up against it, oddly enough, is second-or third-generation Greeks” whose perception of Greek food not only has been altered over the years, but also might have been limited to the region their family came from.

So sometimes it is best to ease guests into new ideas. For example he calls that classically flavored rabbit dish “rabbit strudel.”

He also had some explaining to do when tomato season ended and he took tomato salad off of the menu. “People were like, ‘This is a Greek restaurant, you have to have a tomato salad,’” he says.

At Parea, Symon says his chef there, Jonathan Sawyer, braises lamb shank and serves it with yogurt dumplings.

He strains the yogurt of most of its moisture and folds it into a batter. Then he boils it and sautées it with the lamb jus and some vegetables. It comes out “almost like ricotta gnocchi,” he says. The lamb is glazed to order with Greek lavender.

For his version of dolmades, which are traditional grape leaves stuffed with rice and ground lamb, he uses beef short ribs and, being of Italian extraction, Arborio risotto made with wine, stock and Parmesan.

He folds the beef into the risotto, adds cinnamon, dill, and mizithra and kasseri cheeses. Then he adds dill, lemon zest and truffle oil, wraps the mixture in brined, blanched grape leaves and steams them. He serves three of them on a rectangular plate with warm mayonnaise and a truffle-citrus foam—a sort of deconstructed avgolemono—for $9.

To make the foam, he prepares a mushroom stock with diced onion, celery and shallot. He reduces it, adds truffle purée, truffle oil and lemon juice. Then he adds butter and whips it into a foam with a hand mixer.

For his moussaka, he uses slowly braised beef cheeks instead of the more traditional ground lamb. He braises the beef in a light veal reduction with some aged sherry vinegar.

For the same dish, he dries cherry tomatoes for two days and then tosses them with citrus and sea salt. That accompanies the dish, which he tops with micro arugula. He charges $22 for it.

Psilakis’ moussaka, served at his high-concept Greek-inspired restaurant Onera in New York, was a sort of Napoleon, with layers of pulled, braised goat, pasta, blanched potatoes, béchamel, and eggplant sautéed in olive oil and brushed with cinnamon. They were layered in a cylindrical mold.

At Anthos, he plans to make a pork dish involving the rack, belly and shoulder. The shoulder will be roasted and mixed with rice and fennel, wrapped in cabbage, glazed with lemon and tied with a leek for what is a traditional preparation called lahanodolmades, or stuffed cabbage.

The belly will be braised with fennel, cut square and put in a small bowl with the braising juice made into a type of avgolemono. Then the rack will be roasted to a medium level and served with fennel purée and candied lemon.

At Molyvos, an old-school, upscale Greek restaurant in New York, chef de cuisine John Piliouras says they also like to serve modern takes on items such as moussaka—he uses sheep’s milk yogurt instead of béchamel—baklava and plain grilled fish with lemon wedges. And they explore the Greek food world for lesser know dishes.

Noticing the raw fish craze, be it sushi, Italian crudo or Latin American ceviche, they researched and found the Greeks prepare a similar dish called “marinato.”

At the moment Piliouras is working on Maine sweet shrimp marinato. “They don’t come from Greece, but we use a Greek-inspired cure.”

It includes lemon juice, hot pepper, horseradish and olive. The shrimp sits in that mixture for three to four minutes.

“This is something that’s actually a very, very old custom in Greece. You just don’t see it in the mainstream a lot,” he says.

To add crunch, he is soaking the shrimp heads in buttermilk and coating them with cornmeal and semolina, and then frying them. Deep-fried shrimp heads and bodies are a common accompaniment to raw shrimp in Japanese cuisine.

He keeps the heads crunchy by placing a daikon sprout or other herb on top of the marinato. Each head is fried to order and placed on top.