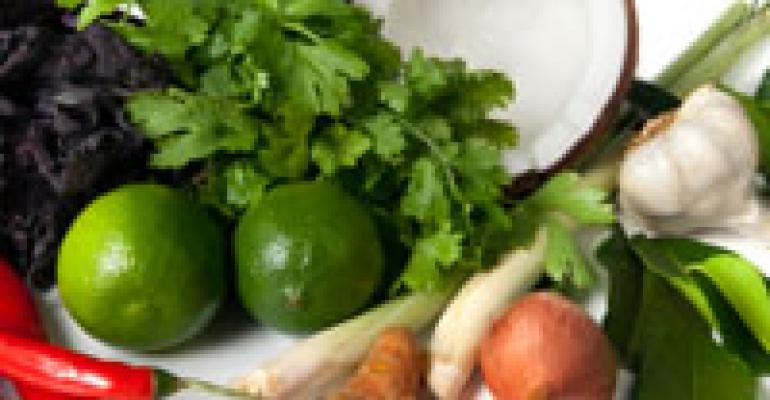 Mintel, citing data from its “Global New Products Database,” said consumers appeared to be stretching beyond the relative comfort zones of the “big three” ethnic cuisines — Italian, Mexican and Chinese — to sample new tastes. As a result, the number of retail items that contained the words “Caribbean,” “Japanese” or “Thai” in their description grew rapidly between 2009 and 2010.

“Thai” was used 68 percent more often during that period, “Caribbean” was mentioned 150 percent more, and “Japanese” saw a jump of more than 230 percent, the Chicago-based research company found.

And while the foodservice industry has been a little slower to tap into those expanding ethnic culinary areas, a growing number of restaurateurs are beginning to broaden their culinary horizons as well.

For example, the 514-unit Boston Market introduced a Caribbean-inspired Island Mojo sauce and a Sweet Thai Chile Garlic sauce last spring. T.G.I. Friday’s featured Caribbean-style ribs, steak and chicken during a promotion last summer. And one of the new items added to the menu at the 145-unit Mimi’s Café last fall was a Thai Chicken Noodle Bowl.

In a recently released survey, Port Washington, N.Y.-based consumer research group NPD asked consumers what ethnic or regional flavors were present in lunch or dinner menu items they ordered, and found a 3-percent jump in the mention of “Japanese,” the largest increase in percentage terms of any ethnic category.

Mintel asked consumers where they learned about new “ethnic” foods, and 26 percent cited television programs, newspapers or magazines that featured cuisines from other countries. Cookbooks were the source for 23 percent of respondents, while 25 percent said they learned about new cuisines because they live in ethnically diverse neighborhoods, and 18 percent learned by traveling abroad.